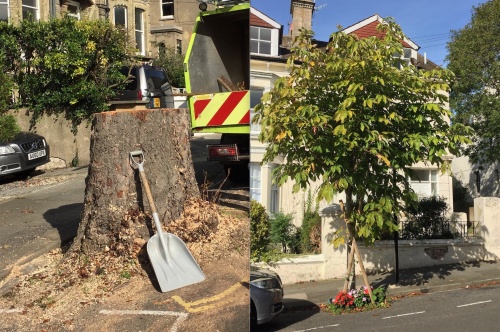 Springfield Road residents are appealing for help to protect and replace dying conker trees. The road has been tree lined since it was built, but with age and climate change a canker bug has meant some have to be felled, with several others on the danger list. With council budget cuts there was no assurance these would not be lost forever without community action to assist securing the sites and replanting for the future. Residents association Vice chair Edward explained:

‘When council workers came to fell another tree we were all horrified, and we realised everyone had been expecting someone else to do something. It was a real wakeup call to see ugly gaps in the road where a tree had stood for over a hundred years. Through the crowdfunding site we are asking people to come together to secure replacements. It is something we all owe to the street, and to the future generations who live there.”

It is hoped that the crowdfunding model used together with leafleting can be rolled out to other threatened sites locally. As Edward explained;

“We have no problem with anyone copying the work we have done, both on the net and in leaflet design, to roll it out for their own site. It would be great to think we have started something even bigger.” The replacement trees will be canker resistant - ‘Aescylus Indica’ – which also bear conkers, and while they flower at a slightly different time to the previous species some consider the flowers are actually more beautiful. It is also claimed that in their native Himalayas the conkers are regarded as edible, dried and powdered and mixed as a flour type substitute. The residents association will welcome any feedback on that in the next few decades.

Donations can be pledged on the dedicated ‘spacehive’ website www.spacehive.com/springfield-road-trees