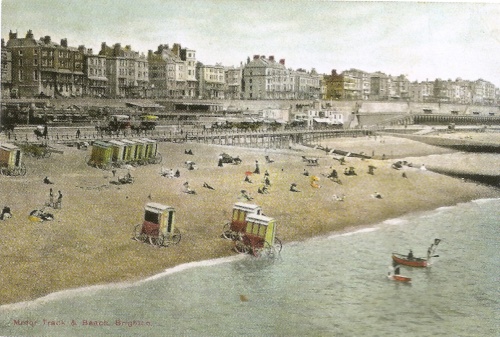 Victorian and Edwardian bathing machines at Brighton were brightly painted and had curved, stepped roofs

High summer and school’s out! Off to the beach…Our love of the seaside dates back centuries, originating with the spas visited for therapeutic purposes. In around 1626 a natural spring was discovered beneath cliffs near Scarborough, mineral water that proved an effective remedy for minor ailments. Sea water began to be identified as having similar curative properties to spring water and learned medical publications extolled the benefits of both sea bathing and drinking sea water. Subsequently Scarborough evolved into a sophisticated commercialized town, Britain’s first seaside resort; by the mid-1700s Brighton, Margate, Weymouth and other well-appointed coastal settlements were also attracting a wealthy, fashionable clientele.

From an early date, novel contraptions broadly termed bathing machines were provided for those following the new trend for sea bathing to improve their health – essentially wooden huts on wheels that were pulled into the sea by a horse or, where too steep, via capstan and rope. The first known depiction of such a conveyance appears in John Settrington’s 1735 topographical view of Scarborough, while the earliest known written record is diarist Nicholas Blundell’s description of a ‘Conveniency for Bathing in the Sea’ at Liverpool, 1721. Indeed, the word ‘machine’ is misleading and various regional names were used: for example, Dr Richard Russell (1687-1759), the Lewes physician who helped to popularise Brighton as a sea resort, referred to the Sussex models as ‘bathing chariots’ in his influential Dissertation on the Use of Sea-Water in Diseases of the Glands, published in 1752. Patrons about to take a dip would queue on the beach to pay a hire charge, and when a machine became available stepped inside the dark room to remove their street clothes – often an unsteady operation as the machine lurched into the waves.

Historically men usually bathed naked, although undressing in private rendered their descent into the water a little more decent. Georgian and Regency ladies generally changed into a cap and loose linen bathing gown, outfits resembling those already used at spas. Hefty female attendants called ‘dippers’ helped to lift bathers into the water and assisted with the required number of therapeutic dunkings, for there was little active swimming, but much bobbing about and periodic submersions. The famous Brighton ‘dipper’ Martha Gunn (1726-1815) supervised the Prince Regent, who favoured the burgeoning seaside resort of Brighton and was a regular bather. In honour of her loyal service, she was portrayed several times; she lived at 36 East Street, Brighton and is buried at St Nicholas’ churchyard.

The bathing machine - a seemingly curious invention - transported the sick and infirm across the beach, into the sea and back. Since undressing in public was deemed improper, it also provided bathers with a convenient space in which to disrobe and stow their belongings. Initially mixed bathing was customary, but even bathing attire was regarded as immodest and some machines were designed to offer privacy to individual bathers, as well as shielding them from onlookers. Edward Hasted described the beach at Margate in 1810 as “... so well adapted to bathing, being an entire level and covered with the finest sand….the bathers are driven in the machines, any depth along the sands into the sea; at the back of the machine is a door, through which the bathers descend a few steps into the water, and an umbrella of canvas dropping over conceals them from the public view. Upwards of 40 of these machines are frequently employed...”

In the early-1800s hiring a bathing machine was still a luxury, a fashionable toy for the rich, according to some commentators. However, with the coming of the railways, which facilitated much quicker and cheaper travel to the coast, the exclusivity of sea bathing rapidly declined. Visitor numbers to Brighton soared from tens of thousands travelling by stagecoach throughout the whole of 1837, the year of Queen Victoria’s accession, to over 70,000 train passengers in just one week in 1850. Health was no longer the main objective when visiting the seaside, but relaxation and entertainment.

Victorian beaches grew increasingly crowded with working-class day-trippers and wooden bathing machines were a familiar sight. It was considered inappropriate to use the sea without one and hiring out machines during the season provided welcome income for the proprietors, often local boatmen, fishermen, publicans and other traders. By the 1860s, in response to pressure from middle-class holidaymakers, many seaside resorts operated segregated male and female bathing areas, although typically they were separated by only a short distance. The style of machines at different resorts also varied: some followed the Margate model with collapsible canvas hood at the sea end, while many along the Sussex coast were built in the tall sentry box style with a narrow doorway and large wheels. In Brighton, late-Victorian and Edwardian wooden machines designed by inventor Hugo Westman featured a slightly raised, arched roof, to limit exposure to the wind. Inside, most machines were simply furnished with a wooden bench, mirror and high pegs or hooks for hanging clothes and hats.

After decades of Victorian prudery, from the 1890s beachgoers demanded mixed bathing again, encouraged by the liberal ambience at French and other Continental resorts. Now that both men and women were suitably clothed for swimming, strict segregation seemed unnecessary and shared beach facilities started to develop nationwide. Although considered rather daring at first, it was also becoming acceptable to cross the beach wearing a swimsuit, so private machines for changing and entering the water began to grow outmoded. By the turn of the century canvas changing tents appeared on beaches - initially round military-style bell-tents, and later clusters of tents of varying shapes, some coloured and striped: erected by local councils or by private individuals, they were hired by the day or longer periods. During the early-1900s most beaches offered both movable machines and fixed tents, to cater for all preferences. Traditional machines lingered on in certain resorts during the 1920s and 1930s, the last relics disappearing with the Second World War. Some even had their wheels removed and became the stationery beach huts that after the war would characterise many British seafronts.