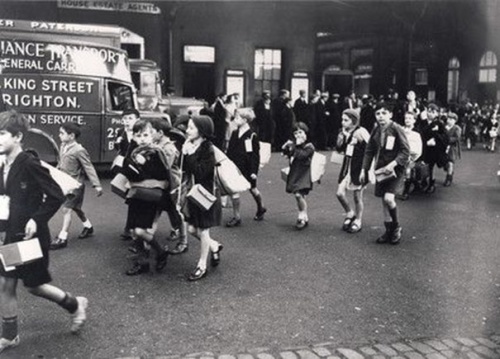 Over the years, Brighton has taken up many identities – the “hospitable hostess to countless seekers for holiday and health”; the spiritual home of the “dirty weekend”; the unofficial gay capital of the UK; the UK’s hippest city… But in September 1939, Brighton took on what must be considered its most audacious role, that of National Foster Mother!

The order to ‘Evacuate forthwith’ was issued on the 31st August 1939 and set-in motion Operation Piped Piper: the evacuation of mothers, children, the elderly and disabled away from Government designated danger zones, to supposedly safe areas around the country. In the next three days, 660,000 evacuees left London and approximately 31,000 arrived in Brighton.

Upon Brighton more than upon any other town in the kingdom has been placed the duty of looking after the children of the nation. It is both our burden and our pride. (Brighton Herald 2/9/39)

Local newspapers were quick to reinforce the image of Brighton as an accomplished foster parent and promote a programme of physical and moral improvement for the “poor” evacuees.

Come to us, we smile to them, out of your crowded streets, out of the dangers of the enemy bombs, out of the rush and hurry and turmoil where child life has been but a scant chance. Come to us, children. We shall send you back into peace stronger, healthier, better fitted than you would ever be otherwise for the years of responsibility that lie before you. (Brighton Herald 4/9/39)

But away from the rhetoric and the positive spin, the authorities realised what a mammoth task they had ahead of them and the huge potential for things to go wrong for the evacuees and their hosts. In September 1939, Brighton was the biggest reception area for evacuees in the country.

Earlier in the year, Brighton’s teachers had carried out a census of billeting arrangements, but this was an exercise in determining billeting capacity, nothing more. So, right from the start, as the Chief Evacuation Officer for Brighton recognised “the makeshift manner of evacuation and billeting created many problems.” (Argus 25/10/39)

On a national level, Richard Titmuss, a commentator on social policy, noted the indiscriminate handing round of evacuees in the billets of 1939 and believed that this inevitably resulted in every conceivable kind of social and psychological misfit.

Certainly, relationships between many hosts and evacuees challenged Brighton’s caring image. The Brighton Appeals Tribunal regularly dealt with complaints from foster parents about the cleanliness, head-lice, enuresis (bed wetting) and clothing deficiencies of the children in their care. And such complaints just as regularly led to accusations that the wealthy were trying to avoid billeting.

Requests for exemption to billeting did, however, come from all classes. From people The Argus (18/9/39) rather scathingly called ‘misguided individuals’. A range of reasons, beyond the condition of the evacuees, were cited including ‘I’m just too tired’!

Sadly, there were some foster parents who genuinely could not cope. In one extreme case, a Brighton housewife, with three evacuated children in her home, committed suicide by swallowing disinfectant and aspirins.

Even after a child was billeted there was still no guarantee of Brighton’s caring foster mother relationship. Two girl evacuees were shown around their new home in Ditchling Road, in the company of their billeting officer. The bedroom had a double bed with a satin bedspread and cosy eiderdown. After taking their foster parent’s dog for a walk, they returned to find the bed stripped and all their food gone.

It wasn’t all bad though; there is evidence of Brighton performing the role of foster mother well. One woman continued to care for 15 evacuee boys, even after she had given birth to stillborn twins and her husband had left her. She went as far as to sell some of her furniture and pawn her wedding ring to buy bedding for the boys. (Brighton Herald 27/11/39)

Alongside plans for the general welfare of the children, arrangements had to be made for their education. The Ministry of Health asserted that the early resumption of school life in reception areas was possibly ‘the most helpful single action for the children and for the householders with whom they are billeted’. St Luke’s Primary School in Queen’s Park Rise started the new term on the 6th September but, because of the number of evacuees, were unable to provide full-time education for everyone, instead they set up a double shift system. Barbara Walker, a former St. Luke’s pupil, remembered ‘…we had to share the school. We had a London school that used to come in from 1pm to 5-6pm’.

According to the School’s Head Teacher’s Log no attempts were made to assimilate the evacuees into the existing body of pupils. This decision, undoubtedly, led to territorial friction between the two groups. Indeed, Keith Bergin, another St Luke’s pupil, confirmed they left notes ‘for the intruders’ in their desks.*

The split shift system also meant that the children had a lot of free time. It seems, however, that Brighton did well in managing this and fulfilling its early promise to improve the evacuees’ lives. Evacuee Stan Ford recalled taking part in lots of organised activities including watching the Brighton Tigers (ice hockey), outings to Hove and Preston Parks and harvesting sugar beets. From St Luke’s School, boys were taken to work on a farm near Woodingdean and others went potato lifting near Lewes. The Brighton Craft Centre taught evacuees metal and woodwork.

Things did, of course, change. Nationally, by January 1940 only 55% of unaccompanied children were still in reception areas. In Brighton, many evacuees trickled back to their homes during the period known as the Phoney War. More moved away once it was recognised that Brighton was itself a danger area, and not the haven for the nation’s children as originally supposed. Brighton’s big role as National Foster Mother came to an end.