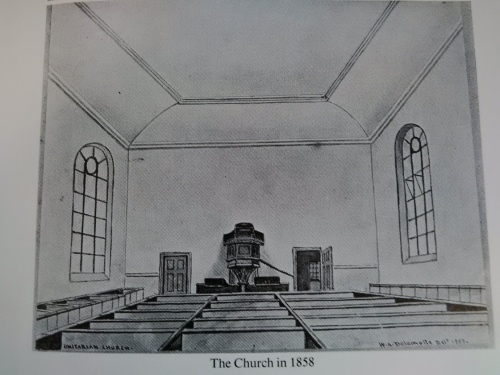 Interior of church in 1858 by William Alfred Delamotte. All seats were free – congregation members did not have to pay for their pew. Image courtesy of Royal Pavilion & Museums, Brighton & Hove.

During this year’s festival season, New Road will be positively humming with activity. If you find yourselves there, on the way to the Dome theatre perhaps, watching a street performance or just sitting outside a pub soaking up the festival spirit, take a minute to look at the buildings around you. There is one, in particular, different to all the adjacent buildings that I think is definitely worth exploring.

Brighton Unitarian Church: many will recognise its exterior – the Doric columns and steps where people sit to eat their lunch and some take refuge from the wind and rain to bed down for the night - but fewer will know what it is like inside and what goes on behind the big red doors.
This church has, however, been part of Brighton life and its Regency streetscape since 1820. Indeed, the land on which the church was built belonged to the Prince Regent; it was part of the Pavilion gardens. But in March 1819, when the Prince once again found himself in urgent need of money, he sold it for the sum of £650. The Trust Deed that the Prince signed states that the land was purchased for the use of “... a Society of Protestant Dissenters established or intended to be established in Brighton”.

And dissent and non-conformity is where the story of Unitarianism in Brighton begins. In 1793, nineteen people were expelled from Brighton’s Baptist Church, principally because they rejected the Orthodox Church’s ideas about eternal punishment of evildoers and of predestination – that anyone God had not already picked for heaven was headed for everlasting Hell. At first they met in each other’s houses, then in a small chapel in Jew Street, in July 1812 they moved to Cavendish Street, but by 1819 the congregation had grown sufficiently to make buying the land from the Prince Regent possible. A subscription list was opened and between them they raised enough money to erect a building on the site.

Dr Morrell, the first minister, believed that the ideal modern church should be designed on the lines of a classical Greek temple. Therefore, the building was based on the Temple of Theseus in Athens becoming what Dr Sue Berry (author of Georgian Brighton) describes as, “one of the first classical places of worship in the city”. Amon Henry Wilds, who was responsible for much of Brighton’s fashionable Kemp Town, was chosen as their architect.

Unsurprisingly perhaps, the striking facade did not appeal to everyone. The Royal Brighton Guide of 1827 dismissed it contemptuously as “built after the manner of a heathen temple”. Still The Stranger in Brighton (1822) commended it as “this very elegant and truly classical building”. Regardless of these differences, the ministry of Dr Morrell appears to have been successful with 350 attending the opening service on the 20th August 1820.

The pediment on top of the columns was originally engraved with ancient Greek script which, translated, was a New Testament quotation: “To God only wise, be glory through Jesus Christ.” This was covered over in the late 1800s because few people could read ancient Greek, and cabmen were given to telling visitors that the place was a synagogue, and the lettering Hebrew. Over the years, the church has had a habit of calling itself different things to reflect changing attitudes: Unsectarian, Free Christian Church, Christ Church (Unitarian), but since the Second World War it has been known simply as Brighton Unitarian Church.

Keeping abreast of changes in attitudes and learning appears key to Unitarian thinking and a very successful adjunct to the church was the Sunday school and lecture hall. This was built on an adjacent plot of land, originally intended as a burial ground. Dr Morrell, who had set up a progressive boys’ school in Hove, brought all his pupils along, including Isambard Kingdom Brunel, the famous engineer; C P Scott, owner of the Manchester Guardian (now the Guardian) and Henry Solly, director of the London and Brighton Railway.

During the week the hall was taken over by an array of different groups: in the 1890s a Young Men’s Mutual Improvement Society met there; a Ladies Society (later the Women’s League) which met for music and conversation, flourished for a long time. A reading circle was started in 1906 and a Glee Society a year later. As time went on, there was a badminton club, dramatic society and discussion groups: topics under discussion in 1933 were the influence of the cinema on the young and the state of Brighton’s slums. During both world wars, the lecture hall was used by sewing parties making clothes for servicemen.

Next to building the hall, the greatest change to the appearance of the church took place in 1927. It is hard to imagine now, but when originally built, the Doric pillars had been almost impossible to see, because metal railings and a thick growth of evergreen shrubs stood in front of them. The Brighton and Hove Herald commented that the change has “altered the appearance of the buildings from a tomb to a temple”.

Successive ministers and congregations have had to work hard to maintain the integrity of this lovely building and, at times, this was not an easy task. The building has, however, lived on, providing a sacred space for generations of worshipers and a venue for countless community groups, music, art and craft. Not forgetting, of course, all the weddings, child namings and funerals that must have taken place there.

As always, Brighton Unitarian will be playing a big part in this year’s Festival with an interesting programme of events planned. Sadly thought, there is now a question over its long-term future. English Heritage has just placed the building on its At Risk Register, due to urgent work needed to the portico. An application has been made for Heritage Lottery funding and serious fundraising plans are in hand to ensure that this Grade II list building, part of Brighton’s Regency heritage, is not lost to future generations and future festivals. check Brighton Unitarian’s website to find out what is going on there during the festival www.brightonunitarian.org.uk 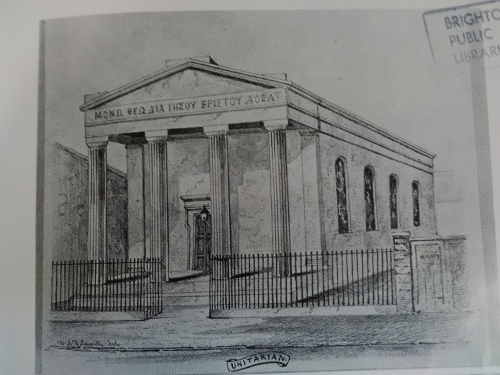 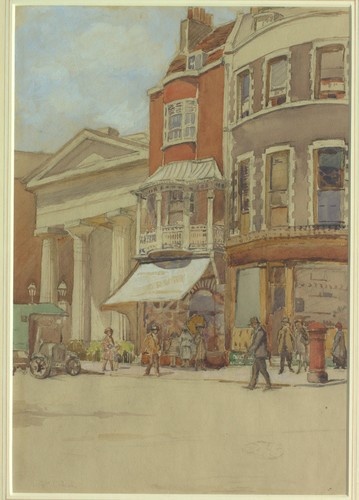 Watercolour by Grace Marion Collcutt. She lived in Brighton in the 1920s. Perhaps the congregation was going for a trip in the charabanc. Parish records tell us that in 1934 a group from the church visited, of all places, the Green’s Sponge Factory! Image courtesy of Royal Pavilion & Museums, Brighton & Hove. 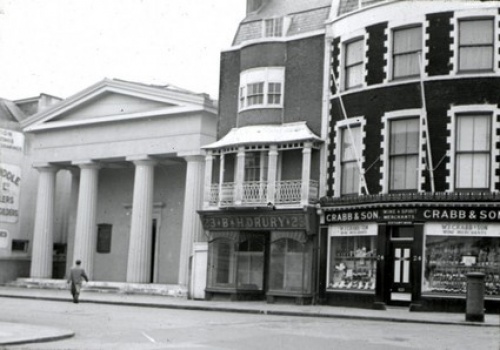 In 1952 the building, known at that time as Christ Church, was Listed as Grade II. Image taken from magic lantern slide. Courtesy of Royal Pavilion & Museums, Brighton & Hove