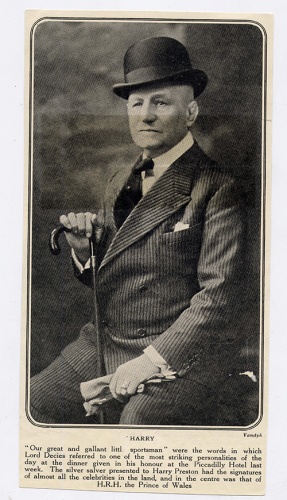 In February I usually write something connected to Valentine’s Day: times in our past when the tradition of courtly love, romantic love and even mass-produced, commercial love flourished. However, the focus of this month’s article would not, I fear, be considered a heart throb – a little too short, a little too manicured, with a passion for a little too much cologne! But, and this is a huge but, there is no doubt that he was a man with an enormous heart, “The friend of Princes and the prince of friends” (Brighton and Hove Herald, 15th August 1936).

(John) Harry Preston was born in Cheltenham in February 1860 and was well over the age of 40 when he arrived in Brighton. Up until then he had no special celebrity; in his early years he had been a keen boxer, later he moved into hotel management and ran establishments in Ramsgate and Bournemouth. It was not until he took over the management of the Royal York and then the Royal Albion Hotels - both almost derelict – that he was catapulted to fame.

You could say Brighton made Harry and in return he helped to make Brighton, or perhaps “revive” is more accurate. At the beginning of the 20th century, when Harry arrived, the town had descended into a shabby lethargy, a place the wealthy no longer visited or considered “smart”. Brighton had, in fact, become a bit of a joke. But when the Daily Mail published a front-page article which said the town was an, “unenterprising, unattractive and outdated holiday resort”, a very indignant Harry stepped in. He insisted on seeing the editor, Kennedy Jones, and convinced him of the error of his ways (made him an offer he could not refuse perhaps!) Two days later a much more flattering review was published. From that point on Harry invited editors, writers, the prettiest actresses, the richest financiers and the newly established class of “celebrity” to stay at his hotels, gave them caviar and champagne, flattered and cajoled them. By the 1930s, The Royal Albion was the town’s leading hotel, where even the Prince of Wales was entertained by Harry Preston.

Making friends and influencing people clearly worked, as did all his efforts to get Brighton known as the “mecca of the motorist”. Since the very first Motor-Car Day, 14 November 1896, when motorists drove from London to Brighton to celebrate their emancipation from the law which required a man with a red flag to walk in front of their vehicle, Brighton had been considered a motoring centre. Following an approach from the RAC, Harry took this distinction further by promoting a scheme to have a tarmac surface laid on Madeira Drive to be used as a motor racing track. Despite heavy opposition, Harry won the day and Brighton’s first Motor Race Week was held in July 1905.

Harry had a good instinct for creating scenes of novelty and excitement and his love of flying and flying machines provided the perfect means with which to do this. On the 15th February 1911, Oscar Morrison flew his plane 40 miles from Brooklands, Surrey to Brighton in less than 60 minutes and Harry hosted a banquet at the Royal Albion to celebrate his arrival. In truth Morrison’s time could have been quicker, but he got lost mistaking Worthing for Brighton. A few months later, on the 6th May 1911, Harry welcomed the fliers of the “Grand Brighton Aerial Race”, an event that he co-sponsored. Such pioneering flights, Rose Collis explains in her New Encyclopedia of Brighton (2010), resulted in Herman Volk (Magnus Volk’s son) opening a permanent sea-plane station at the Banjo Groyne in 1913, a venture that was sadly short lived.

As a boxer and boxing enthusiast, Harry gained the friendship of many famous fighters and these connections contributed, not just to the renewal of Brighton as a fashionable resort, but to Brighton’s charities; most particularly the Royal Sussex County and the Royal Alexandra Hospital for Sick Children. Once a year he staged a charity boxing tournament in The Dome and, with Edward, Prince of Wales (later Edward VIII and later still the Duke of Windsor) and the Duke of York (later King George VI) as patrons, they were a guaranteed success. In December 1926 more than £3,000 was raised in aid of hospital funds with guests entertained by world-class boxers, including Jack Dempsey.

Earlier in 1926, Harry’s reputation seems to have taken a knock because of his believed involvement, as a mounted special constable, in the Battle of Lewes Road (the very violent clash between the police, strikers and members of the public outside the tram depot). In his book Memories (1928) Harry mentions rumours of, “ugly doings at the Tram Depot”, but does not say that he was present. Whether or not he deserved to lose some of his popularity, as a result of his actions during the General Strike, his standing within the Establishment was not harmed and in July 1933 he was knighted for services to charitable causes.

Sir Harry died in August 1936. His funeral at St Peter’s in London Road was attended by hundreds of people and contemporary reports say that the streets were thronged with mourners. He was buried in Cuckfield churchyard near his country home, Apple Tree Cottage at Ansty. He was clearly a much loved man.