The British Swimming Champion & a Very Annoyed Chancellor of the Third Reich! 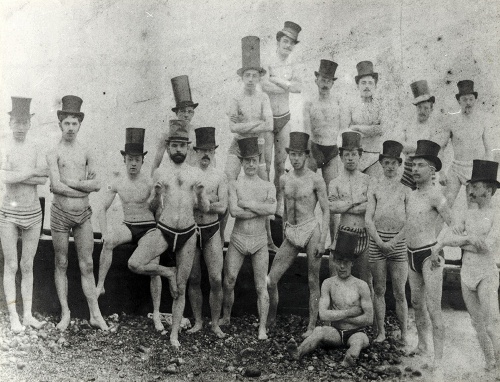 Brighton S.C. is the oldest swimming club in Brighton

At the first few modern Olympic Games, swimming events were held in open water. For the Paris 1900 Games, for instance, they took place in the River Seine. However, the rules were formalised in 1908, when the London Games staged the first Olympic swimming competition to be held in a pool. This outdoor pool was built on the infield of the athletics track at White City Stadium and the swimmers were all men; women’s events were not introduced until the Stockholm 1912 Games.

Although London 2012 cannot promise anything quite as groundbreaking or innovative as the introduction of female participants, the swimming events, to be held both indoors at the impressive Aquatics Centre and, for the marathon 10km event, outside in the Serpentine, Hyde Park, are expected to be highlights of this year’s Games.

In the 1930s, swimming was also the much talked about sport, but this was for very different reasons and the focus was on just one British backstroke swimmer, John Besford - a regular at the “S.S. Brighton” in West Street and a member of the Brighton Shiverers Swimming Club.

John “Jack” Charles Preston Besford OBE (30 January 1911 – March 1993) was born in Chorlton-cum-Hardy, studied dentistry at the University of Manchester and trained at the Victoria Baths with South Manchester Swimming Club. By 16, he was British number one for backstroke and from 1927-1936 won the British backstroke title seven times. He represented Britain in the 1928 and 1936 Olympic Games, but his most memorable achievement came in 1934 when he won the European 100-metre backstroke championship in Magdeburg, Germany. Prior to this much anticipated event, the then German Chancellor, Adolf Hitler, proclaimed that the German champion, Ernst Kuppers, would win. So convinced was he of German superiority that he commissioned a twenty-eight inch high bronze eagle, weighing over a hundredweight, to be called the Hitler Trophy, and planned to present it personally to the winner. But, like so many of Hitler’s plans, the race did not end according to his vision and Besford, not the German champion, won. Hitler was, by all accounts, so furious over the defeat that he refused to give the trophy to the British victor and stomped out of the stadium. The bronze eagle was finally presented to Besford by one of Hitler’s officials.

Back in Brighton, the trophy sat on the mantelpiece of Besford’s dental practise in Davigdor Road and he continued to swim distance freestyle in district competitions for Shiverers S.C. - a Brighton based swimming club, started in 1920 and still going strong today.

Besford was also a regular swimmer at the Swimming Stadium Brighton or the “SS Brighton” as it was known locally. The stadium opened on 29 June 1934 and was decorated internally in the style of an ocean-going liner (hence the “S.S.”) and housed the largest covered, sea-water swimming pool in the world – 165 feet long by 60 feet wide. One of the first swimmers to dive from the 10 metre diving board was Johnny Weissmuller, the Olympic World Champion and first man to swim 100m in under a minute; famous out of the pool as “Tarzan”

Unfortunately, Weissmuller’s Hollywood glamour and Besford’s championship records were not enough to secure this swimming pool’s long-term future and after initial success the “S.S. Brighton’s” popularity went into decline. This may have been due, as local historian Trevor Chepstow suggested, to the very hot summers of 1934 and 1935 when local people and visitors preferred the sea or open air baths. Just fifteen months after it opened, the management decided to turn the pool into an ice rink.

Then came the Second World War, and the Hitler Trophy was consigned to the loft while Besford served in the armed forces. Afterwards he taught dentistry at the University of Beijing and spent time in Japan before returning to his practice in Brighton. It was for “services to the British community in Tokyo” that Besford received the OBE in 1974 (London Gazette 31.12.74).

He died in retirement in Spain in 1993, at the age of 82, and his son took over the care of the trophy. For a long time John Besford Jnr, also a dentist, kept the trophy on display in his practice in Harley Street, but in 2004 agreed that it might be put on show at the Victoria Baths in Manchester. In an article entitled, “Swim Champ Who Sank Hitler’s Dream”, The Manchester Evening News reported John Jnr saying of his father, “We were all very proud of him and he was a big figure in swimming. I suppose he was what some people would call a ‘celeb’ in those days” (18 June 2004).