The Changing Face of Commemoration 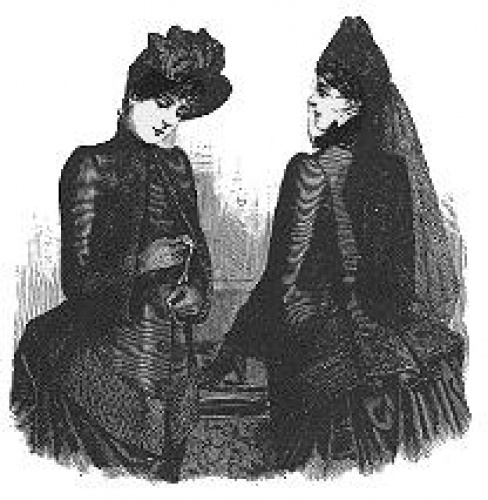 At the eleventh hour on the eleventh day of the eleventh month millions of people observe a two-minute silence to commemorate those who died in the two world wars and all subsequent conflicts. The 11th November this year will be the 94th anniversary of the signing of the Armistice, signalling the end of four years or war – the Great War, 1914-1918.

Exactly how the nation was to remember and honour the thousands who died in this Great War (or the First World War as it became known when the Second came along) presented a real challenge. On the 11th November 1920, King George V initiated the reflective silence, in Whitehall the Cenotaph was unveiled and the first remembrance service for the Unknown Warrior, interred in the West Nave of Westminster Abbey, took place.

In October of that year the Ministry of Works had instructed a committee of London undertakers, under the auspices of the British Undertakers Association, to handle the repatriation and funeral of the Unknown Warrior. This was clearly done to stop ‘bragging rights’ by one firm of undertakers over another. However, we do know that James Harold Kenyon, formerly of Brighton, was a committee member.

The firm of J H Kenyon has taken a lead in high profile, State and Royal funerals and been involved in the repatriation of British servicemen and women killed in conflicts. But Kenyon started in the undertaking business on a much smaller scale, in Brighton, in partnership with a Mr Attree: Attree and Kenyon. This arrangement did not last long and after a few years Kenyon moved up to London. Not wanting to lose face, Attree invented the mythical Kent, who is still incorporated into the business name today.

As the oldest funeral directors in Brighton and Hove, Attree and Kent have seen many changes. In the 1880s, they carried on the work of furnishing undertakers, valuers and auctioneers which meant that, in essence, they were able to deal with the funeral, subsequent house clearance and probate valuations. More than this, they were part of the great “Victorian celebration of death”, the golden age of Victorian funerals.

A bonanza of commercial exploitation maybe, but ostentatious displays of pomp and panoply found favour with all areas of society; up and down the social scale people strived to adhere to the elaborate rituals created around the commemoration of the dead. It became customary to have a lavish (expensive) funeral with professional mourners, prancing horses, flower decked funeral hearses, weeping women swathed in bombazine and to erect an ornate monument on the grave. On a day to day basis, a rigid mourning etiquette was followed. This, of course, changed according to a person’s station in life, but the right clothing always formed a big part of a Victorian’s outward display of mourning and the rules for who wore what and for how long were so complicated that advice manuals had to be written. For deepest mourning, clothes were black, symbolic of spiritual darkness. Women’s dresses were usually made of non-reflective paramatta silk or the cheaper bombazine, trimmed with crape. Crape is particularly associated with mourning because it doesn’t combine well with any other clothing – in other words you can’t jazz it up with velvet or lace. After a specified period the crape was removed – this was called “slighting the mourning”. The material colour lightened as time passed (the length of mourning depended on your relationship to the deceased) and went on to grey, mauve and white – called “half-mourning”. Men had it easier and simply wore their usual dark suits along with black gloves, hatbands and cravats. Children were not expected to wear mourning clothes, though girls sometimes wore white dresses.

All this mourning paraphernalia had to be provided quickly, mourners could not attend a funeral in the wrong clothes, and so many shops, warehouses even, sprung up to cater to this lucrative trade. In Brighton, Hannington’s provided a family and general mourning service, offering every conceivable item of clothing the family and their servants could need. And, as it was considered bad luck to keep mourning clothes, particularly crape, in the house after mourning ended, customers came back again and again. Aside from the clothes, there were many essential mourning requisites to buy, from stationary with black edges to jewellery which often took the form of a brooch or locket containing hair from the deceased and worn as a memento.

Custom demanded that things were done “properly”. Clocks in the house were stopped at the time of death, mirrors were either draped or turned to the wall and curtains were drawn. A wreath with black ribbon was hung on the front door and the body was watched over every minute until burial, creating the ritual of “waking”. The wake had two purposes, usually lasting 3-4 days, it allowed relatives time to arrive from further afield for the funeral and served as a safeguard from burying someone who was not dead, only in a coma! The fear of being buried live was very real and inspired coffin makers to design a warning system, whereby a bell on the grave was connected by a chain to the inside of the coffin and could be rung in cases of premature burial, hence the expression “saved by the bell”.

Such rigid conventions could not last and by the end of the 19th century the patterns and habits of mourning began to change. A key factor in this change was the acceptance of cremations and then, of course, the First World War which revolutionised everyone’s thinking. In 1914 to die valiantly in battle was considered an honour and it was considered inappropriate for society to mourn ‘the brave and happy deaths of these warrior soldiers’. In reality, and aside from the rhetoric of war mythology, it was simply impossible to wage war and mourn the dead in the same way. This became more apparent as the war dragged on and the casualty lists grew longer with many society leaders coming to the realisation that national morale and patriotic support for the war would be harmed if a huge percentage of the population went into full mourning. Now there is an idea – mourning clothes used to end wars. 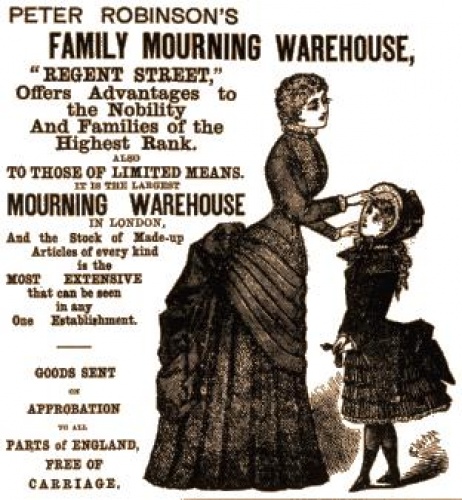 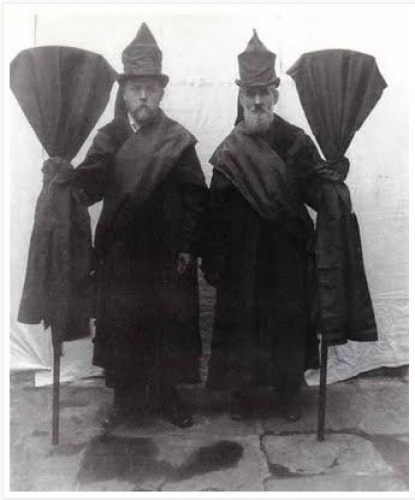 Victorian Professional Mourners c1800. From about 1600 to 1914, funeral mutes were professional mourners. Symbolic protectors of the deceased, the mute would usually stand near the door of the home or church.