The Countess of Huntingdon and her Connexion

Photograph probably taken in 1871 the year the rebuilt chapel was opened. Image reproduced with kind permission of The Regency Society and The James Gray Collection.

People new to Brighton (or just the young), may be surprised to know that there was, until relatively recently, a chapel in North Street; directly opposite the entrance to New Road where Huntingdon Towers, the language school, is today. I was certainly surprised by this discovery, even more so by the fact that it was built by a woman; a woman who felt so passionately that she was prepared to sell her jewellery to pay for it; a woman who took on roles normally attributed to men and went on to form ‘The Countess of Huntingdon’s Connexion’ – her own society of preachers and a popular religious movement.

This was clearly no ordinary woman, but I don’t think Selina Shirley Hastings, Countess of Huntingdon, was ever described as that. When she died in 1791, she left instructions that no- one should write a biography of her. She had no desire to be recognised and it was 90 years before an account of her life was written. Then influential characters stepped forward to pay tribute. Writer and politician Horace Walpole called her, “the patriarchess of the Methodists”, whilst Cardinal John Henry Newman, said, “She devoted herself, her means, her time, her thoughts to the cause of Christ. She did not spend her money on herself; she did not allow the homage paid to her rank to remain with herself.” Others called her “Elect Lady” or, “Lady Bountiful”. She was an influential leader in the 18th century revival movement and a great philanthropist, but she was not without some ‘warts and wrinkles’ – metaphorically speaking, of course.

Selina Hastings was born on the 24th August 1707, the daughter of Lord Washington Shirley and Lady Mary Shirley. She lived in a world of privilege and at an early age was introduced to the glamour of court life. It would seem though, even as a child, she was never really comfortable with what she considered the coarser pleasures of the British nobility.

In 1728 Selina married Theophilus Hastings, the ninth Earl of Huntingdon, and this marriage gave her the title Countess of Huntingdon. When the Earl died, Selina, now aged thirty-nine, was freed from the duties of a life in high society and allowed to concentrate on her charitable and religious work. She continued to hold large society gatherings, but friends and members of the aristocracy, including the Royal family, were now obliged to listen to her Chaplain, George Whitefield, preach after they had eaten!

During 1749, the year the Earl died, an ‘extraordinary panic’ spread through London. This was reportedly caused by ‘drink’ and ‘immorality’, but, I suspect, the earthquakes and financial crises experienced that Spring/Summer were more likely the cause. Whatever the reason, much to the Countess’s delight, more people started to pay attention to preachers like Whitefield. But these men were often forced to preach in the open, which was considered to be unsatisfactory and ultimately led the Countess to embark on a scheme to build a series of chapels, 64 in total, with her own appointed clergymen. As a peer, the Countess considered this to be her given right. And the first chapel to be built was in North Street, Brighton.

The Countess came to Brighton in 1755, brought here by the hope that the sea air would help her sick son. She bought a house in North Street and immediately took an interest in the wellbeing of her neighbours. She displayed a deep concern for her servants and the poor living on Brighton’s streets. Thinking that she could do more than provide food, clothing and medical aid, she sent for Whitefield. He came and gave his first sermon in Brighton in a field at the back of The White Lion, North Street. So popular were his sermons that a local religious society was formed, but without a meeting place things were not ideal. The Countess was perturbed by this, but at the time was short of funds, having spent all her available money on other charities. Her solution was to sell her jewels which raised the sum of £689 15s, just enough for a small chapel to be built next to her house.

It opened to the public in 1761 and, under the watchful eye of the Countess, the congregation grew. In fact, it continued to grow at such a rate that the chapel needed to be enlarged several times. In 1774 the original chapel was rebuilt in a much enlarged form, then in 1822 the Countess’s former residence was converted into a long gallery and a Doric entrance was made in North Street. Over-crowding and defective ventilation were cited as reasons for the building to be closed in 1869 and more commodious accommodation provided. The new chapel was built by John Wimble in the geometrical decorated Gothic style; it had an impressive frontage with spire, the interior had galleries on all sides, stain glass windows, a marble pulpit and room for 900 worshippers. The cost of all this was £7,000, paid for by the congregation and friends. Sadly, the almost impossible task of keeping this building maintained, coupled with a dwindling congregation, resulted in the chapel’s closure in September 1966 and demolition in February 1972, the spire having been taken down a few years earlier after it cracked and began to tilt.
The Countess had, of course, died long, long before this decline. She had spent her last years living frugally (allowing herself only one dress a year and the absolute minimum number of servants), content in her piety and her achievements. Today the Countess of Huntingdon’s Connexion has 21 congregations in England and some in Sierra Leone. 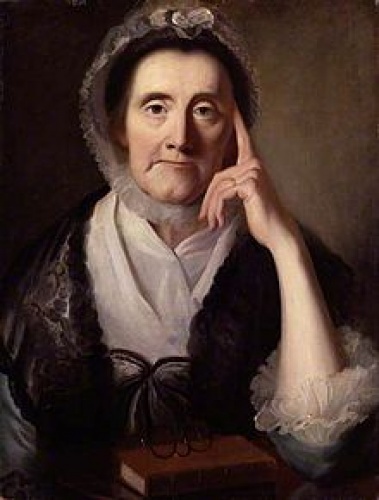 The Countess of Huntingdon (1707 – 1791) always conducted herself in a highly virtuous and religious manner, although was known to be haughty and keen on bossing men about especially the students of her college and her chaplains.