Whatever our personal preferences, the Daily Mail (founded 1896) with its middle-market readership, remains the UK’s highest-circulated daily newspaper: indeed, the early Daily Mail broadsheet was unique in that, from the outset, it aimed to attract female readers. Following the Great War (1914-1918) and years of controversial reporting, it focused on lightweight topics like fashion, the home, travel and music. When the commercial company Historic Newspapers sent me an original newspaper dated 8th March 1921, I recognised an unparalleled historical source for studying past lives and times on the eve of the 1921 Census.

Early 1921 was hectic on many fronts. The taking of the census was actually postponed from April until June because of industrial unrest, while no census occurred in Ireland due to the Irish War of Independence. Politics and world-wide developments certainly featured in the 8th March edition of the Daily Mail, with, for example, articles on the Allied occupation of Dusseldorf and other German towns to enforce prescribed military penalties, and updates on the constantly unfolding situation in revolutionary Russia.

Whilst mentioning diverse subjects of general interest, the paper’s content reflected its gender bias towards women. Much of the front page was dedicated to illustrated fashion advertisements, with more dominating the inside spreads and further fashion, textiles and haberdashery small ads filling column after column. Most items advertised for sale were geared towards young to middle-aged women: recommended purchases for themselves and their children, while, by contrast, consumer goods for male readers were scarce.

The Age of the Department Store

Numerous dress-related advertisements in just this one issue of the Daily Mail suggest how successful working-class and more affluent middle-class families might acquire clothes and personal items. Although some department stores had struggled during WW1, others flourished in the 1920s and the paper promoted merchandise from all the well-known London stores of the day, including Barkers, Pontings and Derry & Toms in Kensington; Harvey Nichols of Knightsbridge; Selfridges and D H Evans of Oxford Street; Swan & Edgar, Piccadilly; Robinson & Cleaver, Regent Street; Gorringes of Buckingham Palace Road; Whiteleys of Queensway; and Arding & Hobbs, Clapham. Originally founded during the 1800s and early-1900s, these were all household names: some cultivated a high-end, prestigious image, others aiming for the middle-market, but all competitive and promising ‘Special Values’, ‘Exceptional Bargains’ ‘Springtime Deals’, ‘Half-Price’, ‘Inexpensive’ and ‘Economical’ goods. Nonetheless, discerning customers also sought dependable quality, each store stressing the ‘excellence’, ‘comfort’, ‘durability’, and ‘reliability’ of their goods.

Sadly, many of the great retail establishments patronised a century ago for hats, coats, shoes, gloves, suits, skirts, frocks, blouses and children’s wear did not last, or limped on under new ownership, closing their doors in recent times. Other shops did survive, albeit much-altered, and it is also perhaps surprising to note already familiar high street names like Dorothy Perkins – a ‘Hosiery and Underwear Specialist’ in 1921. Customers could personally visit their London branches or send up for items like corsets, by quoting the model number. Indeed, distance shopping via mail order was a common way of making purchases, many retailers offering free illustrated catalogues. Additionally, some manufacturers advertised directly in the newspaper, eliminating the middleman and inviting direct orders, especially northern textile and small-wares producers like Manchester-based Oak Tree Hosiery and Haslam’s fabrics.

Not everyone could easily go clothes shopping in person, especially mothers with large or very young families, and home dressmaking was widespread. Diverse advertisements in the newspaper reveal myriad different fabrics available by the piece or length, from functional serge, flannel, gabardine and other woollen cloths, to more luxurious chiffon, silk and lace. We also glimpse some of the new yarns being developed such as jumper ‘silkette’ for knitting, from Hawes Bros of Clapham Junction. The Daily Mail also ran its own Pattern Department, and in March 1921 advertised a ‘Picturesque Dressing-Gown’, the paper pattern and instructions available post-free upon request.

When envisaging the 1920s, we often picture sleek, minimalist styles, daring bobbed haircuts and ‘flapper’ fashions but such modern, sometimes extreme modes developed mainly in the later 1920s. In 1921 the mood was conservative and feminine, at least as represented in the visual and written content of the Daily Mail. True, the fashionable look was becoming simpler, less cluttered, but frocks and suits remained modest and concealing, featuring elbow-length or long sleeves, loose ‘barrel-shaped’ lines and low calf-length hems. Hair was often kept long, the locks pinned back. Indeed, the importance of preserving long luxuriant hair was reflected in conventional advertisements, for instance ‘Danderine Beauty Tonic’ for lustrous and plentiful locks.

The newspaper had all bases covered for its female readers in 1921. Which of our forebears were alive then and how far might the content relate to their lives? Both of my grandmothers were raising three young children in London at precisely that time: did they shop in Whiteleys or Gorringes, use mail-order catalogues or make clothes at home? Food for thought… 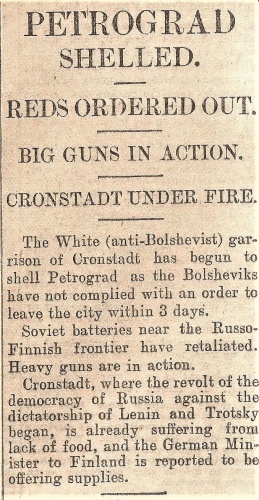 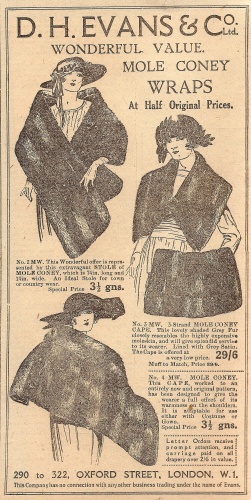 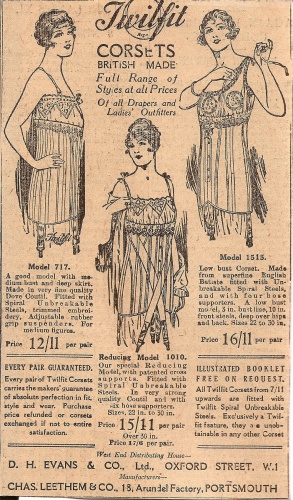 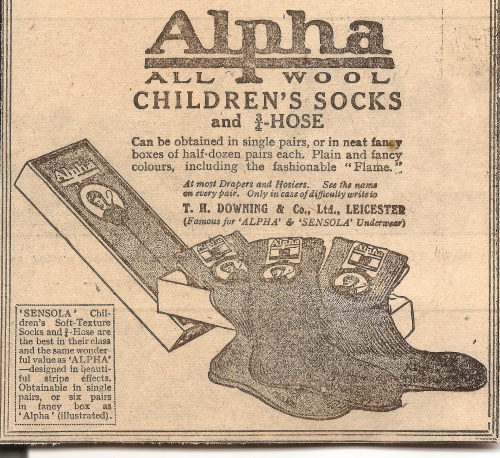 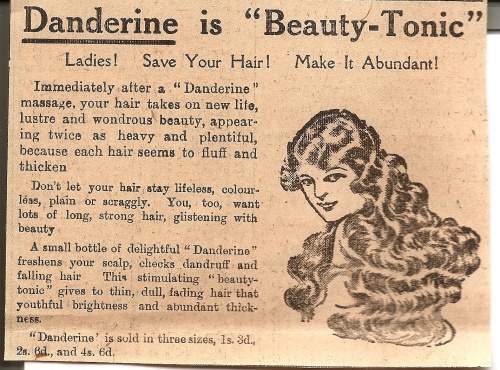