Dieting through the Ages 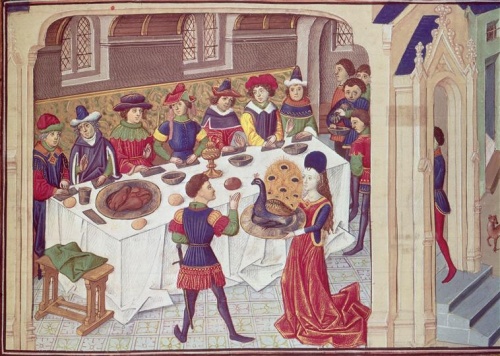 January is the month for New Year’s Resolutions and top of many lists will be getting trim and fit after the inevitable extravagances of Christmas. Dieting and preoccupation with body image may have reached extremes in our modern world, yet such concerns are not new, for history reveals a catalogue of attempts at weight management, from alcohol, pills, cigarettes and soap to healthy eating programmes.

The ancient Greek physician Hippocrates (c.460-c.375 BC), the ‘Father of Medicine’, was an early advocate of a balanced diet and exercise for maintaining a healthy lifestyle. At the same time, Olympian athletes were urged to follow specific guidelines for the strength and agility needed for victory: initially dried figs, bread and fresh cheese were recommended, but Pythagoras (possibly the philosopher, or a gymnastics teacher of the same name) made red meat a priority; subsequent trainers reiterated the importance of meat, adding “you have to….keep away from desserts; you must not drink cold water nor can you have a drink of wine whenever you want”.

By the Middle Ages, royalty and the nobility enjoyed a luxurious, high-status diet, including copious quantities of wine. William the Conqueror, King of England 1066-1087, retained good health until old age, when he grew dangerously corpulent: adopting a liquid diet comprising mainly alcohol, he lost sufficient weight to get back in the saddle, but died soon afterwards from a riding accident. William’s successor, Henry I, King of England 1068-1135, famously expired due to ‘a surfeit of lampreys’: lampreys were eel-like fish that Henry ate to excess even in his twilight years, against medical advice that they were too heavy for his feeble constitution. Richard III was the last English king to die on the battlefield in 1485, aged 32, and studies of his body (discovered in 2012) revealed a diet of game such as swan, crane and heron, freshwater fish like pike and large amounts of wine. Medieval and Renaissance kings and princes enjoyed seemingly unlimited wine, liquid-based diets sometimes being recommended to counter obesity at this time. Italian nobleman Luigi Cornaro, author of The Art of Living Long (1558), who reputedly lived until about 100, put his longevity down to a daily intake of 12oz food and 14oz wine – an approach nicknamed The Immortality Diet.

Since the 1600s, attention to diet formed part of broader medical regimes. George Cheyne (1671-1743), an influential Scottish medical practitioner who treated sedentary urban, middle- and upper-class male patients in fashionable London and Bath favoured a spiritual, ethical approach. He advocated a diet based on milk and vegetables, plus regular sleep, exercise and temperance, to keep men relaxed and happy; conversely, erratic eating habits and heavy drinking sessions ‘inflamed the passions’, prompting riotous and dissolute behaviour. Such rational concepts, reflecting Enlightenment philosophy, were overturned somewhat in the early-1800s when emotion-conscious Romantic writers, artists and their followers favoured a pale, thin and languid fashionable ideal. To this end, the poet, politician and traveller Lord Byron (1788-1824) spent much of his tortured youth trialling bizarre diets, including hard biscuits with soda water and potatoes drenched in vinegar.

During the Victorian era, a low carbohydrate diet became the most widely accepted method of losing excess weight. The first serious work on dieting is recognised as the booklet entitled Letter on Corpulence, Addressed to the Public published by eminent undertaker, William Banting in 1864, which began: ‘Of all the parasites that affect humanity I do not know of, nor can I imagine, any more distressing than that of Obesity.’ Banting (c.1796-1878), once obese and having tried in vain various spas, diets and exercise plans, now espoused a weight loss programme based on limiting consumption of carbohydrates, especially those high in starch and sugar. Making his dietary changes at the suggestion of London physician Dr William Harvey, Banting successfully replaced excessive intakes of beer, bread, sugar, potatoes, milk and butter with mainly meat, fish, vegetables, fruit and dry wine. The immense and enduring popularity of his pamphlet and diet plan ensured that the verb ‘banting’ (as in ‘Are you banting?’) remained a colloquialism for dieting well into the 20th century.

In the early-1900s, overweight American businessman Horace Fletcher slimmed down and introduced a new phenomenon with his ‘Chewing Diet’, based on the chewing of each mouthful of food at least 32 times, or until it attained liquid form. Fletcher, dubbed ‘The Great Masticator’, believed his method could help with weight loss and avoidance of disease and it made him a fortune. Rumours of another technique in the early-1900s concerned the ‘Tapeworm Diet’ by which, in theory, the dieter swallowed a tapeworm that would live in the stomach as a parasite, consuming a proportion of his/her food. While vintage advertisements survive, there is little evidence of the use of tapeworms, although urban legend has it that the opera singer Maria Callas used this repellent method in the 1950s to achieve substantial weight loss.

During the 1920s the vogue was for a slender, boyish ‘garcon’ look, but some women struggled to attain this image, using questionable medicines and pills that claimed to banish superfluous flesh or employed constricting corsetry and other underpinnings to flatten their natural curves. It was probably no coincidence that smoking was becoming highly fashionable, with – unbelievable today – many cigarette companies publicising the health benefits of their products. In 1929 one advert proclaimed: ‘Light a Lucky and you’ll never miss sweets that make you fat.’ A cult of health and fitness developed during the 1930s, as the great outdoors beckoned with lashings of fresh air, sunshine and physical exercise. Extreme fads including periods of starvation were fashionable, while the grapefruit diet first made its appearance, an eating programme advocating protein- and fat-rich foods alongside the grapefruits that would miraculously burn fat, producing the perfect streamlined body.

Some diets devised years ago are familiar today, yet the weight control activities of even relatively recent celebrities can seem decidedly strange. Reputedly artist Andy Warhol ordered foods that he disliked when in restaurants, asking for a doggy-bag upon leaving and promptly giving his meal away to a homeless person. Elvis Presley was said to be an advocate of the ‘Sleeping Beauty Diet’, that is, gorging on his favourite burgers then sedating himself with sleeping pills for days, to inhibit further eating. Like many of the methods outlined here, it goes without saying: Don’t Try This At Home….