Enthroned in the Hearts of their People 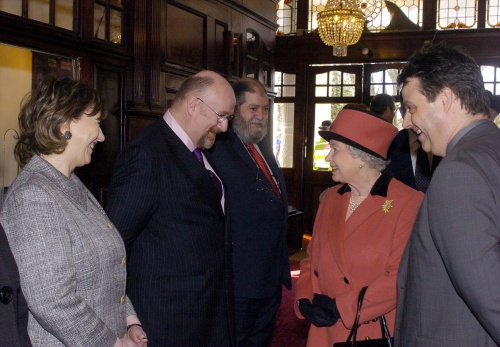 Reproduction courtesy of Theatre Royal, Brighton. Visit by Her Majesty the Queen to mark the Theatre’s 200th Birthday. The Queen renamed a Box in the Theatre; The Queen Elizabeth II Box.

Queen Elizabeth II has now become the second monarch in British history to celebrate sixty years on the throne. To mark this fairly momentous achievement, individuals and communities up and down the country will be marking the Diamond Jubilee in a host of different ways and Brighton will be there joining in the fun and games, with plans afoot for a right royal knees up!

There have been many royal occasions in the history of Brighton. In fact, you could say the town has had a long love affair with royalty. We all know of the Prince Regent’s, later to become King George IV, passion for the town, but this larger than life character has slightly overshadowed what came next. Certainly, his brother, King William IV, who succeeded him in 1830, was popular with Brightonians and, despite his plainer tastes, he liked to stay in the Pavilion. One of his first acts here was to see George’s unofficial wife, Mrs Fitzherbert, and offer her the title of ‘Duchess’ which, incidentally, she refused. The ‘Sailor King’ liked Brighton, he enjoyed walking along the Chain Pier and he liked the other promenaders he encountered there. Unfortunately, when his young niece, Victoria, came to the throne Brighton’s relationship with the monarchy did suffer a small hiccup.

Queen Victoria made her first visit to Brighton on 4 October 1837. Unlike her two uncles, Victoria was not amused by the Royal Pavilion, in particular the lack of privacy it afforded her. She complained that ‘the people are very indiscreet and troublesome here really, which makes the place quite like a prison’. In 1850, she sold George IV’s seaside plaything to Brighton Corporation and, as it was thought the building would be torn down, she ordered that it be stripped of all its fittings and furnishings for use in other royal homes.

Victoria may have rejected Brighton as her country retreat but her son, Edward VII, had a different view. He first came as a baby in 1842; while his parents did not return to the town after 1845, Edward remained a lifelong, regular visitor and Brighton once again found itself a favoured resort of the monarch. After the sale of the Pavilion, there was no royal residence so Edward stayed with the Sassoon family at 8 King’s Gardens, Hove, or with his daughter, the Duchess of Fife, at her house on Lewes Crescent. He liked to stroll in the crescent’s private gardens, but when these informal walks started to attract an inquisitive crowd Brighton’s Chief Constable had to take action – he arranged that when the curious arrived at the seats where they gathered to wait for the King’s appearance they found them to have a fresh, wet coat of bright green paint every morning!

George V’s reign stands out because it included the Great War. George and Queen Mary visited the Royal Pavilion when the building was being used as an Indian Hospital. And Queen Mary visited again to see the Queen Mary Workshops specially built as her own Royal gift for the training of disabled servicemen. After the Armistice, she returned many times; she clearly had a soft spot for the town, especially the shops in the Laines and North Street. But no visitor since the Prince Regent excited such local interest as Edward, Prince of Wales, did in February 1921. The romantic-looking prince, described by contemporaries as the most popular young man in the Kingdom, who was later to be King and finally Duke of Windsor, drove through Brighton to unveil the Chattri on the Downs at Patcham as an Indian war memorial. He came again in March 1927 and, as pointed out by the Brighton and Hove Herald, had a full day of engagements in the rain, but “by his Spartan fortitude the Prince showed himself every inch the material of which Kings are made.”

Another notable royal visit was that of the Duke and Duchess of York – not Prince William and Kate, but his great grandparents, later King George VI and Queen Elizabeth – in 1928. In the summer of that year, Brighton celebrated the extension of its borough boundaries to take in Rottingdean, Patcham and the Dyke area. To mark the creation of Greater Brighton, two pylons were erected either side of the London Road at Patcham and the Duchess laid the foundation stone of the western pylon with a golden trowel. The Royal couple took lunch at the Dome and finished their visit by opening a new wing of the Royal Alexandra Hospital for Children where they were presented with a doll for for Princess Elizabeth, our present Queen.

Later Princess Elizabeth came to the Royal Alex herself; she took tea at Preston Manor; and attended concerts at the Dome. In 1951 she inspected the beginning of the restoration of the King’s Private Apartments in the Royal Pavilion and, from enquiries she made on that day about the lamentable lack of furnishings, it is thought that some of the original furniture removed by Queen Victoria started to find its way home. Since her accession to the throne in 1952, Queen Elizabeth has visited Brighton many times and people have their own favourite memories of these occasions. My own is when the Theatre Royal celebrated its 200th anniversary (2007) and the Queen came and renamed a box after herself and my son was a member of the youth orchestra that played for her. Joan Evans remembers a day in 1979 when she was part of a long line of people standing beside the main coast road waiting for the Queen to go past, on her way to open the Marina. “It was a typical, grey day and the waiting was tedious. I remember feeling a bit silly, waiting to watch a car - surely a young trendsetter like me had better things to do - but as it actually happened, when she passed, I saw the most beautiful woman I have ever seen. The memory of those few seconds is pin sharp. She kind of shone. It was odd, unforgettable. There was something else, apart from her appearance - I think it was kindess.”

If you have any memories of meeting or seeing the Queen in Brighton please do share them with us. Thank you.