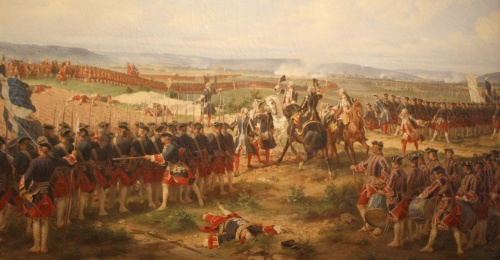 The Battle of Fontenoy, 1745 at which Phoebe Hessel was wounded, painted by Felix Philippoteaux, 1873 [Wikimedia Commons]

As International Women’s Day comes around (Thursday 8th March), we celebrate some of the extraordinary women who have contributed to the colourful history of our city. Cross-dressing soldier and centenarian

In the past, a few women entered the armed forces disguised as men and one was Phoebe Hessel (née Smith), 1713-1821. The details of Phoebe’s story are imprecise, since different sources conflict, but reportedly she enlisted in the British Army, accompanying her lover, Samuel Golding. They both served in the West Indies, Gibraltar and Europe and were wounded at the Battle of Fontenoy in 1745. At length she revealed her position to an officer’s wife and she and Golding were discharged and married. Later, after Golding died, Phoebe settled in Brighton, where she married a Mr Hessel. Following his death, when she was aged about 80 she received three guineas from the parish, purchased a donkey and earned a living selling fish and vegetables in and around Brighton. Phoebe became a well-known local figure and was later to be seen selling gingerbread and oranges on the corner of Marine Parade and Old Steine. A favourite of the Prince Regent, she attended his coronation celebrations prior to her death in December 1821, aged 108. She is buried in St Nicholas’s churchyard, her name displayed on Brighton & Hove bus: 412.
Brighton ‘dipper’

When sea bathing first became fashionable at Georgian resorts, visitors were attended by hefty bathing women or ‘dippers.’ Unchallenged ‘queen’ of the Brighton dippers, Martha Gunn (1726-1815), came from an established fishing family, many of whom worked as dippers from the 1750s. This was a paid job and Martha’s day began at around 6am as sshe positioned herself near the bathing machines ranged along the shore. A horse dragged the wheeled conveyance into the water, then dippers helped their customers to exit modestly, lifting them into the water and assisting with their therapeutic submersions, then returning them to the beach. Martha performed this service over and again, reputedly working in all weathers and spending many hours daily standing in the sea. Martha, who lived at 36 East Street, Brighton became well-known both locally and nationally, a strong woman whose solid image appeared in popular engravings, including one in which she was pictured repelling the invading French with a broom. She reputedly dipped the Prince of Wales, who enjoyed bathing at Brighton from the 1780s and became a royal favourite, enjoying free access to the Royal Pavilion kitchen and being painted for the Prince by John Russell. Working into old age, Martha died at 88, also buried in St Nicholas’s churchyard. She is featured on Brighton & Hove bus: 410. Not-so-secret wife

Maria Anne Fitzherbert (1756-1837), was married to her second husband when she claimed she first met George (later King George IV) in Chiswick (later King George IV), in 1780. She was a wealthy widow by the time of their second meeting in 1784; the Prince became infatuated with her, but being a devout Catholic she declined to become his mistress. In December 1785 they married clandestinely, although technically their marriage was illegal for the heir to the throne was not permitted to marry a Catholic – nor had he obtained the King’s permission. Nevertheless the couple honeymooned and were often seen out together, although they kept separate houses. Once their ‘marriage’ became well-known, fashionable London society shunned Mrs Fitzherbert. She moved to Brighton, renting a villa near to the Marine Pavilion, the Prince later buying her a property nearby, Steine House (now the YMCA building). Their relationship continued to be a stormy one due to the Prince’s many infidelities and official marriage to Caroline of Brunswick in 1795. They were reconciled in 1799 but finally parted in 1811, afterwards rarely seeing one another. Mrs Fitzherbert remained in Brighton on an annuity and when George IV died in 1830 he was wearing a miniature of her around his neck. The city still remembers her on Brighton & Hove bus: 408.
‘The Brighton Poisoner’ or ‘The Chocolate Cream Killer’

Christiana Edmunds, 1828-1907 was born in Margate, but after her father’s death she and her mother took lodgings at 16 Gloucester Place, Brighton. There in the late-1860s she befriended the local doctor, Charles Beard, a family man. The true nature of their relationship remains unclear, but in September 1870 she poisoned Dr Beard’s wife with a gift of strychnine-laced chocolates. Mrs Beard became ill and her husband grew suspicious. Edmunds then launched a bizarre plan to divert attention away from herself and toward the confectioner, J G Maynard’s of West Street. Buying strychnine from a chemist in Queen’s Road, ostensibly to dispose of some cats, she paid young boys to buy chocolates from Maynard’s, into which she carefully injected the poison, then returned them to the shop. Unsuspecting, Maynard sold these to customers and subsequently several people became ill, one 4-year-old boy on holiday, Sydney Albert Barker, dying in June 1871. Following an inquest and verdict of accidental death Christiana then stepped up her campaign and began sending anonymous poisoned food parcels to prominent Brighton residents, including Mrs Beard, who became very ill. The press became interested, Dr Beard informed the police of his suspicions and Edmunds was charged with murder and attempted murder. Her mother testified to mental illness in the family, while Dr Beard claimed that he had been the object of an obsessive infatuation. Edmunds was sentenced to death, but this was commuted to life imprisonment and she spent the rest of her days in Broadmoor Criminal Lunatic Asylum.

Clementina Black, 1853/4-1922, was born in Brighton, her father being a solicitor and the town clerk and coroner. After her mother’s death in 1875, she cared for her five (some sources state seven) siblings and invalid father in their home at 58 Ship Street, Brighton, while also working as a local teacher. In her spare time she began to write and published A Sussex Idyll in 1877. Following her father’s death, in the 1880s she and her sisters moved to Fitzroy Square in London, where she began to study social problems and became politicised. Befriending Eleanor Marx, daughter of Karl Marx, she also met other radicals, free-thinkers and socialists, becoming active in the Fabian Society. In 1886, Black became honorary secretary of the Women’s Trade Union League, helping to unionise women in London’s East End. Later she helped to form the Women’s Trade Union Association, which subsequently became the Women’s Industrial Council (WIC). Being especially concerned about the appalling working conditions of home workers and women in the sweated trades, she was among the organizers of the now-famous Bryant and May match girls’ strike in 1888. In 1895 she became editor of Women’s Industrial News, the journal of the WIC, which encouraged middle-class women to report on the working conditions of poorer women. Determined and well-liked, in 1896 Black also began to campaign for a legal minimum wage, to try to alleviate poverty for the working masses. She knew that women’s situation would not improve dramatically until they had the vote and by the early 1900s she was active in the burgeoning women’s suffrage campaign. She continued to write and lecture even when her eyesight failed, one of her most successful novels being The Agitator (1894), highly praised by Eleanor Marx. She is sometimes said to have died in Brighton but other sources state Surrey or Middlesex, her burial place East Sheen Cemetery. She is remembered today as a bold and popular social reformer and has a Brighton Bus named after her: 658.