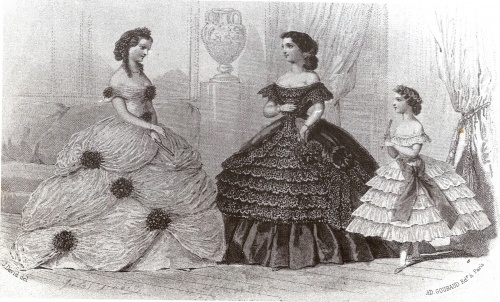 As Christmas and the New Year approach, the fashion magazines and shops are bursting with festive occasion wear, those must-have sequinned tops, statement dresses and stylish suits for the party season. Christmas celebrations began in earnest in the early Victorian era and here we look at how formal dress for dinners, dances and other evening functions evolved over the following century.
Historically, it was considered important to dress correctly for each different occasion, the etiquette of dress and social behaviour becoming more significant and complex in Victorian Britain. Numerous publications set down ‘regulations’ concerning conduct and appearance, guidelines aimed at maintaining traditional standards and class hierarchy in a rapidly-shifting society. For balls and formal evening receptions, young unmarried females were advised to wear white gowns of fine gauzy material such as muslin, organdie or tarlatan – delicate fabrics suggestive of youth, purity and innocence. Conversely, extravagant tulles and handsome silks and satins in rich colours, embellished with lace, were thought more suitable for married women. These sartorial distinctions signalled whether or not a young lady was ‘available’ in the marriage market – of great importance at a time when introductions to potential suitors were often made and courtships conducted at evening social events.

The style of Victorian evening gowns broadly followed prevailing fashion, hence ladies’ skirts grew fuller during the 1840s and 1850s, the crinoline frame, introduced in 1856, supporting the vast, circular skirts of the late-1850s and 1860s. In the early 1870s and again during the 1880s a fashionable bustle (or tournure) formed a projection at the back of the skirt, the back drapery cascading into a sweeping train. Evening ensembles exposed more flesh than did concealing day wear, although the low-necked dresses worn for relaxed dinner parties and intimate gatherings of friends were more modest than the full-dress toilettes required for balls and formal dances, public dinners and grand assemblies. Ensembles for such occasions featured a gown with plunging décolletage and short sleeves, a sumptuous evening cape or cloak, jewellery, hair ornaments, white gloves and a fan. Jewellery should also express age and marital status: it was recommended that unattached girls either wear no jewellery at all, or choose simple, chaste pearls, whereas married women might indulge in gold, diamonds and glittering gemstones. As late as 1899, the Illustrated London News asserted: ‘All that a girl wears should be gay and light-looking, the opposite to the touch of stateliness and the settled air that become her young matron sister.’

Edwardian evening wear followed similar conventions. The wealthy still had their costumes made by the haute couture fashion houses of Paris or London, the middle-classes purchasing the latest French designs in up-market department stores or having personalised versions made by their favourite ‘little dressmaker’. The sinuous art nouveau aesthetic of the early 1900s favoured a curvaceous female silhouette, this expressed most strikingly in lavish evening gowns with narrow shoulder straps, hour-glass bodices and clinging skirts that flared towards a fish-tail hemline. Fashionable materials included silk, satin, chiffon, muslin and net, ornamented profusely with lace, embroidery and sequins. This ultra-feminine ensemble was completed with long fitted gloves, a fan, a pearl or diamond choker necklace, and, for the most formal events, a tiara – the evening accessory of the Edwardian era.

Menswear can seem insignificant besides the gorgeous apparel paraded by women at dinner parties, dances and balls, yet gentlemen’s evening dress was also considered important. Until the 1850s coloured coats might be worn, but by the mid-19th century a black dress or tail coat and close-fitting black dress trousers were customary for full dress or evening wear. The coat was usually tailored from fine milled cloth and finished with silk or velvet collar and facings, its long lapels revealing the waistcoat and starched white dress shirt beneath. The waistcoat was black or white, a white waistcoat and white tie considered correct for full evening dress worn to the most formal functions. Accessorised with a silk opera (top) hat, white gloves, cane and evening cloak or coat, this ‘timeless’ style continued into the 20th century, its enduring popularity owing much to the evening dress worn on stage and screen, especially in musicals featuring Fred Astaire. From the 1880s an alternative, more relaxed evening suit also evolved, featuring the short evening lounge or dinner jacket (called the Tuxedo in America), tailored in cloth or velvet. By the 1920s a dinner jacket and black bow tie were popular for informal events such as private dinner parties, the theatre and concerts.

Jayne Shrimpton is a professional dress historian and portrait (artworks and photographs) specialist with a Master degree in the History of Dress from the Courtauld Institute of Art (University of London) and a previous career at the National Portrait Gallery in London. She is a freelance consultant, writer and lecturer - the author of several family photographs and fashion history books, numerous magazine articles and a regular lecturer at history-related events in Sussex and throughout the south of England. Her website is: www.jayneshrimpton.co.uk