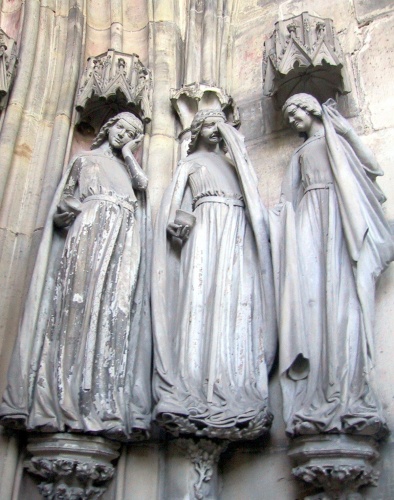 For centuries, the foibles of fashion have been mocked and condemned. Early Christian churchmen preaching humility denounced overt sartorial display as sinful and ungodly. When tailoring advanced in the late-11th and 12th centuries, provocative tight-fitting garments, long pointed shoes, excessive jewellery, and long hair in men were proclaimed immoral, temptations of the Devil. These modes were also considered unmanly: in Historia Novorum in Anglia, historian and ecclesiastic Eadmer related how by 1100 ‘…it was the fashion for nearly all the young men of the Court to grow their hair long like girls; then with locks well-combed, glancing about them and winking in ungodly fashion, they would daily walk about with delicate steps and mincing gait.’ In 1135, monk and chronicler Orderic Vitalis preferred to discuss ‘holiness and the miracles performed by saints than…the trifles of fools and frivolous extravagances.’ Throughout the Middle Ages, elite fashions and manners continued to be equated with human folly, vanity and pride. From the 1400s the Renaissance ushered in more worldly attitudes, and greater luxury prompted some startling dress trends, such as flamboyant slashed doublets and the bizarre tattered, multi-coloured clothes popularised by Landsknecht mercenary soldiers. But those who abandoned plain honest dress, unthinkingly adopting frivolous new fashions, were pronounced foolish and ‘wanton’ by Dr Alexander Barclay in The Ship of Fools (1509). Castiglione’s Book of the Courtier, published 1528, agreed that that too much glitter and colour made a man look like a jester; he would not be taken seriously. Yet dress grew increasingly extravagant, as reflected in the vast ruffs and excessively wide padded trunk hose adopted during the later 1500s. Queen Elizabeth I used magistrates to enforce Acts of Apparel, one man being arrested in 1565 wearing ‘a very monsterous and outraygeous great payre of hose’, that were then displayed ‘in some open place…. where they maye aptly be seen and consideryd of the people as an example of extreme folye.’ Public ridicule was considered a fitting punishment.

In Stuart England, plays, poems and facetious etiquette books derided the callow young gallants or ‘gulls’ arriving in London who wasted their money on flashy clothes, and also ridiculed fashion-obsessed ladies. In Lingua, or the Combat of the Tongue (1607) Thomas Tomkis wrote: ‘…there is such doing with their looking-glasses, pinning, unpinning, setting, unsetting, formings and conformings…such stir with sticks and combs,…busks, bodies, scarfs, necklaces…borders…fans.., ruffs, cuffs, puffs, muffs…and such a calling for fardingales, kirtles, busk points, shoe ties, etc. that seven peddlers shops…will scarce furnish her: A ship is sooner rigged by far than a gentlewoman made ready’. During the Commonwealth (1649-60) Puritans denounced some fashions, but any serious attempts to limit finery were unsuccessful and afterwards the Restoration ‘fop’ with his ornate snuff box, long curls, effeminate face patches, lace sleeve ruffles and vast fur muff became the butt of humour.

Throughout the 1700s wages increased and the consumer market widened, fuelling widespread accusations that the working classes were increasingly dressing above their station. Early Georgian taste favoured exuberance and vast hooped skirts inspired ‘A.W.’ to write The Enormous Abomination of the Hoop-Petticoat, 1745, complaining that ‘…women are by this prodigious Garment become a perfect publick Nuisance’, criticising ‘…the vast foolish Expence of so much Silk and other costly Materials.’ With women now leading a more public life, their appearance attracted growing censure in print and in graphic imagery during the heyday of the social satire. Caricatures mercilessly mocked the battery of artificial beauty aids used by ageing ladies seeking to disguise the ravages of time, and exaggerated the tall, ‘macaroni’ hairstyles of the 1770s, described by Bluestocking Mrs Delany as ‘waving plumes, preposterous Babylonian heads towering to the sky…more suited to the stage or a masquerade than for either civil or sober societies.’ Between the 1790s and 1810s dress became simpler, more natural in style, but the fashion for ladies’ lightweight, clinging neo-classical white gowns worn with little underwear prompted accusations of immorality and was blamed for causing pneumonia. Today we also recognise the enormous economic and human cost of producing the diaphanous white muslin, from the cultivation of raw cotton on slave plantations, through the long hours spent spinning and weaving the cloth in dangerous mills, to the teams of servants needed to maintain these luxury items. Another unsettling aspect of fashion that peaked in the late-18th and early-19th centuries was felt hat manufacture, for the process of transforming raw animal fur into pliable felt for fashionable men’s headwear used uncontrolled quantities of toxic chemicals: in particular, noxious mercury vapours poisoned workers, causing chronic mental disorders, excruciating physical deformities, and in some cases death.

By the industrial age, with the expansion of mechanised factories and mass-production of diverse, affordable goods, fashion was accelerating and reaching a wider population. But rapid, unchecked ‘progress’ came at a price, for technological advances now placed the workforce at growing risk, labouring as many did with harmful materials, unprotected, in lethal conditions. Scientific research led to the development of bright, intense ‘aniline’ (chemical) dyes, used for vibrant new dress fabrics. However these lurid hues were not universally admired: in the early 1860s visiting Frenchman, Hippolyte Taine, criticised the ‘outrageously crude’ colours and ‘want of taste’ among British women, his Notes on England itemising ‘violet dresses, of a really ferocious violet; purple or poppy-red silks, grass-green dresses decorated with flowers, azure blue scarves….’ More seriously, several fashionable 19th-century colours threatened the health, even the lives of makers and wearers of garments, especially vivid shades of green that contained perilously high levels of arsenic.

The Victorian era produced a succession of extreme female styles. As artificial under-structures such as the crinoline and bustle contorted the body, these inspired multiple cartoons in the middle-class satirical magazine Punch. The ungainly cage crinoline frame, worn throughout society, seemed particularly risible, causing embarrassment and horrific accidents. Yet the 20th century also spawned foolish fashions, from the trailing flapper scarf that killed dancer Isadora Duncan in 1927 to the 1970s platform shoes that caused injuries and driving accidents. Today many popular lipstick brands still contain harmful lead and our desire for cheap mass-produced clothes costs the lives of factory and sweatshop workers. The love of novelty is a powerful force and the global fashion industry generates vast profits. Few would argue with the attraction of beautiful clothing, but until we take more responsibility and push for further social, economic and environmental change, fashion will always have the last laugh. www.jayneshrimpton.co.uk 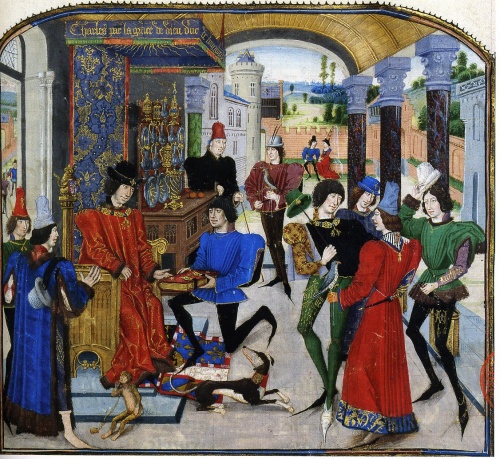 Illustration from A History of Alexander the Great by Loyset Liedet, c.1470 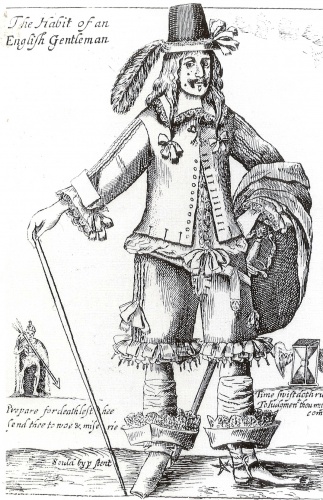 ‘The Habit of an English Gentleman’, late 1640s, mocks the long hair, patched complexion and be-ribboned doublet and petticoat breeches of a fashionable ‘gallant’ 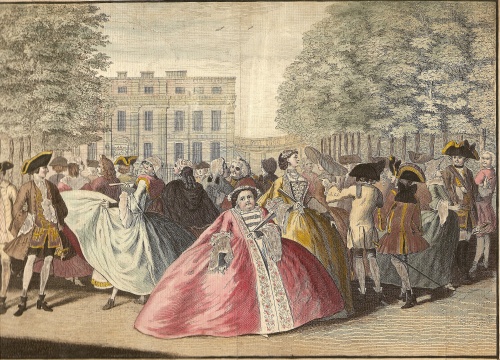 Vast hooped Georgian skirts and their wearers are ridiculed in ‘Taste à La Mode’, an engraving after L P Boitard, 1745 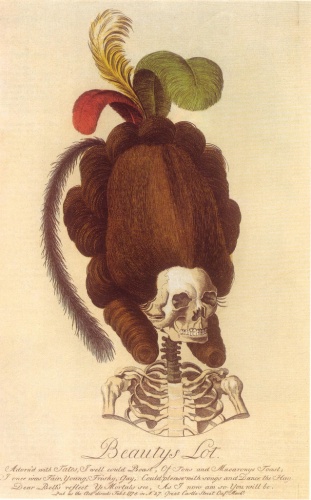 This caricature, 1778, pokes fun at artificial macaroni hairstyles and is also a gruesome reminder of the ephemeral nature of fashion, in the face of death 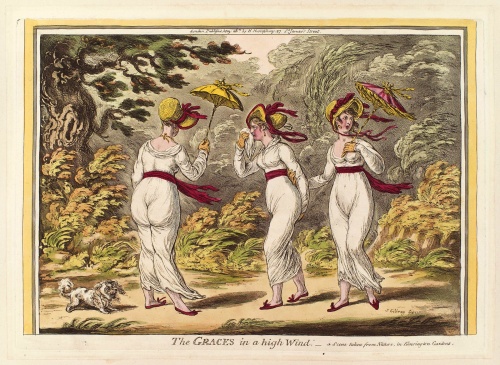 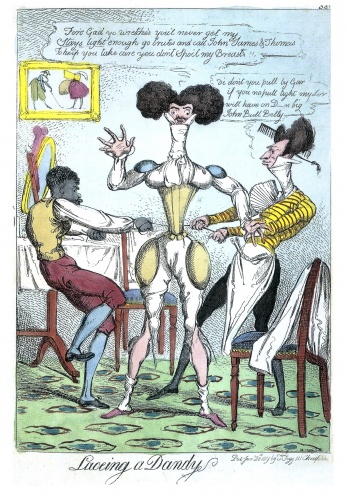 A Regency ‘dandy’, obsessed with his appearance, employs tight corsetry and extra padding to create the desired fashionable look in this satire, 1819 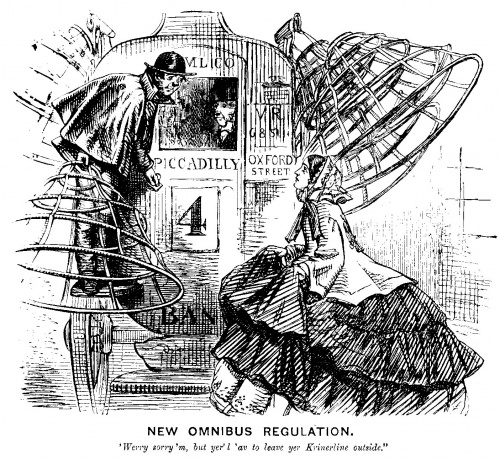 Punch magazine, which had a field day with ladies’ fashions, mocked the vast cage crinoline that shaped mid-century dress, in this illustration from October 1858 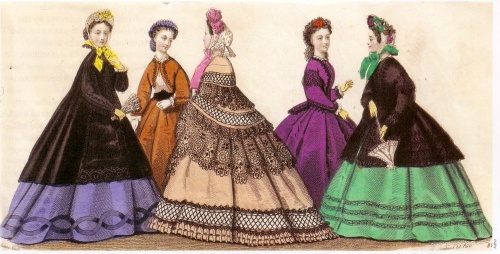 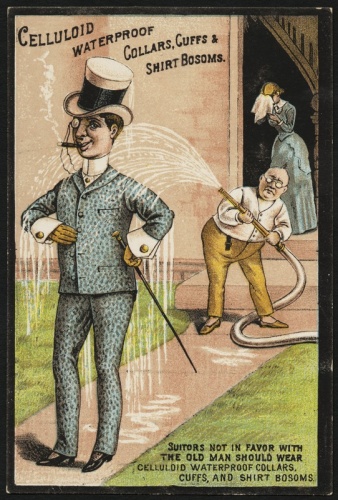 Celluloid, a highly flammable early plastic developed in the late-1800s, was widely used for men’s shirt cuffs and collars, as seen in this advertisement, c.1890 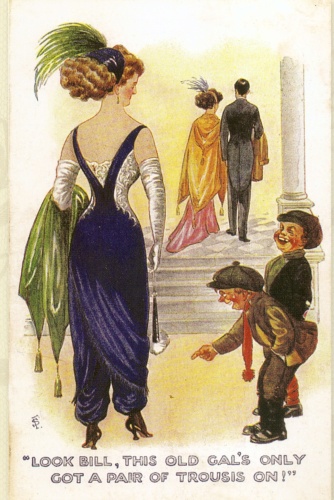 Eccentricities in women’s dress still inspired humour in the 20th century, like the daring harem pants that were a brief evening fashion, pictured on this postcard, c.1911