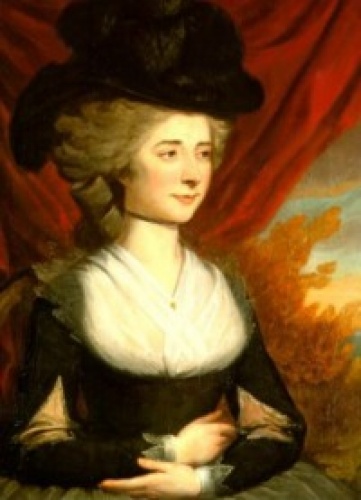 Frances Burney (1782) by Edward Francisco Burney As Keeper of the Robes to Queen Charlotte, her diaries provide an insight into the royal family and court life, including George III’s “madness”.

History Notelet by By M Bance

Best known as a novelist and playwright, Frances Burney was also a diarist. She began a diary at the age of 16 and went on to chronicle personal and public events from the early reign of George III to Queen Victoria’s coronation. After the French Revolution, Frances spent time in France and whilst there made medical history by documenting her own mastectomy, which she underwent without anaesthesia.

In 1778, when Frances was twenty-six, her first novel, Evelina, was published anonymously. Written in secret and in a disguised hand, its mix of social comedy and realism made it a hit with London society and led to much speculation as to the identity of the writer, (verdict: definitely a man).

Evelina’s success forced Frances’ family to reconsider their position on female writers and allowed her to publically admit her authorship. Frances was taken up by literary and high society and became the first woman to make writing novels respectable.

Frances created a new school of fiction, one in which women were portrayed in realistic, contemporary circumstances and in doing so she laid the groundwork for future female novelists, including Jane Austen.

Frances (Fanny) Burney (1752-1840) master of the novel of social courtship and, according to Virginia Woolf, “The Mother of English fiction.” A frequent visitor to 77 West Street, Brighton.