The Hangman and the Corrupt Banker

For months now our newspapers have been full of stories about bankers, fraud and corruption, so much so that I must admit to feeling a tad weary of the subject. Until that is I found a story about a corrupt English banker who had forfeited his life for his crimes, and discovered that both he and his hangman had lived in Brighton.

Henry Fauntleroy (1784-1824) had a house at the west end of Codrington Place and was a partner in a leading London banking house, Messrs March, Stacey, Fauntleroy and Graham, of Berner’s Street. Henry had succeeded his father as managing partner and the firm, trusting him implicitly, were content to leave the whole conduct of the establishment in his hands. But this was a difficult time; England was at war with France and money was tight, not only for the government, but businesses and individuals alike. So, when a firm of speculative builders to whom Henry had advanced money collapsed, involving the bank in a loss of £60,000, the Bank of England scented danger and withdrew their line of credit. It was then that Henry, in an attempt to preserve the credit and respectability of the bank, threw honesty to the winds and adopted the expedient of forgery.

He was very successful at this, bringing forgery to something near an exact science, all the while keeping both the defrauded and his partners in the dark. Forgery was used to cover forgery, until eventually nearly £400,000 worth of Government stock had been appropriated. But it could not last and Henry was arrested on 10 September 1824. He stood trial at the Old Bailey in October and, despite seventeen ‘gentlemen of the highest respectability’ i.e. other bankers, giving evidence as to his honour and integrity, was found guilty on 12 counts of deception, fraud and forgery. After his conviction, powerful influence was brought to bear on his behalf and his case was twice argued before judges on points of law. An Italian named Angelini, no doubt inspired by a desire for newspaper celebrity, even offered to take Fauntleroy’s place on the scaffold, but all to no avail and he was executed on 30 November 1824. The execution took place at Newgate and the number of people assembled to watch was estimated at nearly 100,000. The roads were blocked and every window and roof, which could command a view of the proceedings, was occupied. It was in fact the largest audience the executioner and fellow Brightonian, James Botting, ever achieved in his career as a public hangman.

James was born on 7 May 1793 and lived in a property owned by his father, Jemmy Botting, just off West Street, a building known at Botting’s Rookery with a reputation for housing the town’s less savoury characters. Nicknamed Jack Ketch, after his chosen profession, James commuted to London to do his duty in the city. He personally boasted that 175 men and women had lost their lives at his and his assistant’s hands. His most notable hanging was that of Henry Fauntleroy, but he was also responsible for despatching the Cato Five, the group (so-called because they were apprehended in a hayloft in Cato Street, Paddington) who had conspired to murder members of the British Cabinet. The five included former butcher James Ings, who had once worked in Cranbourne Street, Brighton. In 1820 Botting did the court’s bidding by conducting the public hanging, then he handed over to a masked surgeon who undertook the final part of the court’s sentence, that of decapitating the corpses. It was, incidentally, the last time that a legal beheading was performed in England.

In later life James suffered from a form of paralysis and was forced to give up his job and live on a pension of just five shillings a week granted by the Court of Aldermen of the City of London. He supplemented this meagre income with free drinks given in return for tales of his days as Newgate Gaol’s official executioner. Eventually, his disability became so great that he could only drag himself around to the pubs he liked to frequent by using an old seat with wheels as both a crutch and place to rest.

James appears to have been a well-known character in Brighton, but sadly not much liked. Reports from the time describe him as ‘a pitiful object who shuffled about the street, shunned and disliked by his fellow townsmen’ and when he

fell from his wheeled chair at the corner of Codrington Place and Montpelier Road, where Waitrose is now, no-one came to his aid and he was left there to die.

James Botting died on 1 October 1837; however, his memory survives in the form of a local ghost story. According to this, on dark and windy nights his rickety-wheeled chair can be heard dragging past one of his old haunts, the Half Moon pub in Boyces Street.

Henry Fauntleroy, the corrupt banker, was the last person to be hanged for forgery in this country. This is perhaps how we should remember him, but more exciting is the wholly unfounded rumour that circulated at the time of his execution to the effect that he had escaped strangulation by inserting a silver tube in his throat and was living a life of luxury abroad somewhere. 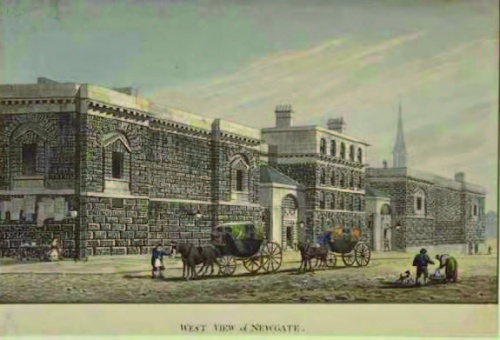