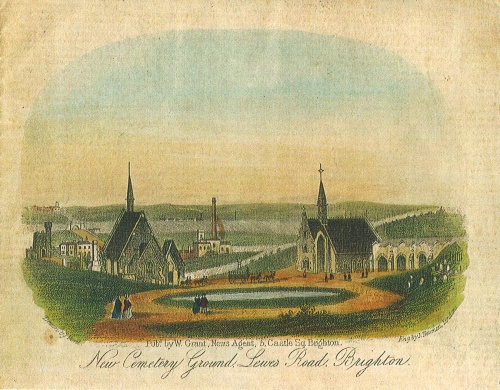 On the glorious evening of the 10th September the Brighton & Hove Open Door event The Paths of Glory lead to 10 Grade II Listed Buildings on the area of Tenantry Down known as The Lewes Road Cemeteries. The Byzantine oratory, Gothic Revival chapels, mausoleums, Egyptian Pylon and Tabernacle were Romantic and theatrical backdrops but the star of the evening was Nature herself. Golden lambent sunlight filtered through forest-size trees and shone on springy chalk down land turf pawed by badgers. The walkers could only agree with the late Anthony Dale, author of Brighton Cemeteries, that , “ The Extra-Mural Cemetery is one of the most delightful spots in the whole of Brighton.”. And we owe it all to water pollution. In 1850 the disposal of the dead threatened Brighton’s supply of clean water.

Dr. John Cordy Burrows, whose statue stands on Old Steine, and the Reverend John Nelson Goulty, protestant dissenting minister of Union Street Chapel, led the response to the public health crisis by forming a private company to create burial ground within the parish of Brighton, but at a convenient distance from the town. The Brighton Extra-Mural Cemetery Company paid £8,000 to acquire thirteen acres, 1 rod and 9 perches east of Lewes Turnpike south of the Bear Inn, from Isaac Bass, gentleman.

During 1851 builder Mr. John Fabian walled in and transformed the site with its gentle gradient between two steep banks to the plans prepared by the company’s architect Amon Henry Wild. Workmen created a right of way across the Marquess of Bristol’s land and completed the, now long-gone, Gothic archway bearing the motto “Mors omnibus communis”, which appropriate for Brighton’s first non-denominational burial ground translated, “Death is common to all men.” On the 14th August of that year, following a service in St. Peter’s Church, thousands of well-dressed people admitted by ticket assembled in the new broad Avenue Road off Lewes Turnpike to witness the consecration of the north east portion reserved for the Anglican Mortuary Chapel and burial of members of the Established Church.

H. M. Wagner, Vicar of Brighton, read the Sentence of Consecration, which was then signed by the Right Reverend Lord Bishop of Chichester, Dr. A. T. Gilbert, while the choir of St. Peter’ s sang verses of the 84th psalm walking up and down the former sheep pasture in solemn procession. On 2nd December 1851 non-conformist Phoebe Wells was the first of 145,000 souls to be buried in the five separate cemeteries, which today cover nearly 100 acres and form a vital green breathing place in the city of Brighton & Hove.

Woodvale, originally the parochial cemetery and home to a distinguished collection of ornamental and specimen trees, is listed in the National Register of Parks and Gardens as a grade II burial ground. English Heritage compiles the register to encourage the protection and conversation of important green spaces. Don’t be mislead by the adjective parochial into thinking that Woodvale, which absorbed the bankrupt private Extra Mural Cemetery in the 1950s, ever offered the visitor narrow local history. The heritage includes trees ,birds and foxes, significant characters and flamboyant memorials recorded in the Brighton Urban Wildlife Group’s guide and the Walkers’ Guide to Lewes Road Cemeteries both published and distributed free of charge by Brighton & Hove City Council’s Bereavement Services.

Mrs. Maria Jackson, wife & mother, was the beloved sister of pioneer photographer Julia Margaret Cameron whose dramatic idiosyncratic portraits and tableau captured the energy, sentiment and enigma of Victorians of high faith and grave doubt in the early years of Darwin’s challenging theory of Evolution. Maria is an ancestor of Bloomsbury artists and writers.

Sir James Knowles KCVO, architect and magazine publisher, laid out broad avenues in Hove but also built a home in Sussex at Black Down for 19th century poet laureate Alfred Lord Tennyson whose verse Crossing the Bar is quoted on the memorial of Fred Collins, Captain of the Brighton pleasure boat The Skylark.

Visitors seem cheered to recognize the family grave of local public servant Dorothy Stringer OBE, who is being celebrated during their 125th anniversary year as Varndean School’s most distinguished Old Girl.

Get exploring in the footsteps of novelist Peter James’ Detective Inspector Roy Grace as he visits the morgue for forensics and romance with the coroner or join a free healthy delightful circuit in clean air with bird song a stone’s throw from the noise and pollution of Vogue Gyratory system.. Make the rural and mysterious Lewis Road Cemeteries your Urban Fringe route of choice to the Bear Road boundary of our long awaited South Downs National Park then back again to the public transportation and public houses of the City by the Sea. Open 365 days a year.