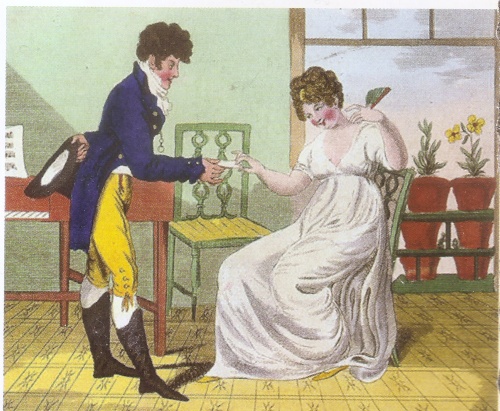 We might be forgiven for thinking that today’s internet dating, introduction agencies and lonely hearts advertisements are a modern phenomenon, but the open search for love and marriage dates back centuries. The first known ‘lonely heart’ advertisement in the world (supported by firm evidence) appeared in England in 1695, in a weekly pamphlet. The Licensing of the Press Act restricting printing and publishing had recently lapsed, prompting a young man to place the following advertisement: ‘30 years old and in possession of a good estate and who desires to meet a young gentlewoman with a fortune of £300.’

Over the next half-century such notices became increasingly popular, particularly among the new Georgian middle classes, largely based in towns. Whereas the nobility and gentry enjoyed a prescribed social calendar providing opportunities to meet a suitable spouse, and ordinary country people generally married within their own small communities, the growing urban population did not necessarily have established social networks. Newspapers including The Times, Tatler and The Daily Courant frequently published entire pages of lonely heart advertisements and even a tax on adverts, imposed in 1712, did not deter the eager. Like today, advertisers promoted their physical qualities, with ‘sweetness of breath’ a common assurance of young men seeking prospective partners. Yet evidently economic status was more important: generally male advertisers revealed their financial position, typically including annual income and, sometimes, even that they were in the beneficial situation of expecting a sick or elderly relative to pass away shortly, leaving them a fortune!

Initially more men than women advertised, widowers often seeking a capable step-mother for their children, while traders generally indicated that their future wife would be expected to work in the family business. Sometimes widows sought a second husband, ideally one familiar with the trade established by their first, while occasionally ladies who felt ‘left on the shelf’ candidly expressed their hope of marrying quickly and starting a family almost immediately. Some women claimed not to be seeking a husband, but a position as housekeeper for a single or widowed gentleman – intimate domestic roles that more often than not led to a relationship.

Readers responding to advertisements often left a reply in the newspaper office, although many advertisers suggested an alternative venue through which to make contact, like a library, bookshop or coffee house. In the 18th and early-19th centuries many advertisements were London-focused, their large numbers suggesting that some people at least did achieve marital success in this way. During the Victorian era, as the population soared and more people swarmed into the cities for work, lonely heart columns expanded. Newspapers also grew cheaper throughout the 1800s and periodicals devoted solely to husband- or wife-hunting began to be published, with explicit titles like Matrimonial Gazette and Cupid’s Cosmopolitan Carrier. Gradually the emphasis of the notices also changed: while some practical information was usually provided, the romantic love match of royal role-models Queen Victoria and Prince Albert prompted more advertisers to admit that they, too, hoped for a ‘partner of the heart’.

By 1900 an incredible 25 publications in England alone were geared towards helping people to find a spouse. The average marriage age for females was around 25 and many young working women began to advertise for a husband, while growing numbers of men sought prospective wives willing to live overseas in the colonies. Before long, grim stories began to circulate about women who responded to even the most innocent-sounding notices, from terrifying tales of white slave traders to more general warnings about the risks involved when vulnerable women latched onto men about whom they and their families knew nothing. Some rumours of seduction and physical injury appeared to be true, with lurid descriptions making the headlines: it seemed as though the lonely heart craze was becoming uncontrollable, and from the early-1900s onwards the number of dedicated publications diminished.

Everything changed with the Great War. Newspapers like The Daily Express encouraged young women to write to lonely soldiers, and before long servicemen began to advertise themselves for correspondents. Evidently many were seeking romance and over time the government became concerned that its armed forces might be sharing sensitive information with total strangers. A competition run by Pearson’s Weekly in 1916 inviting soldiers to submit personal details in hope of being shortlisted for a date with the popular actress Phyllis Monkman was too much for the authorities. The competition was halted and magazines were asked to do their patriotic duty and desist from carrying lonely heart advertisements on behalf of the military. After the war, due to the tragic loss of life, the already female-heavy British population was boosted by even more women who would never have the chance to marry. Known unsympathetically as ‘surplus women’ they were often teased and lampooned in cartoons and, predictably, during the 1920s lonely hearts columns began to thrive again.

Advertisements were not the only way of meeting members of the opposite sex: another option was the matrimonial or introduction agency. The earliest recorded agency was established in London in 1650, the splendidly-named Office of Addresses and Encounters, catering for those with ‘a desire to dispose of themselves in marriage’. This pioneering facility met with little success, but a century later others appeared, like the Dover Street Marriage Agency (1775), which required gentlemen to describe themselves and pay five guineas before being introduced to suitable ladies. Fifty years later the Imperial Matrimonial Association ran a suite of London rooms for the use of male and female subscribers, who could drop in, read, chat, attend bi-weekly concerts and enjoy light refreshments.

The first serious national agency only became established in 1939 – The Marriage Bureau, launched by two ex-debutantes, Mary Oliver and Heather Jenner, who recognised a ready market among expats returning from abroad. Clients completed cards stating their age, religion, income, social position and interests and the two entrepreneurs proved highly successful at finding appropriate matches. Fees were high - £5 on joining, then £20 to be paid if marriage followed: when the average weekly wage was about £3, this was chiefly an exclusive service, although reportedly satisfied clients ranged from lawyers to bus drivers. After WW2, Friendship Clubs opened up and down the country, providing young working people with a safe environment in which to meet male and female friends through various social activities. Many of the original buildings still operate as social or sports clubs today, a testament to these special places where many past romances blossomed. Happy Valentine’s Day!