“May Everything Go Off Nice And Smooth This Xmas!” 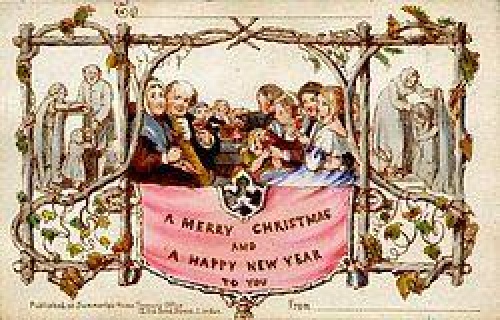 I know that Christmas is coming because I have had a “visitation”. Nothing particularly existential (or as disturbing as the face of Jacob Marley), more a dream involving my friend Sally! I dreamt of arriving at Sally’s house in Patcham where all was ready for Christmas – the perfect festive scene - the tree was beautifully decorated, at its foot were piles of beautifully wrapped presents and the mantelpiece was covered with cards. My mild surprise on arriving soon turned to panic when I realised that it was Christmas Eve and I had done nothing to prepare for my own family’s Christmas, had not even bought my cards!

I don’t know whether Dickens was shrewdly laying out the workings of the human psyche in A Christmas Carol, but my dream, just like Scrooge’s, was certainly a wake-up call – it is time to stop procrastinating and start doing something – at least buy the Christmas cards.

The first commercially produced Christmas card anyone could buy was commissioned by Henry Cole and illustrated by John Callcott Horsley in London in 1843. 2,050 cards were printed and sold that year for a shilling each. Since then, the exchange of greeting cards has become part of our traditional celebration of Christmas. Their popularity is such that the Greeting Card Association estimate 900 million Christmas cards will be sold throughout the UK this year.

Sadly, Sally will not be able to send her cards from her local post office this year, because it has closed after, it must be said, many Christmases. In fact, the post office first opened in Patcham on the 1st January 1847, closed in 1863 and was re-established by July 1890 by Joseph Harris, whose decedents ran the business until the 22nd September 2014. The Harris family steered their post office through decades of innovation and technological change and rightly considered themselves part of Brighton’s history as a postal pioneering town.

The first post office opened in Brighton in about 1750. It was situated near the south end of Middle Street. In 1779 the business was transferred to the library at the south end of the Old Steine and from there to Prince’s Place; then in September 1812 it moved to East Street. A new office was opened in North Street in 1827. Four years later it was in New Road, adjoining the Unitarian Chapel. Finally in March 1849, the post office established itself in Ship Street.

While premises were being settled on, the business of the postal service moved on. The Brighton, Ovingdean and Rottingdean penny post was introduced in 1814 and, five years later, mail collectors, ringing bells, were accepting letters around the town. To help facilitate the speedy delivery of these letters, a detailed map of Brighton’s postal district was compiled in 1824-5, on the instructions of King George IV. The first mail bag to be dispatched from Brighton to London by rail went on Saturday evening, 24th October 1847. The town’s first pillar-box was erected in March 1858 in Lewes Road. Later, Brighton was chosen to test some of the first letter sorting machines - Transormas – which were installed in the North Street sorting office in September 1935 and used until the introduction of the post code system in 1968. And, Britain’s first electronic stamp vending machine was unveiled in Ship Street, on the 5th August 1986.

Pioneering change, but this time of a different sort, was brought about by the Great War. With 46% of the country’s post office staff gone to fight (every employee was sent a letter encouraging him to enlist and by December 1914, 28,000 had obliged) women were taken on to fill the gap – for the duration only, of course. Brighton embraced this change and, on the 23rd August 1916, girls were employed as “postmen” for the first time by Brighton post office. When they started, horse drawn mail vans were used for collections and deliveries, but by 1917 motorised vehicles were beginning to be introduced onto Brighton’s street. And this move towards modernity could not have come soon enough to help deal with the staggering volume of post being generated; over 19,000 mailbags crossed the channel each day in 1917, with half a million bags conveyed in the run up to Christmas.

All mail bound for the Western Front was sorted at the London Home Depot which became operational in December 1914 and covered five acres of Regent’s Park. This was said to be the largest wooden structure in the world, employing over 2,500 mostly female staff, and during the course of the war, handling two billion letters and 114 million parcels.

For a few months after the start of the war, the sending of greeting cards was banned, for reasons of security and economy, but this prohibition did not last long; the Government quickly realised how beneficial Christmas cards would be in boosting morale. The cards sent did, however, change. They became ‘patriotic’, some had military type designs and illustrations and others showed simple, English scenes with swallows, flowers and boats. It was only later that the trend towards winter scenes, Christmas trees and Father Christmases began to dominate.

Nowadays, the visual imagery may be more sophisticated and the cards can take different forms, but they continue to act as a comfort to families separated and unable to spend the festive season together, and they remind those we love that they are not forgotten.

My thanks to Marion Devoy for her original research and help with this article. 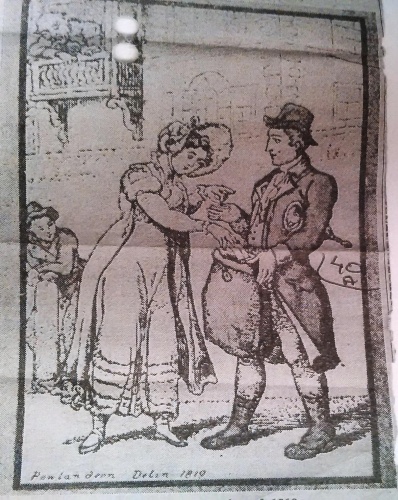 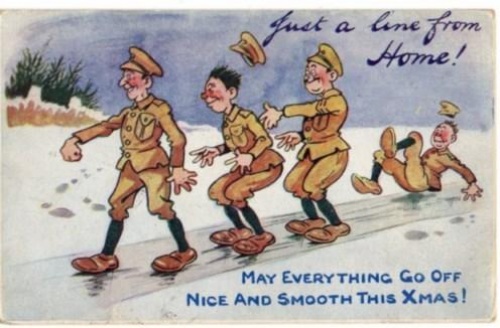