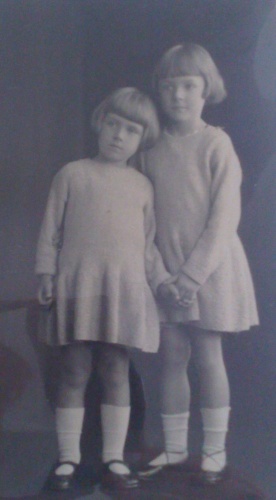 I loved Upstairs, Downstairs in the 1970s, I really loved the new episodes shown on the BBC last Christmas, but I really, really loved Julian Fellowes’ Downton Abbey. In fact I can’t wait for the second series later this year. These television dramas have given me a taste for Edwardian life; the lives of the servants “downstairs” and their masters “upstairs”; the gradual social and technological changes that took place in all their lives and how the two classes reacted.

Preston Manor is certainly not Downton Abbey, but it is our own Edwardian manor house and within its elegant rooms and servants’ quarters the life of a rich, gentry family and their servants, in the period before and after the First World War, was played out. Ursula Coventry, born 1919, witnessed this life first-hand and has written down some of her memories for us to share:- Memories Preston Manor by Ursula Coventry (nee Gaselee) Dictated March 12th 2011 to her daughter, Catherine McGowan

My parents, Stephen (later Sir Stephen) and May (known as Mollie or Gigi) Gaselee knew the owners of Preston Manor, Sir Charles and Lady Ellen Thomas-Stanford, fairly well. Perhaps the connection had been formed as both men were classics scholars, and Sir Charles wrote a book about Madeira, an island they both knew well and were very fond of.

As far as I remember, Ellen was my godmother. I visited them at Preston Manor at least a couple of times as a young girl, in the mid-1920s, with my parents, my younger sister Judy and our nanny. We were told to call Ellen “Aunt Nellie” although she wasn’t any relation to us. As small children we were expected to keep very quiet and not be any bother since the couple were already quite elderly. We were instructed not to run. “If she calls you, just walk.”

Judy and I slept in a bedroom at the top of a side staircase. On one visit, my mother asked her hosts, “Who was the lady coming down the stairs? Are there more rooms above?” They replied, “We didn’t want to tell you because we didn’t want to alarm you - we do have a ghost but she doesn’t do any harm.” My father advised them to call in the local exorcist.

I have always loved animals, and I have fond memories of their dog Sturdy. He was just a puppy, and he loved running around with us two little girls. However, we were told off because we were “making him over-excited”, and when he got very muddy in the flower beds, the maids were not pleased to be told they had to bath him!

Ellen and Charles Thomas-Stanford loved dogs and liked to take rescue animals; most were much loved and buried with fond inscriptions in the pet cemetery, but one dog, Tatters, never really settled with them nor won their affection. I can still remember his inscription: “Here lies Tatters/Not that it much matters.”

When I was there many years later on a coach trip, I looked for Sturdy’s tombstone but he was not buried there. I think he outlived his owners and was doubtless well-provided for.

There was a large staff. Especially memorable was Maurice Elphick the butler, who went completely deaf, so not much use as a butler, but the Thomas-Stanfords were kind people and he was kept on as he still knew what was what.

They had a chauffeur and once he was sent to help mother when we broke down en route from either London or our cottage in Burgess Hill. My mother drove well. She called our car The Snip, because that is what the man said when she bought it from him, “It’s a snip, madam”. On this occasion we were left stranded on a steep hill (my father wasn’t there all the time – he was busy working in the Foreign Office) so the Thomas-Stanfords sent their chauffeur. He arrived looking very smart and wasn’t pleased to get dirty fixing the car.

Nanny had to make our clothes – she crocheted yellow dresses with blue trimming. To make them last, she added more crocheted rows at the bottom as we grew. There was no question of us changing for dinner, since we were considered too small to stay up. We just had something on toast for our tea. Aunt Nellie wore rather shapeless garments with flowing skirt, blouse and maybe a little jacket.

There were lots of tall attractive maids who wore a dark uniform. Once the maids asked if they could go on an outing to the sea on their day off, which caused a great kerfuffle, but with many warnings and precautions they were allowed to go, duly chaperoned!

At Preston I had the best ice-cream I have ever tasted in my life, made with real cream and fruit. I’ve never forgotten it!

There were no other children at Preston Manor, apart from my sister, Judy, and myself. I was not aware of the servants having any children and the Thomas-Stanfords surely had none of their own - just the notorious Jack from Ellen’s previous marriage. We never spoke of Jack – he had wasted his life on wine and women.

There was no interaction between upstairs and downstairs. We were just visitors and it was quite formal. The great thing was to BEHAVE! We did our best.

I can picture in my mind a number of China dogs displayed in pairs, each with one paw up and with the other one down, admired by the adults but rather boring to a child. The grown- ups had their world and we had ours and we were expected to keep to it!

I believe Aunt Nellie died when I was still young [11 November 1932], but we were never told about such things as it wasn’t deemed a suitable subject for children. 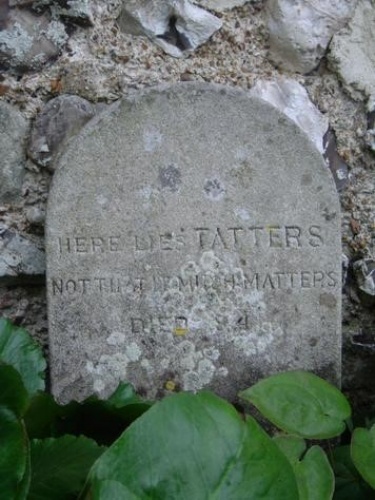 The pet cemetery is believed to be the only one in Sussex. Four cats and 16 dogs are buried in the plot in the southwest corner of the gardens.