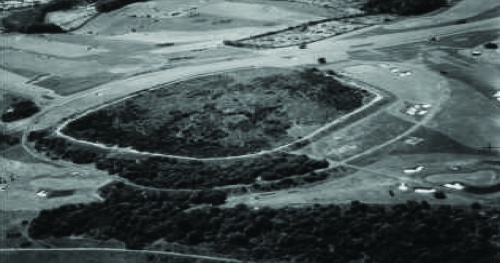 An aerial view of Hollingbury Camp, showing features of the Iron Age hill fort and of the surrounding landscape. Dating from the sixth century to about the middle of the second century BCE, it is a scheduled ancient monument, covering about 9 acres in a rough square about 600 feet across, with gateways to east and west through ramparts that can still be seen. The camp was excavated in 1908 by Herbert S. Toms, a Curator at Brighton Museum, by Cecil Curwen and Brighton and Hove Archaeological Society in 1931, and by John Holmes in 1967. The sites of some wooden huts have been discovered within the fort. PHOTOGRAPH by (unknown)

Midsummer is the magical time when the days are longest, the nights are shortest, and our hopes for that seemingly elusive long, hot summer have not yet been shattered. A time when spending the evening in a pub garden becomes an attractive prospect.

For ancient people Midsummer was a magical time too. Evil spirits were said to appear and people collected flowers and herbs to protect themselves. One of the most powerful was the plant known as ‘chase-devil’, which we now call St John’s Wort. People used it in potions and wove the flowers into garlands to decorate their houses. They believed that the herb was imbued with the power of the sun and could not only shield them from the power of evil spirits, but could help them foretell the future.

Midsummer fires were lit in high places all over the countryside and people stayed up late to welcome in Midsummer’s Day and, when the fires died down, men ran or jumped through the embers to bring good luck. Folklore suggested that the height reached by the most athletic jumper, would be the height of that year’s harvest. Fire was also used to bless domestic animals, generally by walking them around the fire in a sun-wise direction.

The Summer Solstice, 21st June, the actual day on which the sun climbs to its highest point in the sky, is when people in antiquity gathered to celebrate the sun and its life-giving power. On the night before Midsummer white-robed Druids still gather today at Stonehenge, on Salisbury Plain in Wiltshire, to watch the sun rising. As it comes up, the sun rises exactly over the Heel Stone, one of the stones that lie outside the main circle at Stonehenge.

A sacred area and burial ground nearer to home that might well be described as magical or, at the very least, somewhere you can see the most beautiful sunrises is the hillfort at Hollingbury, off Ditchling Road. Hollingbury Camp, or ‘Castle’ as it was known in the 19th century, dates back to the Bronze Age. The four disk barrows within the ramparts are burial mounds for local Bronze Age tribes and probably date to around 1,500 BC. Today, the mounds appear empty, the metalwork and high status artefacts that every archaeologist dreams of finding taken long ago by looters and all traces of human remains eroded by the local acidic soil.

In the 6th century B.C. (over 2,500 years ago), an Iron Age hillfort was constructed and the site developed into a defended settlement. The gentle banks that you can now see suggest an impressive defensive structure consisting of a massive wooden wall rising some two or three metres from a white chalk-cut ditch. The wooden palisade structure enclosed a large area; in the southwest corner evidence of small huts indicates some kind of permanent settlement once stood there.

During the Romano-British period a structure, possibly even a temple, may have existed at the hillfort. But, despite local tradition, there is nothing to suggest the site was ever used by the Romans as a military or defensive ‘camp’. It is more likely that its use was connected to the agricultural landscape and the intensive farming of the Downlands immediately to the north of the hillfort.

The next available evidence for use of the hillfort does have military connections. It is claimed that the site was used for a warning beacon during the Napoleonic wars. Then, during the First World War, trench-digging exercises were carried out there.

Today Hollingbury Camp is managed by Brighton and Hove City Council as a golf course. It is a wonderful place to take a walk, or watch the sunrise on Midsummer’s Day if you are so inclined. But, if you are tempted to visit during the hours of darkness to await the dawn, remember that the Saxons attached magical significance to mounds such as those at Hollingbury. They understood that such mounds contained treasure, but believed them to be protected by elf-magic or powerful worms - that is dragons to you and me! 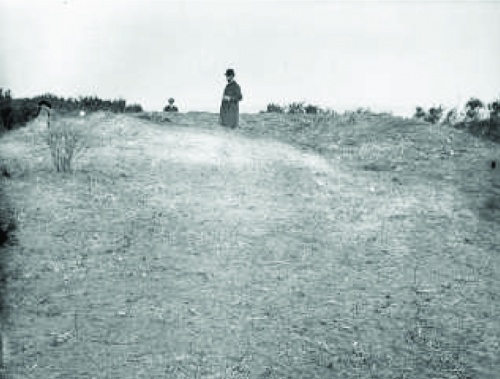 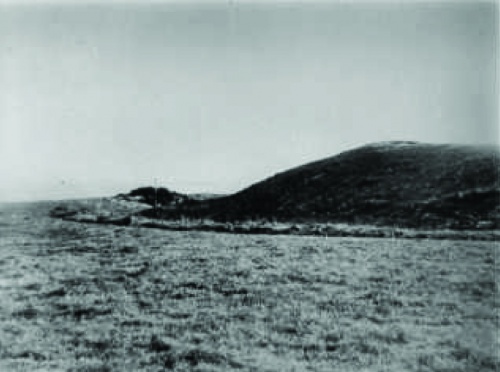