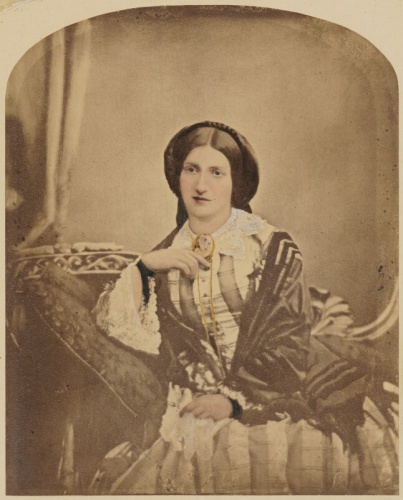 The first collections of recipes and hints for good kitchen practice were published in the late-1700s, followed by improved volumes in the early-1800s. However it was not until the mid-nineteenth century that the most famous of all domestic handbooks was published, the Victorian classic: Mrs Beeton’s Book of Household Management, also published as Mrs Beeton’s Cookery Book. When Isabella Mary Beeton (1836-1865) launched her comprehensive manual in 1861 it was the first book edition of what had originally appeared in parts - one of a series of guidebooks published by her husband, London publisher Samuel Beeton. Unlike earlier cookery and domestic books, the recipes were highly organised and the pages generously illustrated, raising it high above other titles. Although, sadly, Isabella died in 1865, aged only 28, her popular book remained a best-seller: indeed, after her death it was continually revised, reprinted and extended until it reached over 2000 pages in 1907! For decades it was the most frequently consulted cookery book, earning Mrs Beeton a reputation akin to that of more recent cooks Delia Smith and Mary Berry.

Mrs Beeton’s Book of Household Management was intended to educate and assist both ladies and their servants in the smooth running of the house. To an extent it was an aspirational work, providing helpful tips and setting standards for the instruction of those ascending the social ladder; for, as the middle classes expanded in industrial Britain, it was felt that the nouveaux riches might need guidance in how to conduct themselves in polite society. In addition, the new Victorian emphasis on the comforts of hearth and home elevated the lady of the house to angelic heights, an idealised charming, subservient wife and gentle, doting mother whose marital duty was to organise the running of the home and meet the needs and comforts of the entire family. A young wife herself, Isabella particularly aimed to help the inexperienced new mistress of her own household to fulfil the many bewildering social and domestic responsibilities that came with marriage. Most of Mrs Beeton’s genteel readers employed one or more domestic servants and her book was directed at both the mistress of the house and the housekeeper, cook or general maids to whom she delegated household chores, depending on the size and nature of her establishment Ever sensible and practical, she advocated the highest standards for both the lady and her staff and when it came to kitchen matters, she set out in no uncertain terms some basic rules:

Cleanliness – a dirty kitchen is a disgrace to both mistress and maid Be clean in your person, paying particular attention to the hands Do not go about slipshod - provide yourself with well-fitting boots Provide yourself with at least a dozen good-sized cooking aprons made with bibs When in the midst of cooking operations dress sensibly – the modern crinoline is dangerous, out of place and absurd Never waste or throw away anything that can be used for other dishes or servants’ food Attend your larder well and scrub it out completely twice a week If you have a spare kitchen cupboard keep baked pastry in it. This will preserve it better than in the larder Do not be afraid to use hot water in washing up dishes Clean your copper cooking pans regularly. Use turpentine and fine brick dust rubbed on with a flannel then polish with leather and dry fine brick dust for best results Such regimented procedures are summed up in one of Mrs Beeton’s oft-quoted statements: ‘As with the commander of an army, or the leader of any enterprise, so is it with the mistress of a house.’ In short, she advocated running the kitchen with the energy, efficiency and precision of a military manoeuvre. I doubt many of our kitchens would pass muster today….

Mrs Beeton wrote extensively about food preparation and meals, including the origins and characteristics of different produce, nutritional values, seasonal recipes, and tried and tested cooking methods. At the time of her writing, the concept of a festive Christmas with fir trees, decorations, cards and crackers was rapidly becoming established in Victorian Britain, influenced by the writings of Charles Dickens, royal practice, revival of ancient customs and a rising tide of consumerism.

Some seasonal dishes were already centuries old, such as Christmas pudding, while others were more recent innovations and Mrs Beeton published a number of dedicated recipes for enjoyment at

Mrs Beeton wrote of turkey, popular at Christmas since the 16th century: ‘A noble dish is a turkey, roast or boiled. A Christmas dinner, with the middle classes of this empire, would scarcely be a Christmas dinner without its turkey; and we can scarcely imagine an object of greater envy than is presented by a respected portly pater-familias carving, at the season devoted to good cheer and genial charity, his own fat turkey, and carving it well. The only art consists, as in the carving of a goose, in getting from the breast as many fine slices as possible….The breast is the only part which is looked on as fine in a turkey, the legs being very seldom cut off and eaten at table; they are usually removed to the kitchen, where they are taken off, to appear only in a form which seems to have a special attraction at a bachelor’s supper-table, - we mean devilled: served in this way, they are especially liked and relished.’

Mrs Beeton’s recipe for Christmas plum pudding - a rich seasonal dish originating in the middle ages - used 15 ingredients: moist sugar; finely-chopped suet; sultanas cleaned; raisins halved and stoned; currants washed and dried; shredded mixed candied peel; breadcrumbs; flour; almonds blanched and shredded; lemon rind grated; eggs; nutmeg grated; salt; milk; and a wineglassful of brandy. Essentially this was the prototype of the Christmas pudding recipe used by my grandmother (married in 1915 when every housewife had a copy of Mrs B), then handed down to my mother – a heavy, fragrant pudding blend that we heaved around the bowl as children in the 1960s/70s on ‘stir-up Sunday.’ It was all part of the lead-up to Christmas. Yet, how many ladies go to those lengths nowadays, or have time to follow many of Mrs B’s gloriously complex recipes? Some, but not many working women. Regretfully, it’s back on the shelf for Household Management and off to the shops… Merry Christmas!