The Past is a Different Country 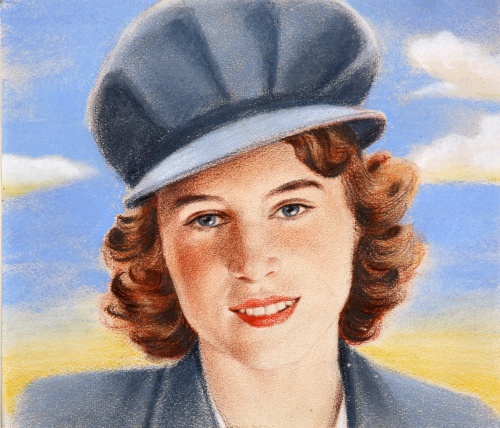 The Elizabethan Age – A time of Revolutionary Change and Innovation.

It the time of her accession the Queen was just 25 and mother of Charles and Anne.

We were a lot poorer in Britain at the time of the Queen’s Accession, the average wage was just £5 - £105 in today’s terms after inflation. The average house cost £2064 and only 8% of the population owned their homes - compared to almost 70% today. There was less pressure to buy, many people were housed by the local authority and did not even consider buying.

It was an optimistic time; wages were on the move and nearly doubled during the decade. Not only were we proud to have a new Queen but TEA finally came of the ration list! And the tea bag was invented! Easy clean Formica surfaces began to appear in the home. Life in the kitchen became easier and cheaper too with the new must-have gadget the Pressure Cooker. Topped perhaps in 1952 by the invention of Bird’s Eye Frozen Peas and our national staple, Fish Fingers. More! The fabulous Morris Minor and its lovely companion the Morris Traveller came out as well as the extraordinary Bubble cars (manufactured under license in Brighton). GOING OUT FOR A DRIVE WAS CONSIDERED A LEISURE ACTIVITY. Refrigerators started to be conceivable homeware and by the end of the decade about 13% of homes had one. Another new-fangled gadget, the Ball Point pen, hit the shops in 1958 at a shilling a pop - equivalent to about £2.50 - and causing national panic about the ruination of the nation’s handwriting. The culinary adventures of the decade continued apace with SPAM fritters, and Walker’s introduction of the first FLAVOURED crisps - Cheese and Onion - in 1954, the same year as Britain got its first taste of swanky Yankee Burger bars, Wimpy.

Elizabeth gave birth to her third child, Prince Andrew, in 1960, which was the first birth to a reigning British monarch since 1857. The Queen and Philip's fourth and final child, Prince Edward was born on March 10, 1964.

The Sixties were famously ‘modern’: The Beatles and all manner of music; there were Miniskirts (+tights!); Mini Dresses and even Mini cars. The timeless Mini Cooper was launched in 1960 and was an immediate success, selling 116,000 units in 1960 and 157,000 in 1961. It quickly became THE British car to be seen in and celebrities and film stars made it their car of choice. At work and school, the very hip, space-age, Cartridge Pen came out and the hazard of kids with bottles of Quink Ink became a thing of the past. In the home, Twin Tubs were eagerly bought to ease the load, although lifting the sodden clothes from the tub to the spinner still remained heavy work. But moods were lifted by the launch of yet ANOTHER flavour of crisp – Salt and Vinegar in

Whilst discotheques opened and ‘free love’ became normal, the 1960s were also years when going to Tupperware parties was quite the thing to do. The parties gave mothers the opportunity to socialise as well ‘business experience’ and to earn their own money - well before long-day professional childcare was available. Women at work were still primarily in a secretarial role. Electric Typewriters were all the go. The new state of the art IBM Golf Ball invented in 1960 significantly reduced the effort required and magically enabled type fonts to be changed just by replacing the ball! Women’s time was saved by the swarm of supermarkets on our streets. Initially there was resistance to this ‘anti-social’ shopping, but the sheer convenience and irresistible prices won everyone over in the end. The High Street was changed forever and women’s inexorable march in the workplace began.

Significant social changes took place during the decade: perhaps most importantly women gained much more control over their lives & bodies with the introduction of the contraceptive pill in 1961 - for married women only, until 1967. The school leaving age was raised from 15 to 16 in 1964, possibly heralding a change in the aims of education and presaging the demise of subjects like metalwork, woodwork and domestic science...

The latter part of the 60s exploded with the mind-boggling discovery of North Sea Gas and Oil. Using it necessitated a nation-wide conversion of every gas appliance to handle natural gas (as opposed to the previous ’Town Gas’). The project took ten years to complete and had its biggest effect during the 1970s. It was an exciting period that seemed rich with possibilities.

Perhaps the most lasting change - apart from the loss of proper Policemen’s Helmets, winning the World Cup and colour telly - that had its genesis in the Sixties, was the advent of package holidays to Spain. Freddie Laker, at Gatwick, being large amongst them. It changed Britons’ outlook in general and to our food in particular. Unheard of delicacies like Spaghetti Bolognaise and Olive Oil began to make their way into British lives. Although, it was also the heyday of the cutting-edge pineapple chunks and cheese on sticks…albeit we were starting to eat them with that new stuff - WINE.

Although it cannot be changed or even, being realistic, regretted, the Seventies were a rather depressing time in many ways. The machines were on the march. It felt like a time of homogenisation: computers - huge room-sized computers - ruled the roost. Thing after thing became automated. Computerisation was aided in great part by Decimalisation in 1971. Virtually all the ways we measured our lives changed. Gone were pounds, shillings and pence - in came 100 rational pennies to the pound. Out went yards, feet and inches. Metres and centimetres came in. Out went pounds and ounces, in came kilograms and parts thereof. (All very discombobulating, although ..oddly ..we retained miles and gallons). 1970 brought ‘postal codes’ too, and our quirky adorable addresses shrank to a 6-part code. No longer was our mail sorted incredibly cleverly by highly skilled people on the night train – it was heaped in lumps and sorted by machine, arriving unloved and unseen. Rutland disappeared, so did large parts of Yorkshire and Lancashire – to be replaced by the numbing ‘Humberside’ or ‘Greater Manchester’. Somebody seemed to have taken the romance out of the country. Weird symbols started appearing on things to enable machine sorting and capture – OCR codes, mysterious lines and other hieroglyphics on everything we bought… But at least we sat in laundrettes instead of labouring over Twin Tubs!

The era of Ten Pound Poms ended in 1972, after 25 years and 1.5 million people leaving for Australia.

BUT the modern age wasn’t all bad – the improbable Reliant Robin appeared in 1973! We realised if we just had mixer taps, we could have a shower – like an American! Almost all homes now had refrigerators. We had central heating installed using the wonderful Natural North Sea gas. McDonald’s arrived with their 50p burger and an ashtray on every table! We had Findus Crispy Pancakes and Arctic Rolls. Many homes had the most amazing stereo systems and we would marvel at them and the complex music their excellence encouraged. We stopped having to do the Maths. Pocket calculators came out in 1974, priced at an unaffordable £49.95..but two years later cost 7 quid. Two million homes had Teasmades. Clock Radios woke people up to music, instead of a nasty bell. The Equal Pay act passed in 1970, although some would argue it has yet to be enacted… The Sex Discrimination Act followed in 1975. Miniskirts were out – Maxiskirts were definitely in.

Marriages of Prince Charles and Lady Diana July 1981 and Prince Andrew and Lady Sarah Ferguson in 1986.

The recognisable modern age was well underway. Smaller, umbrella-style baby buggies were the norm, making life so much easier for the mum on the move… not to mention the space saved in the hallway... DNA fingerprinting began in 1984 and has proved a godsend with its certainty. Shopping became quicker once goods started to be scanned in shops, as over 70% of goods now bore a bar code. The invention of ATMs and Bank Cards freed us from the tyranny of short banking hours. We had automatic washing machines – so we were doing something else rather than sitting in a launderette, or hauling wet washing from one tub to another. But if we still had to visit a laundrette at least we could listen to a Sony Walkman to pass the time or, if we were really edgy, we could set up a ghetto blaster!

Perhaps we became more insular as Home Entertainment became a thing, with our Video Tapes and CDs?

A Filofax was a ‘must have’ accessory (for Yuppies, remember them?) during the early 80s - before it was severely pushed into touch by electronic organisers. Disposable cameras were also a thing for heaven’s sake..

The fascinating Space Invaders game replaced darts for some in pubs. But on a night in we could play Pac Man on our Personal Computer, fiddle about with Tetris – an obsession for many in 1984... Or watch the new Sky TV channels, launched in 1989. People were starting to interact with computers in the office as well, with locally built bespoke systems. By 1985 personal mobile phones were starting to hove into view … although rather too large to be comfortable, or affordable. People who used them were somewhat of a laughing stock. Oh! How times change.

Now we are really getting near home. The Nokia mobile phone was a smash hit in 1992. It held 99 numbers and could be used for TEXTING.

We were tempted by Pop Tarts, though soon thought better of it – after a trip to A & E.

The Home Entertainment Industry really got going and held our attention with the launch of the Sony Play Station in 1994. DVDs followed in 1996. And the world changed with the launch of Google in 1998. Shopping was revolutionised when Amazon arrived in the UK in 1998, by 1999 it was the biggest sales platform in the world and decided to extend its offering, adding music and DVDs to the start-point – books.

What felt like almost-free travel kicked off, Ryan Air becoming the dominant player in 1995. City Breaks for all!

The world was our oyster was it not?

Quite apart from us surviving the Horsemen of the Millennium Apocalypse, T-mobile launched the first camera phone in 2002 – customers had to pay an extra £20 a month to use the service but the day of the selfie had dawned. (Interestingly, it took ‘till 2014 for anyone to think of the Selfie Stick). Broadband was launched in the UK in the same year. The oracle that is Wikipedia set sail in 2001. Everything changed in the workplace as the computer revolution began with the launch of Microsoft Office in 2003. In fact, work started to follow us home - as laptops outsold desk tops in 2005 for the first time. Online banking, launched 1997, really started to gain trust and popularity and change the way we managed our finances – & bringing new problems with it of course. …

The iphone was launched in 2007.. and hasn’t stopped launching since.

We celebrated Her Majesty’s 90th Birthday 21st April 2016. We shared the grief she felt at the loss of Prince Philip 9th of April last year.

So many decades, so much change. Things are better in countless ways – where we have ended up would have sounded like science fiction at the start of the reign. Not all of it is unalloyed good of course. We need to guard against becoming ‘extensions of machines’, treasure our humanity and frailties. We need to make good the environmental damage and pollution we have so carelessly caused. The age brought us new ways to appreciate the world – our hearts ached to hear whale song for the first time in 1970 and again when we saw our small blue-marbled planet from space in 1972.

Apart from the abundance of technological change there has been social change too. Perhaps appropriately, during the reign of a Queen, life has changed most for women. But men are so much more part of family life now – enjoying taking part in raising their children and absolutely everyone benefits!

It’s strange how the closer something is, the less perspective we have. Suffice to say, it has been an interesting ride… And the rest will be history.