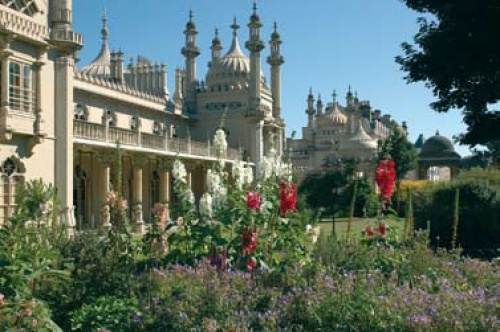 As we all know, Queen Victoria wasn’t a fan of the Royal Pavilion and when her seaside residence on the Isle of Wight was completed she took the opportunity to strip the Pavilion almost bare, leaving it to become the property of the town in 1850. From that time the gardens changed, new paths were laid and seats placed in the shrubbery walks making them the place in the town for promenading.

Over the years as fashions and needs changed the gardens were subject to further alteration and they eventually became part of a routine Parks Department bedding scheme, which for several summers included Brighton spelled out in pansies at the entrance. The paths were laid out as straight “desire lines” and a tarmac service road ran up to the front of the Pavilion, cutting the building off from the gardens.

But, following completion of the restoration of the exterior of the Royal Pavilion in 1992, the decision was taken to restore the gardens to their original appearance as designed by John Nash. Key to making the gardens resemble their former layout was the grassing over of the service road, the reinstatement of Nash’s main carriage drive, which curved from the Dome over the western lawn to a turning circle in front of the porte-cochere, and the replanting of the ‘forest lawn’.

Little physical evidence of the original garden layout remained, only a few surviving trees, Dutch Elm Disease and the 1987 hurricane having taken their toll. Therefore, work had to virtually start from scratch with detailed research required to make sense of the beds shown in Nash’s plan and to establish the guiding principles that were to be followed in the replanting. This work was greatly assisted when the Director of the Royal Pavilion, Jessica Rutherford, discovered the original planting lists. Indeed, a complete record of accounts relating to the Pavilion Gardens was found amongst many vellum bound books that recorded the expenditure on the Royal Pavilion at the time. Meticulously written, detailed and dated they confirmed the garden’s creation and gave an insight into the initial ground preparation, plant lists, labour requirements, tools and itemised “beer for Mr Nash’s men”.

Restoration was able to proceed with confidence, (but probably without the beer rations) and today this unique Regency garden is at the heart of our City life. Much more than a museum piece, it has been recreated for the pleasure of all and is the backdrop for many Brighton events.

From Monday 25 to Sunday 31 May the Royal Pavilion is holding its second annual celebration of the Grade II listed gardens. During Gardens Week 2009 the organically tended gardens will come alive with a full programme of talks, tours, practical workshops and family activities taking place. Many events will be held under the cover of a traditional Swedish Hat Kåtas tent, which will be erected in the Pavilion Gardens for the final three days, Friday 29 to Sunday 31 May.

To book your tickets for what promises to be a fantastic week of flora and fauna, visit the Royal Pavilion Shop or telephone 03000 290902. All tickets include full admission to the Royal Pavilion www.royalpavilion.org.uk. Remember Brighton & Hove residents pay only £4.40 admission with up to four accompanying children free. Each person requires proof of residency (council tax or other bill) in BN1 BN2 BN3 or BN41 postcodes.