Seven Dials, In The Parish of St Giles, London 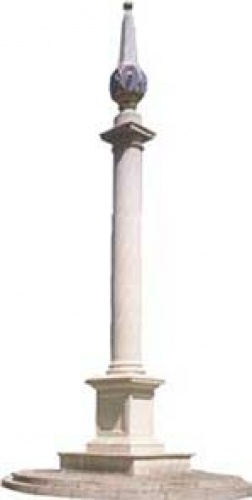 Today Seven Dials is a small road junction in London’s West End, north west of Covent Garden and just to the south of Shaftesbury Avenue. Like much of London, Seven Dials has been subject to rises and falls in popularity and affluence over time, more recently, however, it has experienced a wonderful regeneration. This has included the re-erection of a column at its centre, on the summit of which are seven sundials, which keep correct time to within 10 second - no small accomplishment for a sundial!

In the Middle Ages, the land on which Seven Dials is situated belonged to the Hospital of St. Giles, a leper hospital, which was taken over by Henry VIII in 1537. The Crown subsequently let the hospital land on a series of leases. In 1690, William III granted Thomas Neale, freehold of the land known as 'Marshland' or 'Cock and Pye Fields' (named after a public house on the site) in return for his raising large sums of money for the Crown. This was a substantial financial commitment for Neale and he had to find a way to lay out a development that would maximise profit. His solution was imaginative; by adopting a star shaped plan with six radiating streets (subsequently seven were laid out), he dramatically increased the number of houses that could be built on the site. Plans submitted in 1692 to Sir Christopher Wren, the Surveyor-General, for a building licence showed at least 311 houses and an estate church.

Construction started in March 1693 and as soon as the seven streets had been laid out, sewers installed and the initial corners developed, Neale commissioned Edward Pierce to design the Sundial Pillar to be placed at the very centre of the site. Six sundial faces (the seventh style being the column itself) topped the Doric pillar with a dial facing each of the streets - Great Earl Street, Little Earl Street, Great White Lion Street, Little White Lion Street. St Andrew’s Street, Little St Andrew’s Street and Queen Street. Neale aimed for the site to be popular with respectable, well-off Londoners, following the successful development of the nearby, fashionable Covent Garden Piazza area. The first inhabitants were, indeed, respectable gentlemen and prosperous trades people, but unfortunately this did not last. From 1695, when Neale disposed of his interest in the site, the area started to deteriorate, becoming increasingly commercialised as the houses were sub-divided and converted into shops, lodgings and factories.1 At one stage, each of the seven apexes facing the column housed a pub, elsewhere there were woodcarvers, straw hat manufacturers, pork butchers, watch repairers, wigmakers and booksellers. The Woodyard Brewery was started in 1740 and during the next 100 years spread over most of the southern part of Seven Dials. By the middle of the 18th century, Seven Dials had declined to the extent that numerous incidents of mob violence were recorded and 39 night watchmen were needed to keep the peace. In the early 19th century, the area became famous as the most notorious rookery (slum) in London. Charles Dickens, in ‘Sketches of Boz’ (1839) wrote, ‘Where is there such another maze of streets, courts, lanes, and alleys? Where such a pure mixture of Englishmen and Irishmen, as in this complicated part of London? ... The stranger who finds himself in the Dials for the first time...at the entrance of Seven obscure passages, uncertain which to take, will see enough around him to keep his curiosity awake for no inconsiderable time…’ Dickens, in his role as vigorous social campaigner, drew his readers’ attention to the peculiar character of these streets again in 1842. He described buildings that were, ‘As ill-proportioned and deformed as the half-naked children that wallow there’, filthy-dirty shops for the purchase of rags and bones which vied in cleanliness with those frequented by the many bird-fanciers and rabbit-dealers (Punch Magazine, Jan-Jun 1842).

In the early twentieth century, when Agatha Christie set ‘The Seven Dials Mystery’ (1929) there, the area was still a byword for urban poverty, but by the 1970s things started to change. Covent Garden Market moved out and in 1974 Seven Dials was declared a Conservation Area with extensive restoration plans drawn up by the GLC. Although urban poverty: street homelessness and drug related crimes are still present; the area has now been turned into a prosperous, mainly fashion-focused shopping and commercial neighbourhood.

The sundial seen today is not the original, this was removed in 1773. Anecdotal evidence suggests that the pillar was pulled down by an angry mob, but recent research indicates that it was deliberately removed by the Paving Commissioners in an attempt to rid the area of ‘undesirables’. The remains were acquired by architect James Paine, who kept them at his house in Addlestone, Surrey until 1820 when they were purchased by public subscription and erected in Weybridge, as a memorial to the Duchess of York. Today’s replacement sundial column was constructed between 1988 and 1989, to the original design. It was unveiled by Queen Beatrix of the Netherlands, during her visit to commemorate the reign of William and Mary, during which the area was first developed.

The reconstruction of the Sundial Pillar was seen as a symbol of the regeneration of this area, a bold reminder to residents and visitors alike of Seven Dials’ physical character and its long-standing place in the heart of the City.