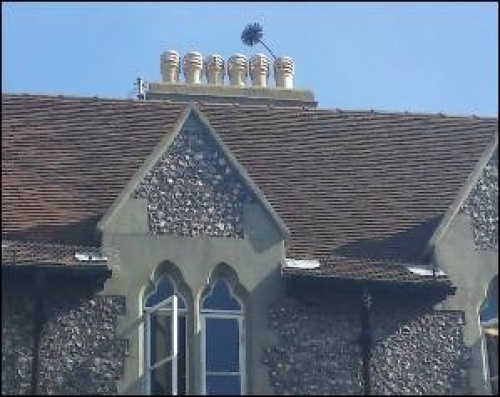 Picture courtesy of The Brighton Chimney Sweep. (Not for reproduction elsewhere.) Customers still like to see the brush coming out of the top of the chimney pot, it’s meant to be lucky, as is shaking a sweep’s hand, touching his shoulder and, the sweep’s favourite, kissing his cheek.

Does your chimney need sweeping? In the past, were you one of the many Brighton residents more likely to say ‘I need Wadeys’, rather than ‘I need a chimney sweep’?

Wadey Chimney Sweeps dominated the market in parts of Brighton for decades; their name and chimney sweeping were synonymous. They first appear on the 1861 census living at 7 Circus Street. Ten years later they were still at this address, but also had ‘Wadey’s Yard’. In 1931 William Wadey owned land, a soot store, yard and garage at 6 and 7 Circus Street, but by 1934 the firm was no longer listed and by 1937 all the properties on the eastern side of Circus Street, except Circus Street School, had been demolished and the Municipal Market built.

The Wadeys were not, however, the only Brighton family able to trace their chimney sweep ancestry back generations. From Sean Wilson, The Brighton Chimney Sweep, I learned that up until the 1970s there were many family firms and many ‘real characters’ in the trade. Sean joined the company when it was run by Stan Carey, a man born and brought up in Patcham and Hollingbury. Stan became a chimney sweep after he left the army in 1949 and was the first sweep in Brighton to offer the new and far less messy vacuum service.

Vacuum Chimney Sweeps, as they were called then, did very well as did the sweep John Marshall who, like the Wadeys, came from a long line of sweeps. Marshall Row was named after John, but he is probably best remembered as the chimney sweep who drove around Brighton on a motorbike with his brushes propped in the sidecar.

If John Marshall was the more mobile sweep his counterpart, with just a bicycle, was social activist, Harry Cowley (Cowley Drive and the Cowley Club were named in his honour). Born in 1890 in Lincoln Street, Harry claimed chimney sweeping as part of his CV. He, apparently, took the more local work whilst John Marshall took care of the chimneys further afield. And everyone had their chimneys swept, if they didn’t they could get into trouble. Sean Wilson remembers Stan Carey telling him stories about the local policeman visiting on a monthly basis with a long list of chimney fires in the area and Stan having to check his records against this list; if the chimney fires had occurred in a house that had not been swept and it was considered ‘neglect’ the occupants received a fine.

As early as the Georgian period it was appreciated that chimneys needed to be swept in order to avoid problems. Over time different cleaning methods were developed, leading up to the mechanical brushes and vacuums we know today, but there was one method that was popular for many years – the human brush or climbing boy.

Many started as young as four years old, although it was generally agreed that six was a good age to train a boy. Master sweeps took apprentices, mostly orphan boys but sometimes girls, from the workhouse and trained them to climb chimneys that could be as narrow as nine inches square. The apprentice’s job was to climb up the flue using his back, feet and knees and, with a flat brush and scraper, dislodge loose soot and any solid bits. If he got stuck or the master felt he needed ‘encouragement’ to climb faster a fire was lit in the hearth or another boy sent up behind the apprentice to prick pins into the soles of his feet or buttocks.

There was no safety clothing or safety regulations to protect the boys and they regularly got jammed in narrow flues, suffocated or burned to death; in addition, that is, to the other occupational hazards they suffered. A Parliamentary report of 1817 stated that climbing boys were subject to general neglect, stunted growth, deformity of the spine, legs and arms, inflammation of the eyelids leading to loss of sight and worst of all ‘Chimney Sweep’s Cancer’ - cancer of the scrotum - the first industrially related cancer to be found.

harles Kingsley’s 1863 novel The Water-Babies is credited with helping to raise public awareness of the gross mistreatment of these children through its central character, Tom, a young sweep who drowns while trying to escape from his evil master, Mr Grimes. Parliament responded in 1864 with an Act outlawing the use of children for climbing chimneys.

Despite being forced to adopt alternative methods of brushing chimneys, the Industrial Revolution and expansion of coal for domestic heating meant that chimney sweeps continued to flourish and, indeed, diversify. ‘Best soot’ that was obtained solely from coal fires was, before the widespread use of artificial fertilisers, highly prized. Sweeps like Wadeys in Circus Street sold soot to neighbours for their gardens, but mostly it went to farmers as a fertiliser for their cereal crops. (Today Sean gives his soot away to gardeners, allotment holders and several builders including a man who restores flint walls.)

In addition to the enterprising soot trade, chimney sweeps made extra money by attending weddings. Throughout the centuries chimney sweeps have been associated with good fortune (perhaps a tad galling for all those sweeps who died of testicular cancer!) and their presence at a wedding was thought to bring the couple good luck. This was a popular belief in Victorian times and is still upheld by some today. Another moneymaking custom was called ‘Jack in the Green’. The Brighton Herald, 3 May 1828, describes chimney sweeps parading the streets, dressed in a grotesque manner, dancing to wild music and carrying large green boughs, their aim to ‘levy contributions on the pockets of the charitable’.

Many of Brighton’s old, family sweeps worked until the 1970s, when gas replaced coal as the main source of domestic heating, and they were forced to hang up their brushes. (My thanks for Sean Wilson The Brighton Chimney Sweep, tele 01273 689414 www.thebrightonchimneysweep.co.uk for his help with this article.) 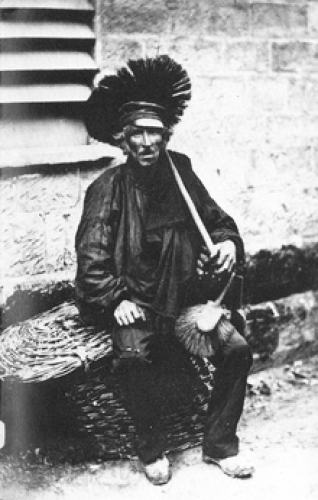 It was not uncommon for the householder to ask the sweep to leave a cup full of soot when he left to be used by the family to clean their teeth.

Chimney sweep Stan Carey found himself involved in a murder scene when he discovery the skeleton of a baby wrapped in cloth and lodged in the chimney of a large Regency-style house on Brighton seafront.