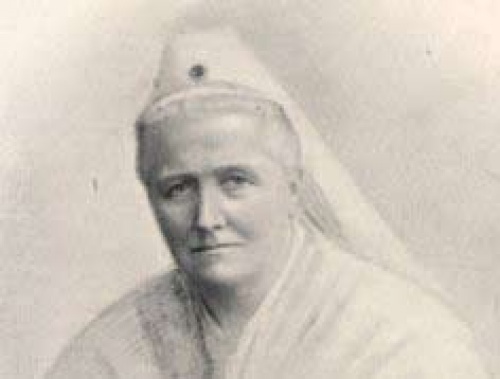 The first was Louisa Edwards, mother of ten children and wife of James Spicer, paper merchant. She was a committed Congregationalists and believer in religious and moral reforms. Her eldest daughter, Louisa, (1839-1914) became a suffragist and activist for women’s rights and her daughter, Louisa, (1872-1966) in turn became one of the world’s leading experts in obstetrics and gynaecology. Together, they made a big impact on the lives of women, especially those living in Brighton.

In 1871, at the age of 32, Louisa Spicer married William Martindale, a widower with four children. Their first child was born in Leytonstone on 30 October 1872. The second child, Mary, followed soon after and by the summer of 1874 a third (Hilda) was expected. Their marriage and happy family life was, however, short-lived. In early August 1874 Martindale became ill, then on 30 August their daughter Mary died. Louisa and William buried Mary on 4 September, the following day William collapsed and died.

A glimpse at this Louisa’s forceful and independent character is demonstrated in the decisions she made next. After the birth of Hilda, she moved first to Penzance then Germany and Switzerland, far away from her father and any patriarchal control he might wish to exert over her. The family returned to England in 1880 and took up residence in Lewes, where they stayed until it was time for young Louisa, known to her family as Lulu, and Hilda to start school.

Mrs Martindale had read Mary Wollstonecraft’s book A Vindication of the Rights of Women and agreed with Wollstonecraft that girls should have the same educational opportunities as boys. With this in mind, she tried to start her own school for girls in Lewes, but encountered so much opposition that she abandoned the project. The next best option was the Girls’ Public Day School Trust, which had recently opened a school in Montpelier Road, Brighton. Here classes were comparable to those in boys’ schools and the teaching staff were all professionally trained women. So in 1885 Mrs Martindale moved the family to 2 Lancaster Road and Louisa and Hilda were enrolled in Brighton High School for Girls.

Once settled in Brighton, Mrs Martindale became actively involved in local politics. Amongst other things, she was a prominent member of Brighton’s Women’s Co-operative Guild and helped start a Brighton branch of the Suffrage Society. Her home became the centre of the women’s movement in Sussex; on alternate Saturdays she opened her doors to working-class girls and frequently gave financial help to domestic servants, sales girls and foreign governesses. She also gave cooking utensils to young women about to be married. Another role Mrs Martindale undertook was President of the Lewes Road Dispensary for Women and Children at 145 Islingword Road, an establishment that became central to her daughter, Louisa’s, work. Louisa Martindale’s (1872-1966) interests also concentrated on improving the lives of women, but they were sometimes considered controversial, most particularly those concerning prostitution and venereal disease. Indeed, members of the House of Commons branded a pamphlet she wrote on prostitution obscene.

In 1906 Louisa gained her M.D. in London and returned to Brighton to start a practice at 10 Marlborough Place. A year later she joined the staff at the Lewes Road Dispensary, whose stated aim was: To afford to poor women of Brighton…the opportunity of free consultation with doctors of their own sex. In 1911 the Dispensary (now called the Lady Chichester Hospital and Dispensary) moved to 4-8 Ditchling Road and included a small medical and surgical hospital. Later this was renamed the New Sussex Hospital for Women and moved to Windlesham Road, Hove. During WW1 Dr Martindale served at the Scottish Women’s Hospital at Royaumont Abbey in France.

By the 1930s Dr Martindale was considered one of the world’s leading experts in her field and was awarded the CBE in 1931. She worked as a surgeon in London during WWII and retired from practice in 1947. Never marrying she lived happily with Ismay Fitzgerald: ... I invited her to stay for a fortnight, with the result that she stayed 35 years. Of her own life she added: I have had my full share of love and happiness.