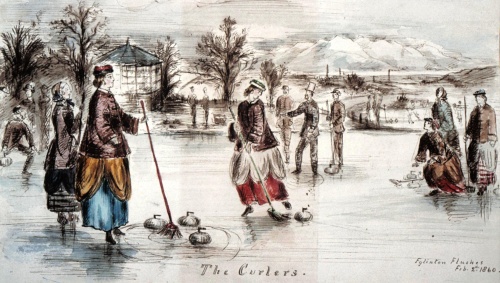 Now, in the depths of winter, we can enjoy seasonal outdoor activities. Festive ice-skating rinks are open to the public at the Royal Pavilion, Brighton and at other picturesque venues, while the dazzling slopes of ski and snowboarding resorts beckon energetic holiday-makers. Expertise in traversing the ice and snow are nothing new: for millennia, the inhabitants of cold climates have had to negotiate snowy landscapes and frozen wastes in order to survive; but in recent centuries what were once essential skills have evolved into pleasurable leisure pursuits and serious competitive sports.

Archaeological evidence demonstrates that skiing first evolved in Northern Europe and Asia around 4,500-5,000 years ago, the earliest skis made of animal bone used for crossing relatively flat slopes. During the 17th century skis were widely used by the Northern European military and by the mid-1700s Scandinavian armies were engaging in ski exercises and cross-country and downhill races. The first public skiing competition and ‘ski tour’ occurred in Norway in 1843 and in 1849 respectively and ski clubs were formed in Scandinavia, Australia and North America during the 1860s and early 1870s. Mountain resorts became viable destinations once city-dwellers could reach them by train in winter, while more advanced equipment encouraged the pastime - lighter, faster and more flexible cambered skis for smoother manoeuvres and improved bindings and boots.

Skiing was a fashionable pursuit amongst privileged Victorians and Edwardians. Holidays to Switzerland first found favour with the aristocracy following a winter tourist visit to St Moritz in 1864, the Alps developing into an elite winter playground. In 1903 the first packaged ski holidays to Switzerland were organised by Sir Henry Lunn, founder of Lunn Poly (now Thomson). Sadly, images of early skiers are rare: one 1890s photograph depicts a female wearing a Tam-o’-Shanter cap, blouse with fashionable puffed ‘leg-o’-mutton’ sleeves and sturdy calf-length skirt, while her male companion sports a round cap, knee breeches and comfortable woollen jersey. Evidently the first Norwegian ski-jumping ladies’ teams of the 1890s struggled to balance modesty with functionality: some wore calf-length skirts and trousers tucked into their boots.

Ideally ski wear should be water-resistant, and some early skiers may have trialled new protective gear. Outdoor clothing company Burberry (established 1856), were pioneers of weatherproof fabrics and first developed gabardine in 1880 – a hardwearing, water-resistant yet ‘breathable’ material in which the yarn was waterproofed before weaving. By the 1910s, when comfortable knitwear was becoming popular for sports and leisure activities, a substantial jersey, thick calf-length skirt or breeches, stout leather boots and warm accessories were usual, some pioneering women already donning breeches or jodhpurs. By the 1920s, ski schools were opening in Switzerland and Austria and the middle classes were taking Alpine holidays. As skiing generated more interest, magazines displayed alluring adverts, for example Burberry’s weatherproof gabardine ski suits fashioned in bright, highly-visible colours. Over time ski wear grew more stylish and, whether purchased or hired, was part of the fashionable winter wardrobe by the 1960s, when skiing extended to a wider market.

Evidence suggests that Northern European man first used rudimentary skates 3,000-4,000 years ago - sharpened, flattened pieces of animal leg bone strapped beneath the foot, enabling the wearer to glide on top of the ice. What may be the earliest written account of ice skating, by William Fitzstephen in the 1100s, records young men larking around on frozen marshland just outside the walls of the City of London. Skates of horse or other animal bone were pierced and a thong threaded through, strapping the skates to the boot or shoe, the skaters propelling themselves along at speed, using sticks. In the 13th or 14th centuries the invention of iron skates with sharpened edges that allowed the metal runners to grip and pierce the ice heralded the dawn of modern skating.

During the Civil War the royal family learned to skate while exiled in Holland and after the Restoration (1660), a skating display was staged in London. The hard frost of 1662 inspired skating on the new canal in St James’s Park and later, at the Great Frost Fair of 1683-4, many enjoyed sledging and ice skating on the River Thames. As severe winters continued, skating grew increasingly popular and in 1742 (or 1744) the world’s first ice-skating club was formed, The Edinburgh Skating Club, followed by The Skating Club in London (1830).

Although some ladies accompanied men, in the early 1800s ice-skating was still a male-dominated recreation. Skaters wore regular winter clothing, although some writers addressed the issue more seriously. Donald Walker in Manly Exercises (1840) recommended that dress be close-fitting and simple and that loose trousers and bulky greatcoats be avoided, to minimise accidents. He also advised skaters to wear ‘flannel next the chest, shoulders and loins’ to prevent ‘the evils caused by sudden chills in cold weather’. Later publications agreed that clothing should not flap about, but be well-fitted. Great emphasis was placed on the fit of boots and various styles were trialled, while the design of skates also advanced. Until the mid-1800s skate blades generally curved up over the toe, this prominent ‘fender’ becoming less common after the 1860s.

During the 1910s, figure-skating became more athletic and higher sporting performance was achieved. Simpler, streamlined clothing made a significant difference to female skaters, previously hindered by long, hampering garments. Ice-skating surged in popularity between the wars, as evidenced by the opening of many public rinks. An influential role model was Norway’s Sonja Henie, who won several world championships between 1927 and 1936. Henie defied convention by wearing a flared knee-length skirt for her famed elegant, fluid figure-skating routines and is credited with introducing short hemlines and white skating boots. Undoubtedly she helped to pioneer modern garments, for short flared and pleated skirts became fashionable for ice-skating, teamed with bright knitted sweaters and accessories. By the 1930s new artificial fabrics also came into use, accessorised with glamorous flesh-coloured nylon hose. Plus fours were the male sporting garment of the 1920s-1940s, worn for skating with patterned socks, boots and jazzy Fair Isle knitwear. 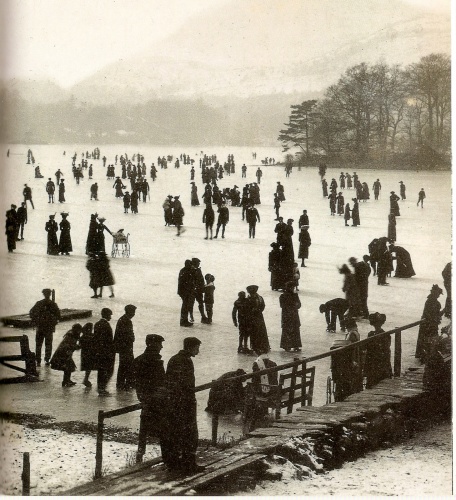