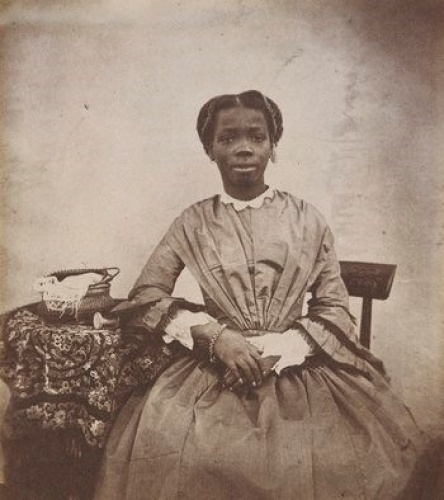 Sarah was described by Captain Forbes as possessing “intelligence of no common order”. He wrote: She is far in advance of any white child of her age, in aptness of learning, and strength of mind and affection”. Photograph - Royal Collection Trust rct.uk

The story of Sarah Forbes Bonetta is one many people are familiar with – the child princess sold into slavery who, through a remarkable twist of events, was liberated and became the goddaughter of Queen Victoria – but her connection to Brighton is perhaps another, less well known, twist.

Originally named Omoba Aina, she was born into a Royal West African dynasty, a Egbado princess of the Yoruba people. At the age of five she was caught up in an intertribal war - described by contemporary sources as a “dreadful slave-hunt” and an event that changed her life forever.

In 1848, King Gezo of Dahomy sent a raiding party to the city of Okeadon where Sarah and her family lived, many of the inhabitants were sacrificed, the rest were led away into slavery. The sale of such slaves was common practice throughout Western and West Central Africa at that time; victors in the battles that raged between tribes and states within African society viewed slaves as a lucrative ‘by-product’ and a means of financing future conflicts.

The fate of Aina’s brother and sisters is unknown, but her parents were killed during the attack. However, as the daughter of an African chief, she was spared: kept in captivity as a state prisoner. King Gezo’s plan was to either present her to an important visitor, or to sacrifice her at the death of an official so that she become his attendant in the next world.

Miraculously, shortly before Aina was due to be sacrificed, she was saved by Captain Frederick E. Forbes of the Royal Navy. Captain Forbes arrived in Dahomey, on board the HMS Bonetta, in June 1850, his mission was to negotiate the suppression of the slave trade. While there he became aware of the plight of the little princess and diplomatically suggested to King Gezo that she be offered as a present to Queen Victoria, “from the King of the Blacks to the Queen of the Whites”; a “gift” from one royal family to another.

Captain Forbes wrote in his journal: “I have only to add a few particulars about my extraordinary present ‘the African Child’ – It is usual to reserve the best born for the high behest of royalty and the immolation on the tombs of the deceased nobility. For one of these ends she has been detained at court for two years, proving, by her not having been sold to slave dealers, that she was of good family”. The request was granted and Aina, now renamed Sarah Forbes Bonetta, after the Captain and his ship, was transported to England. At first, Sarah lived with Captain Forbes’s family. Then, on the 9th November 1850, she was taken to Windsor Castle and presented to Queen Victoria and Prince Albert. The Queen was so impressed by the girl’s natural regal manner and obvious intelligence that she granted her an allowance and agreed to pay for her further education with the Church Missionary Society.

Growing up, Sarah spent a lot of time visiting the royal household and was close friends with Queen Victoria’s daughter Princess Alice. The Queen continued to follow Sarah’s achievements with interest. In her diary she wrote: “After luncheon Sally [Sarah] Bonita [Bonetta], the little African girl came with Mrs Phipps, & showed me some of her work.”

Sarah spoke English well and had a great talent for art and music, but her studies were disturbed by a persistent cough which was attributed to the British climate. In May 1851, in a bid to improve her fragile health, Sarah’s guardians sent her back to Africa where she attended the Female Institution in Freetown, Sierra Leone.

Four years later, when Sarah was 12 years old, Queen Victoria commanded that she return so that she could be raised within British middle-class society, under the charge of a Mr and Mrs Schon who resided in Chatham.

When Sarah reached the age of 18 she received a proposal from James Pinson Labulo Davies, a 31-year-old, wealthy businessman from Lagos. Sarah initially rejected his offer and it is reported that, in order to persuade her to accept, she was sent to live with two elderly ladies in Brighton whose house she described as a “desolate little pig sty”. Unhappy with the situation, but no doubt fully aware that women in Victorian society had little choice but to marry, she eventually accepted the offer.

Queen Victoria granted the necessary permission for the marriage which was to take place in Brighton’s original parish church, St Nicholas’ on Dyke Road in August 1862. Sarah stayed in Brighton to make all the necessary preparations for what was to be the high society wedding of the year, an event like no other Brighton had seen.

In the week leading up to the big day, the press gave a great deal of coverage to the idea of a Royal Wedding in Brighton, creating huge local interest, so much so that on the day the whole town turned up to watch; people stood on walls, perched in trees and jostled for position. Indeed, the crowd around the church was so enormous that the wedding party could not gain access. In desperation, the Vicar had to call for the Constable to come and clear the way so that the ceremony could proceed.

The wedding party made up of “White ladies with African gentlemen, and African ladies with White gentlemen”, arrived from West Hill Lodge, in ten carriages and pairs of grays. Sarah was accompanied by sixteen bridesmaids, eight of them Black and eight of them White. (www.blackhistorymonth.org.uk/)
Following the wedding, the couple lived for a short time in Seven Dials, at 17 Clifton Hill, then moved to Africa. Sarah and James set up home in Lagos and had three children: Victoria, who also became Queen Victoria’s goddaughter, was born in 1863, followed by Arthur in 1871 and Stella in 1873.

Sadly, the cough that had plagued Sarah through her young life continued and she was eventually diagnosed with tuberculosis and sent to convalesce in Madeira off the coast of West Africa. Sarah died on the 15th August 1880 and is buried in the British cemetery in Funchal, Madeira.

Her husband erected an eight foot high granite obelisk-shaped monument in her memory at Ijon in Western Lagos. The inscription reads: In memory of Princess Sarah Forbes Bonetta. Wife of the Hon J P L Davies who departed this life at Madeira August 15th 1880. Aged 37 years.

Her epitaph could so easily have read: In her life, cut short by tuberculosis, she summoned strength and dignity in difficult times. 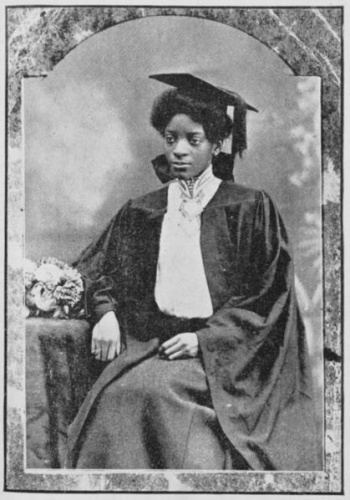 Before her marriage Sarah trained as a teacher, but understood it was necessary to make a suitable marriage that would then become her ‘life’s work’. Photograph - The Guardian, Nigeria. 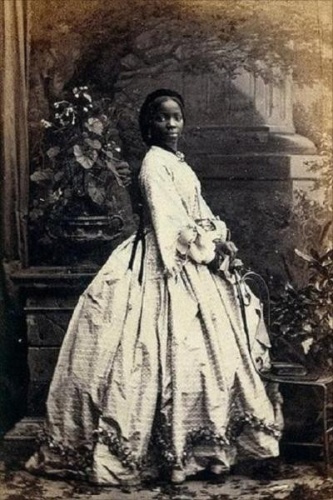 Sarah Forbes Bonetta. This photo is one of several taken by portrait photographer Camille Silvy to mark Sarah’s wedding in 1862 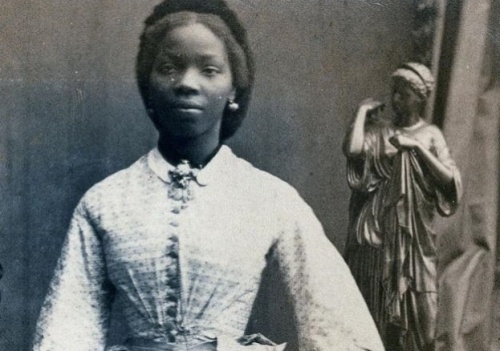 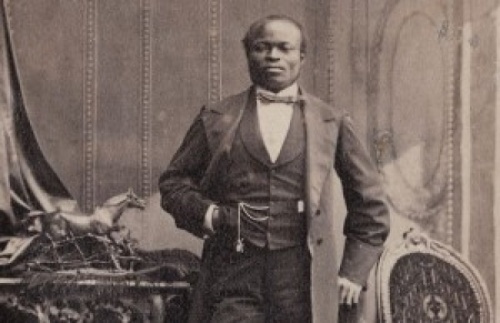 Portrait photograph of James Pinson Labulo Davies, taken by Camille Silvy, 1862. Captain JPL Davies, pioneered cocoa farming in West Africa and is described in literature as the most colourful Lagosian of his time. 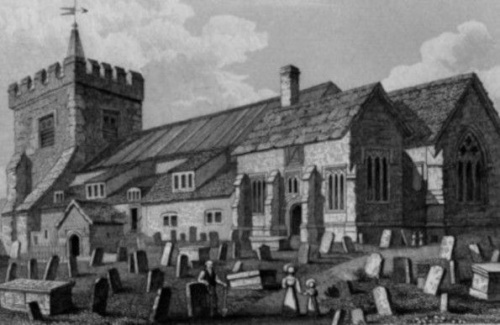 St Nicholas Church the site of Sarah’s wedding. Today it is the oldest surviving building in Brighton www.stnicholasbrighton.org.uk 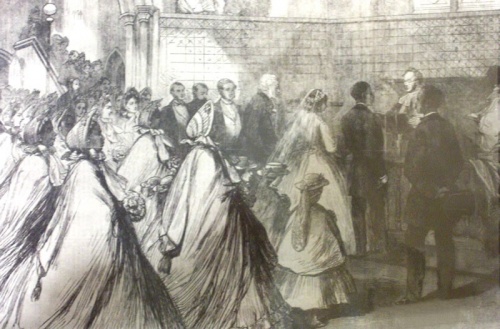 Details of the extravagant wedding were publicised in the Illustrated London News (23 August 1862) and The Times (15 August 1862). The wedding service was conducted by Rev Henry Venn who was the honorary secretary of the Christian Missionary Society in London. Image - Black-history.org.uk 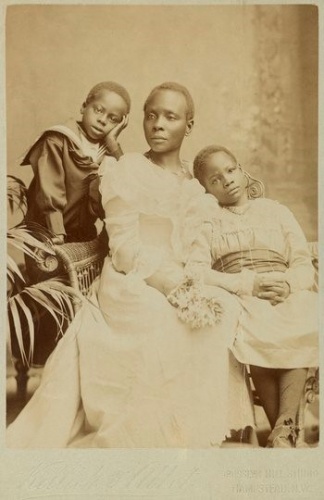 Sarah and two of her children. Queen Victoria was so proud of Sarah’s daughter, Victoria, that when she passed her music examination, teachers and children were granted one day’s holiday. Photograph - Sacco.org.uk 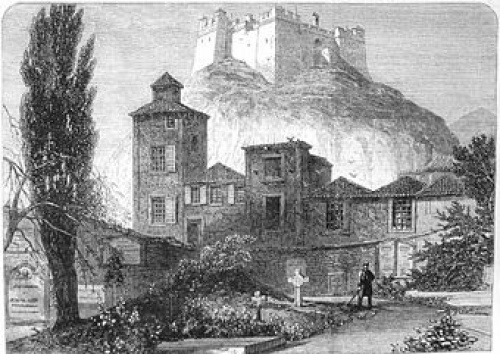 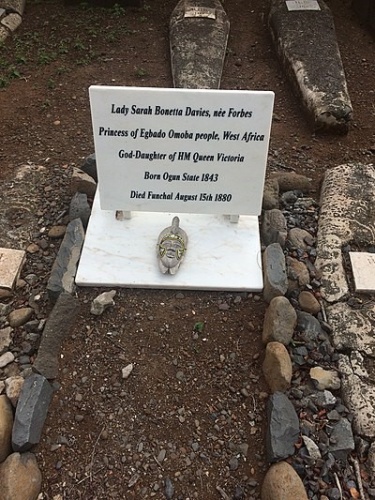 Sarah’s grave in the British cemetery in Funchal, Madeira. A unique and admired figure in history, she spent her life between the British royal household and her homeland in Africa. Photograph - en.wikipedia.org 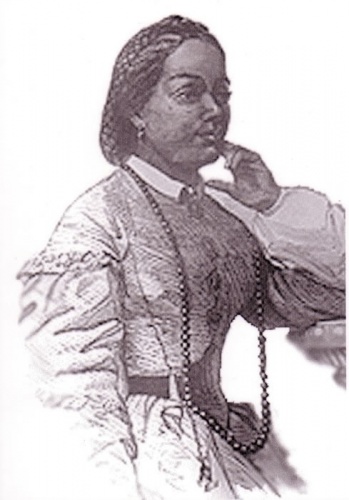 Queen Victoria thought so much of Sarah that she was one of only two Lagos dignitaries the Royal Navy had standing orders to evacuate in the event of an uprising in Lagos. Image - Black-history.org.uk 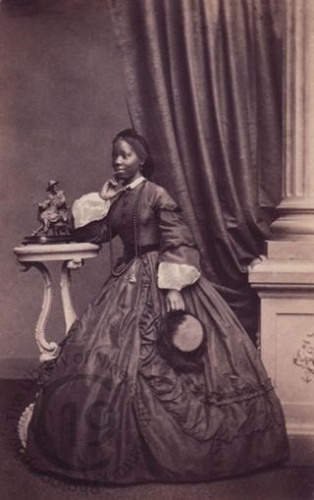 Sarah Forbes Bonetta. Portrait photograph by Camille Silvy, 1862. Captain Forbes wrote in his journal: Of her own history she only has a confused idea. Her parents were decapitated; her brother and sisters she knows not what their fate might have been.