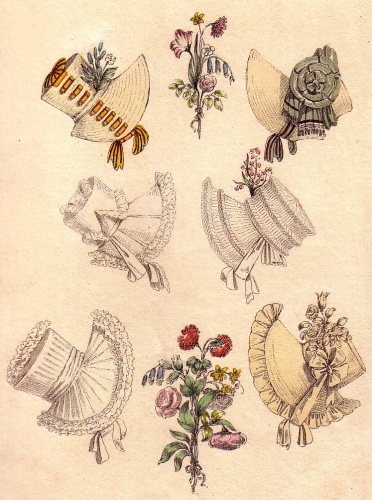 The arrival of spring always brings a renewed excitement about clothing and fashion as evidenced by Easter Bonnet Parades, so it seems the ideal time to look back and take inspiration from some of the more extravagant headwear from the past.

Headdresses have been worn since time immemorial, but only in the late eighteenth century did hats become a major feature of female high fashion and the art of millinery evolve. The term ‘milliner’ derives from Milan and originally denoted a supplier of fancy goods such as hats, gloves, haberdashery and other decorative items for which the Italian city was renowned, but from the 1760s onwards milliners ceased to be simply purveyors of trimmings and accessories and became recognised arbiters of fashion, actually creating caps, embellishing hats and bonnets and devising novel dress ornaments. In their skilled hands, frivolity and fantasy entered women’s fashion in the late Georgian period, inspiring the millinery creations of later eras.

During the 1770s-1790s, female hats and headdresses underwent rapid transformations, fuelled by new regular illustrated fashion magazines. The tall powdered ‘macaroni’ hairstyles of the 1770s posed a challenge, encouraging extreme modes such as a sailing ship perched atop the towering toupée and extravagant creations involving loops of pearls, silk ribbons, lace, tassels, feathers and garlands of flowers and greenery. By the 1780s wider frizzed hairstyles were counterbalanced by enormous wide-brimmed hats ornamented with ribbons and feathers (think Keira Knightly in The Duchess, the 2008 film chronicling the life of the stylish Georgiana Cavendish, Duchess of Devonshire). In the later 1790s and early 1800s neo-classical fashions favoured high-waisted muslin gowns and new hairstyles and headdresses - tumbling ‘antique’ curls accessorised with bandeaux and turban-style caps set off by waving dyed ostrich plumes. The visual effect was striking, but already, with demand escalating for fashionable feathers, wild ostriches were being hunted to near extinction.

By the 1810s as the pure neo-classical line waned, dress became more complex and fanciful. The ongoing war with France inspired various military, helmet-like caps and bonnets, while interest in historical styles found expression in quasi-Tudor velvet and satin ostrich feather-trimmed hats. Following peace with France in 1815, formal tall styles were fashionable, and bonnets with wired, upturned brims, ornamented with ribbon rosettes, pert bows, frills and sprigs of picturesque flowers. Some of history’s most exaggerated headwear was devised during the 1820s and early 1830s, reflecting dramatic Romantic aesthetic taste. Bonnet brims widened to accommodate masses of curls around the face and hats gained extraordinarily wide brims: these vast edifices bore exuberant decoration including loops of wide wired ribbon, piped rouleaux of fabric, ribbons left hanging like streamers and sprays or even whole branches of ornamental shrubs like peonies, hydrangeas and magnolia – floral species familiar today, but then newly-introduced into Britain, following expeditions to the East.

Early-Victorian headwear was relatively restrained and close-fitting poke bonnets shielded the face. Trimmings usually followed the drooping lines of fashionable hairstyles – floral sprigs or the distinctive weeping plumage of the male bird of paradise, beginning a new phase in the use of feathers, specifically from exotic newly-‘discovered’ species. By the late 1850s and early 1860s hats were returning to fashion, providing a more solid base for decoration. Neat round hats were often trimmed with ostrich feather tips or a bird’s wing, or were circled with feathers, a precursor to more extensive use of birds’ plumage in millinery. In fact this heralded the era now recognised as the most destructive for the world’s bird population – the years broadly spanning 1860 until 1921. Just as mid-Victorian fashion was accelerating and exhibiting a growing desire for display and novelty, colonial expansion across the globe and exploration of distant lands introduced new, exotic natural specimens to European markets. These included previously unknown varieties of birds, fuelling the fashionable demand for plumage to decorate hats and other dress articles. To the wings of numerous native British birds such as gulls, egrets, herons, finches and jays (to name but a few) were now added a vibrant array of feathers and body parts of exquisite and rare species of bird including the humming bird, lyrebird, and bird of paradise.

During the 1870s as hairstyles grew tall and ornate, hats had to accommodate a lady’s coiffure and were either small, tilted forward in the ‘postillion’ style, or sat further back. Diverse trimmings ranged from intricately-sculpted fabric folds and prettily-arranged ribbons to feminine floral and feather creations. Hats of the early 1880s focused on fabric and shape and new round styles and brimless toques were launched. From c.1885-90, hat crowns grew extremely tall, offering a generous display area and inspiring bizarre trends in late-Victorian millinery. Towering confections of ribbons, net and lace were favoured by older ladies and for bridal wear, while more ingenious but less wholesome was the vogue for organic and natural materials that, in extreme cases, produced arrangements of stuffed mice and reptiles, leaves, twigs and grass – a contrived miniature habitat on the head. Reflecting the gruesome taste for dead creatures, often entire stuffed birds were perched upright on a hat, or posed on springs with wings outstretched, emulating flight. By now conservationists were seriously concerned about the destruction of birds worldwide: for more on this subject, see my guest blog on The Victorianist website – http://thevictorianist.blogspot.co.uk/2011/09/members-shall-discourage-wanton.html

Turn-of-century fashion favoured continued extravagance and frivolous arrangements of bows, flowers, lace and feathers were heaped onto formal plate-like hats. Some of the largest headwear was created in the late Edwardian era - vast, Titanic-era hats trimmed with artificial flowers, satin bows and sweeping osprey plumes. After the First World War, hats were still important, but as fashion modernised everyday styles grew plainer. During the 1930s under Surrealist influence some quirky hat shapes emerged and in the Second World War jaunty hats and turban-style headscarves enlivened otherwise drab-seeming Utility outfits. But afterwards hat-wearing declined and ornamental hats became largely confined to weddings, social events such as the races and of course the annual Easter Bonnet Parade. 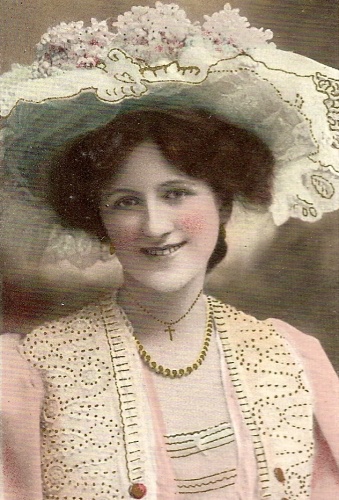 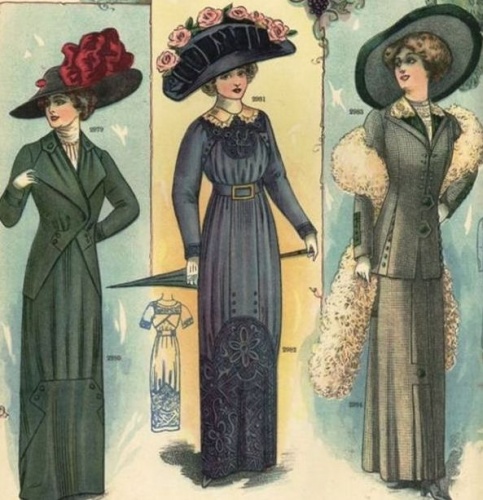 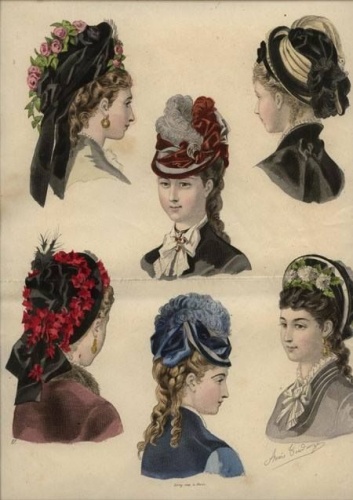