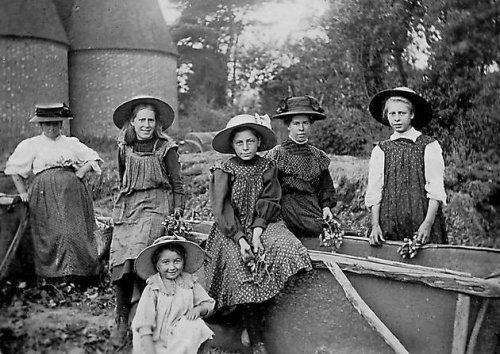 Hop-growing was a thriving industry in Kent employing thousands of workers. In its heyday between 1860 and 1880 over 46,600 acres of Kent land were given over to hop cultivation. In 1906 two thirds of all hops grown in England came from Kent.

For many women, September is ‘hopping time’; the coming of autumn, the time when they, their mothers and grandmothers made the annual journey to Kent. It is now just a fond memory held by a diminishing few, but nevertheless a marker in the year that is not forgotten.

The special place hop-picking holds in the lives of these women is well documented, but what is not so well known is that Brightonians, as well as Londoners, made this annual pilgrimage. There seems to be no single reason why so many uprooted their families and moved to the country every September and, of course, these reasons changed over time, but most saw hop-picking as a holiday or a source of extra cash. Others might have said hopping provided a legitimate reason to be away from their husbands or, during the war, the bombing.

Mothers looked on the fresh air of the Kent countryside as an important boost to their children’s health. Their kids could be built up to make them strong enough to withstand the coming winter. Although, this argument was probably more relevant to families from the East End, rather than the seaside town of Brighton.

One Brighton woman, that I was lucky enough to talk to about hop-picking, used to live on the Manor Farm Estate and she, her parents and three siblings went every year to Spelmonden Farm in Goudhurst. Patsy Beacham (nee Weaver) remembers, from about the age of nine, an open back lorry arriving early in the morning and picking up families from the estate. Often the lorry belonged to Mears, the greengrocers who, at the time, had a stall in the market. Like everyone else Patsy’s mum loaded on a large “hopping box” in which she had saved bags of flour, sugar, tea etc. to keep them going during their six weeks away.

At the end of the 1940s/early 1950s, Mrs Weaver understood the need to be organised and prepared. Aside from the issue of continuing rationing, a trip to the shop involved a long walk down country lanes and, in any case, she wanted to keep her hop-picking wages to buy winter clothes and help pay for the coming Christmas.

I am sure that all the children were happy to have extra time off school, but an article in the Sussex County Magazine, from 1953, suggests that not all adults were as keen on the idea. Brighton educationalists were clearly concerned about hop-picking, but were by no means unanimous on the point of whether a “healthy holiday” outweighed the loss of schooling. Some thought that the problem did not warrant the Education Committee getting involved in “the freedom of the parents” others expressed condemnation of what they regarded as “sweated labour”. They did, however, agree that parents should be advised that they risked prosecution if they kept their children away from school longer than the two weeks permitted.

The log from Brighton’s Circus Street School demonstrates that taking children out of school was nothing new: “2 Sept 1901 – 15 girls were away hopping; 20 Sept 1901 – 12 girls absent through hopping; 4 Oct 1901 – the attendance has greatly improved this week. Most of the hoppers have now returned.”

But it wasn’t all a holiday. As George Orwell commented in A Clergyman’s Daughter, the pleasures of hop-picking are far from obvious, the reality being completely at odds with the nostalgic way many hop-pickers remember their experience. The pay was low, the hours were long and the work was tedious and very unpleasant when it rained.

Nostalgic idealisation of hop-picking can also gloss over the resentment and sometimes hostility that existed between the ‘foreigners/outsiders’ and home or local pickers. Patsy experienced hop-picking as both a child and an adult and could honestly say that she had no memory of such tensions. My mother, Gwenyth Davies, on the other hand, experienced first-hand the impact of the annual ‘invasion’ on the small rural community where she lived. Generations of my family were home pickers, including myself as a child; we worked on Piper’s Farm in Conghurst, where hop-pickers from Brighton were employed and where the farmer maintained strict segregation between the Brightonians and the local workers. And, as Gwenyth will tell you, at length if given the chance, the distinction between the foreigners and local pickers could be characterised by fear and distrust.

Pubs, especially those near large hop gardens where hundreds of casual workers were employed, were known to display signs saying “No Hoppers” and sometimes “No Gypsies”. The pub in our village would only serve Brighton pickers through a hatch, allowing them to sit outside, but keeping them segregated from the locals inside. Shopkeepers, anxious about the stereo-typical light fingered foreigners, put chicken wire up over their stock or only served the Brighton hoppers through a window.

But, happily, this was not everyone’s experience. Many hop-pickers went year after year to the same farm and the farmers knew and respected them and their families. My husband’s grandfather managed Bockingfold Manor Farm in Goudhurst and, in a paternalistic way, he was always concerned about ‘his’ pickers. Every Sunday he went, with his bible, down the rows of hopper huts to preach to anyone who would listen. Odd behaviour you might think, but from the middle of the 19th century onwards, it was quite common for zealous missionaries to consider hop-pickers as a captive, open-air congregation in need of an ‘improving’ sermon!

The memories Patsy, from Brighton, and Gwenyth, from Sandhurst, have differ in some respects, but without a moment’s hesitation, both women would say the time spent in the hop gardens was the best of their lives. Asked to say why, it was being with family and friends; the taste of tea made with water boiled in a billycan over the fire; sandwiches eaten with hop stained hands. It was, however, the freedom hop-picking offered them that they will remember most fondly this September. My thanks to Patsy Beacham and Gwenyth Davies for their time and their memories. 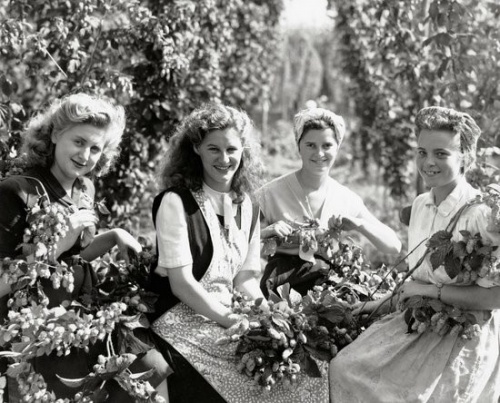 Hop picking in Kent c1950s. Until the early 1960s, when machine picking became widespread, there were so few changes in methods of hop cultivation that the 1850 season would have been almost indistinguishable from that of 1950. 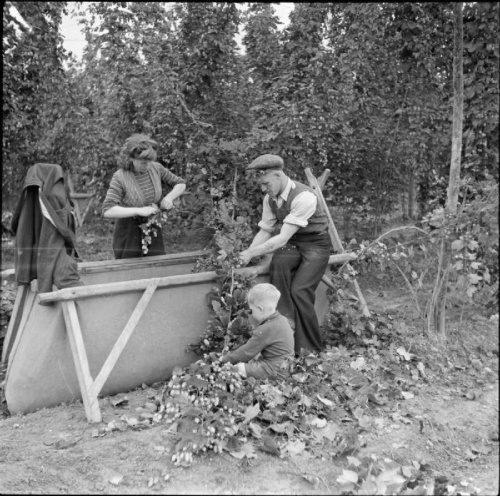 Yalding Kent, c1947. Hops were grown in many parts of England, but it was the comparatively close Kent farms which attracted the London the Brighton pickers. It has been estimated that, while hand picking was still the main method of gathering hops, between one hundred thousand and a quarter of a million people made the journey to go hopping.