I love to go A-Wandering... 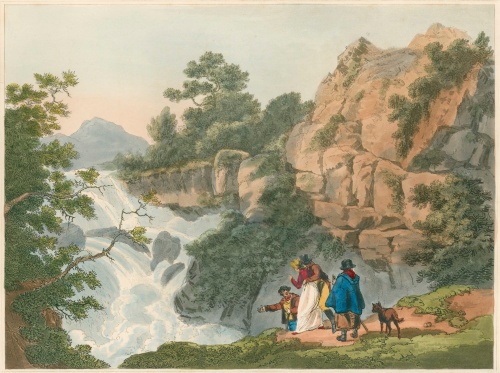 The country walks that we enjoy today are possible because earlier generations championed the natural landscape, establishing our ‘right to roam’. Historically, walking and rambling gradually evolved from a niche pastime into a widespread activity, the recent pandemic highlighting more than ever the benefits of fresh air and outdoor exercise.

Three centuries ago anyone tramping through field and forest usually either owned the land, or worked on it, the idea of recreational walking virtually unknown. However humans’ relationship with the environment shifted during the late-1700s and 1800s. Magnificent, awe-inspiring scenery – soaring mountain peaks, deep forests, rugged ravines and thundering rivers inspired Romantic poets William Wordsworth, Samuel Taylor Coleridge and other writers seeking the sublime in the natural world. Victorian authors like Thomas Hardy, deeply attached to their rural surroundings, placed their novels in bucolic settings that still inform walkers’ routes in southern England today. Atmospheric scenes by artists including JMW Turner and John Constable elevated English landscape painting and inspired a new generation of tourists to visit the picturesque locations first admired on canvas.

Romantic literature and art coincided with the Industrial Revolution when fast-growing urban centres brought the adjacent countryside into sharper focus. The relentless clamour, smoke pollution and grim squalor of expanding towns and cities provoked a powerful response from slum dwellers - a yearning for more tranquil, restorative surroundings, fresh air and wide horizons. Consequently, during the early-1800s recreational walking grew customary among mill and factory workers from northern manufacturing hubs like Manchester, York, Leeds and Glasgow – all within reach of nearby pastures. In 1824 the Association for the Protection of Ancient Footpaths in the Vicinity of York was formed, followed in 1826 by the Manchester Association for the Preservation of Ancient Footpaths. These pioneering organisations aimed to secure convenient walking routes for workers depleted by city life and were the first to try to preserve the natural landscape for human use.

Energetic walking provided invigorating physical exercise and mental liberation from daily routine, as well as a chance for intellectual and social improvement. Many Victorian enthusiasts learned much by exploring the open landscape on foot, becoming self-educated through their rambles, even acknowledged experts in geology and botany. Typically, there was a seriousness and sobriety about walking, with Congregationalist church and temperance groups even forming their own walking clubs. Hearty expeditions into the countryside implied a rejection of ‘vulgar’ urban entertainments like rowdy music halls and taverns. Walkers were generally interested in the world around them and, freed from everyday trappings to roam moor and mountain, valued their independence of thought. Some club members were firm advocates of social progress, like GHB Ward, founder of the Sheffield Clarion Ramblers in 1900, who eventually became prominent in the Labour Party and a key walkers’ rights activist.

The history of popular rambling in Britain chimes with the wider story of social conflict. Since the 1700s successive Parliamentary Enclosure Acts had been carving up the land on which rural communities traditionally lived and worked: as areas once considered common land were claimed by aristocratic estate owners and the rural gentry, new boundary fences, hedges and stone walls formed physical barriers - a process that also reflected changing agricultural practices. Disputes arose over access to the many ancient footpaths that criss-crossed the land. Just when urban populations were soaring and nature beckoned, guns, lethal traps and threatening notices deterred townspeople and walkers from entering woods and pastures, restricting public use of time-honoured rights of way through the countryside.

As outlined earlier, northern towns pioneered early footpath preservation societies and in 1833 a Select Committee on Public Walks was formed. Yet confrontations between local people, keen walkers and the authorities continued, rural landlords determined to keep labourers and other ‘trespassers’ off their private property, while farmers feared damage to their fields. Even public works like municipal water boards, concerned about reservoir pollution, restricted access to surrounding areas. With land ownership and freedom of use becoming a battleground, ‘Trespassers will be prosecuted’ signs were familiar well into the last century.

Nonetheless after the Great War, rambling in Britain progressed and in 1931 the newly-established National Council of Ramblers’ Federations welcomed walking group members nationwide. In 1932 there occurred a major clash between walkers and landowners known as the Mass Trespass of Kinder Scout moorland, the spot marking the start of the 272-mile Pennine Way. A pivotal moment in the dispute over access to traditional footpaths, the aftermath brought widespread support for ramblers and walking as a hobby. The Government had been considering nationalising swathes of land since the 1920s, to allocate free areas for everyone’s use. In 1949 the National Parks and Access to the Countryside Act was passed, creating a legal blueprint for future parks and specifying ease of access from major population centres.

Developments favouring walkers’ rights of way dovetailed with a pronounced interest in the outdoors between the wars. Inspired by contemporary writers nostalgic for their rural childhood experiences, and a growing cult of health and fitness, fresh country air and open-air exercise were attracting new generations of walkers. An energetic hiker might cover 30 or more miles on a summer’s day: walking not only promoted strength and stamina, but also a slender, athletic form: the new physical ideal. Gaining a suntan was also growing fashionable, and more relaxed leisure wear was designed to free and expose limbs. During the 1930s younger hikers adopted shorts for the first time, open-necked short-sleeved shirts and comfortable jerseys or loose jackets – practical separates perfect for walking weekends.

Short trips could be extended by pitching a tent or staying overnight in Bed & Breakfast accommodation. In 1930 the Youth Hostels Association (YHA) was established: “To help all, but especially young people, to a greater knowledge, use and love of the countryside, particularly by providing hostels or other accommodation for them on their travels.” Train travel remained convenient until the Beeching cuts of the 1960s closed many country stations, but by then more people were driving their own motor cars. Provisions and local maps were available from village shops, new-style Ordnance Survey maps and modern walking guides in high demand.

In April 1951 the Peak District was inaugurated as Britain’s first national park, while closer to home, our glorious South Downs became Britain’s newest in April 2010. Walkers now have unprecedented freedom to roam, around one-third of Britons reportedly enjoying regular country walks today. Whether for exercise, love of nature or social interaction with like-minded companions, we are also following ancient lanes and footpaths, revisiting our shared rural past.