New Road – One of the Most Popular Places in the City 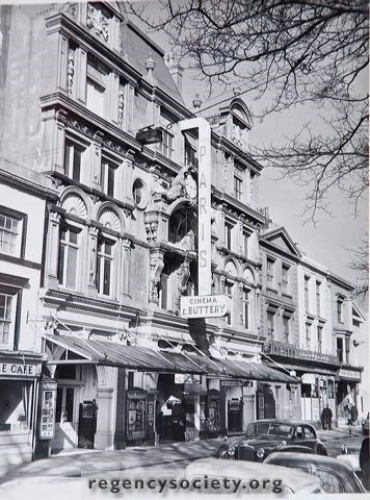 Photograph courtesy of the Regency Society. The Paris Cinema. Built in 1893 as a theatre. Photograph dated 2 March 1963, taken just before the building was sold for subsequent demolition.

In May I wrote about the Brighton Unitarian Church and, whilst doing my research, stumbled upon some interesting stories about the construction and history of New Road. It is now one of the most popular places to visit in the City, but it started as just a small part of the Prince Regent’s convoluted plan to form an enclosed estate around the Pavilion.

To achieve his goal, the Prince had to purchase, or somehow acquire, the land surrounding the Pavilion. Big among his acquisitions was Promenade Grove. This was Brighton’s first pleasure gardens, existing purely, “For the Amusement of the Nobility and Gentry” and boasting grass that was “smooth and velvety, like the pile of a Turkish carpet”.  Originally the land had been a farm meadow, known as Dairy Fields, leased by the Prince since 1795 and purchased in 1803 from Nathaniel Kemp (of Kemp Town fame).

But, having purchased all the land opposite the Pavilion, the Prince found himself with the tiresome problem of having a public roadway running through his property, right in front of the entrance. So, to give his residency privacy and link the Pavilion with the new stables and grounds, the Prince made an offer to the Town Commissioners - if they allowed him to close East Street, from its junction with North Street to Church Street, he would have laid out and surfaced a new road just a little bit further west. And, at a meeting of landholders, householders and inhabitants, held on the 25th August 1803, his proposal was accepted. On hearing the verdict the Prince apparently commented that, “the town would never lose anything by obliging [him]”. To make room for the new road, some gardens to the west of the Pavilion grounds, belonging to John and Thomas Furner, were purchased. Generally though, when acquiring land for the Prince, William Porden, the architect of the Royal Stables and Riding House, tried to keep costs down by exchanging plots not needed for the project for those that were. One such transaction took place in 1804 with the Shergolds, owners of the Castle Inn, who had stables that blocked the projected junction between New Road and North Street. It was agreed that the Shergolds’ stables would be exchanged for a large plot of land on the north west corner of New Road with new stables and coach houses to be built by Porden. The entrance to these large, commercial stables was on North Street, but the plot ran along the length of New Road. There were two stable yards, with 70 stalls for horses, standing for 30 carriages, a range of granaries and accommodation for the stable boys.

Construction of the new road was carried out under the supervision of Porden, with the actual work done by soldiers, probably billeted behind the King & Queen Inn and used to guard the Royal Pavilion. Contemporary accounts show £170, “for money given to the soldiers”. The road was opened in the Spring of 1806 and named New Road, not because it was new, but because it displaced an old thoroughfare almost on the site called New Street (now Bond Street).

Over the next 15 years, buildings sprang up all along New Road, trees were planted in 1812 and, by 1818, 15 houses were occupied. However, as a continuing measure of control, the design of all buildings erected had to be approved by the Prince.

Mr Cobb, a London lawyer, purchased the site of the present Theatre Royal, for £1,250 on a 999 year lease. Other plots of land were disposed of, in at least four cases, to local tradesmen who had provided goods or labour to the Prince in connection with the Royal Stables and Riding House and took land as a contribution towards settlement of their accounts.

The colonnade, once known as the Royal Colonnade, was originally built in 1806-7 in front of the Theatre Royal, but was extended around the corner into North Street in 1823. It was, by all accounts, a notorious haunt for prostitutes especially at theatre and music hall closing time.

The New Oxford Music Hall was opposite where the statue of Max Miller now stands. It opened in 1854, but was destroyed by fire in 1892. It re-opened as the Empire Theatre, then the Coliseum Theatre of Varieties, Court Theatre, Dolphin Theatre (The Dolphin House Clinic today), Her Majesty’s Theatre and, finally, the Paris Theatre. For a short period in the mid-1950s the building was converted into the Paris Continental Cinema, specialising in foreign films.

Amon Henry Wilds may have designed the building that stands next to Brighton Unitarian Church and is now Mister Smith’s Interiors. Next door, (Café Italiano) opened as the Regent Hotel, but was a Crabb’s wine merchants from 1808 until the 1980s.

On the eastern side, and adjoining the Riding House, the Prince had stables built for Mrs Fitzherbert that remained until 1935. Further down the road, on the present site of the Studio Theatre, there was an ivy-clad cottage - Dome Cottage - home to the royal coachman and his family. Kelly’s Street Directories of 1845 and 1862 (picked at random from the shelves at The Keep) list an array of different trades taking place in New Road including a General Post Office, milliner, bootmaker, furrier, gun maker, pawnbroker, surgeon, chiropodist and furnishing undertaker. Over time, and despite its proud heritage and cultural institutions, New Road became a bit run-down. So, in 2005, in a bid to reverse this trend and attract more visitors and local businesses, the Council created a new type of street. New Road is England’s first shared space street where cars and pedestrians coexist.

This innovative plan did not take away all the problems, in fact some would argue it created a whole new set of challenges for the residents and businesses, but no-one could deny that New Road is once again firmly established as the heart of Brighton’s “Cultural Mile”. 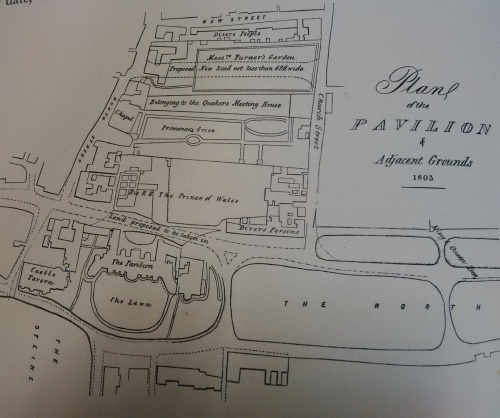 Proposed New Road “not less and 48ft wide” shown between Messrs Furner’s Garden and land belonging to the Quaker’s Meeting House which the Prince bought for £800. Map copied from “The History of the Royal Pavilion” Henry D Roberts.

Photograph courtesy of the Regency Society. The Dome Cottage, originally the coachman’s cottage adjoining the Prince Regent’s stables. Demolished in 1932. Photograph shows Mr F W Brown and his wife. He was works supervisor of the Pavilion Estate.