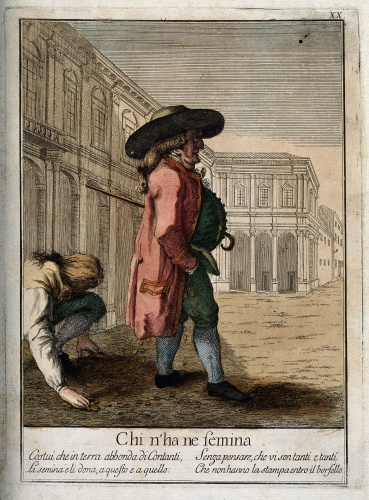 For centuries pockets have been an essential feature of dress, containing all the paraphernalia of a person’s life, from gloves, watches and money to pencils and sweets. Historically the term ‘pocket’, a Norman diminutive of Old French ‘poke’, referred to a leather or cloth pouch, or purse, suspended from a man or woman’s girdle, used since ancient times for carrying necessities such as money, tools and food. In the 13th century a ‘fichet’ resembling a modern pocket was introduced into western dress - a vertical slit cut into the outer robe or tunic, for easy access to the pouch or purse underneath. From the late-1400s and 1500s onwards pockets grew more commonplace.

During the 17th century interior pockets began to be sewn into men’s padded trunk hose and, as fashions changed, into knee breeches. Throughout the later 1600s and 1700s as the male ‘three-piece suit’ of coat, waistcoat and breeches developed, men’s breeches and coats both featured pockets. Coat pockets might be purely ornamental and in high fashion became the focus of elaborate ornamentation: however they could also be functional; for instance, the physician’s coat pockets contained his stethoscope and pills. Georgian and early-Victorian gentlemen’s pockets when positioned on the outside of garments were vulnerable to thefts by ‘pickpockets’, so increasingly pockets were sewn inside coat, breeches and waistcoat linings.

Many historical records mention pockets, including inquest reports into accidents, murders or suicides. Documenting the contents of deceased males’ pockets, 18th-century reports itemise a variety of personal articles such as wallets, coins, keys, seals, snuff-boxes, combs and watches. From this period onwards a gentleman’s watch was an important and valuable accessory: initially kept in a breeches pocket, later the Victorian fob watch had a chain suspended across the waistcoat front, the watch itself tucked inside a special waistcoat pocket. At the same time, labouring men’s pockets tended to be more practical: in the 1800s the large machine-made pockets of working jackets and coats contained the tools of the wearer’s trade, from chisels to paint brushes, as well as their packed lunch. Continuing their functional purpose, capacious pockets were a key design feature of the occupational overalls and dungarees worn by later generations of farm and workshop workers.

Unlike men’s pockets, ladies’ pockets remained invisible. From the 17th to late-19th centuries women’s large hanging pockets were generally tied on with strings around the waist, beneath the gown. Usually concealed in between different petticoat layers, these fabric pockets were accessed via slits in the folds of the skirt, some women wearing two sets of pockets at once. Pairs of pockets could be purchased ready-made from haberdashers’ shops, or the material to make them: like many dress articles, women’s pockets were often home-made, either in fabric to match a petticoat, or using old recycled textiles. Being personal items, attractive sets of pockets might also be presented as gifts.

Before handbags came into wide use, few women had a secure place of their own in which to store private possessions and so pockets were important for the safe-keeping of intimate items including letters, miniature pictures of loved ones, romantic tokens, and small, aptly-named ladies’ pocket books. Handy snacks like fruit, cake, nuts and sweets, coins and keys, and more feminine articles such as handkerchiefs, mirrors, perfume, smelling salts, scissors and thimbles were also commonly secreted in ladies’ large tie-on pockets. Because of the many possessions that women carried about with them, sometimes pockets were stolen from their person, skilled thieves in crowded public places cutting pocket strings or reaching up under clothes and pulling off the pockets. To guard against theft at night, some women slept with their pockets under their pillow.

Past records of Old Bailey Courthouse proceedings frequently document the prosecutions of pickpockets, the stolen items revealing pocket contents. For instance: ‘On 5 November 1716: Robert Draw of London, labourer, was indicted for privately stealing from Martha Peacock a linen Pocket (value 2 shillings), 1 Holland handkerchief (value 1 shilling), a pair of white gloves (value 1 shilling), a pair of scissors and 3 keys, on the 1st of December last, The prosecutor depos’d, that as she was going along the street, the prisoner came behind her, thrust his hand up her riding-hood (hooded cloak), and pulled her pocket off; that upon her crying out, he was followed and knocked down, and the pocket found upon him. The prisoner deny’d the fact, but the jury found him guilty to the value of 10 pence.’

Some women themselves secreted stolen goods in their pockets, from ribbons to yards of fabric, while street traders reportedly carried items as diverse as knives, potatoes and even live ducks! During the later 1800s, many more women became employed in shops, offices, banks and other white collar jobs requiring reliable time-keeping: increasingly they wore feminine versions of the businessman’s watch and chain, complete with special watch pocket integrated into their tailored bodice or jacket. Traditional interior hanging pockets disappeared with these changes and when clothes grew simpler and handbags became more commonplace in the early 20th century. Yet during the First World War, convenient patch pockets placed on the outside of workaday frocks, aprons and comfortable knitted cardigans proved invaluable, often containing the knitting or sewing that was always on the go and picked up whenever time permitted.

During the Second World War, as resources grew increasingly scarce, the Utility scheme and austerity guidelines from 1942 restricted the styling of clothing so that new garments used as little material and haberdashery as possible. Pockets in clothes were strictly limited and this also applied to men’s civilian suits, even to the design of military uniforms, with pleats and flaps being omitted from army tunic pockets as an economy measure. Subsequently, during the 1950s, plentiful pockets were revived and are still important today, in modern forms. Memories of older pockets still live on too, with this 18th- or early-19th-century rhyme, popular in Britain and America:

Lucy Locket lost her pocket, Kitty Fisher found it; Not a penny was there in it, Only ribbon round it