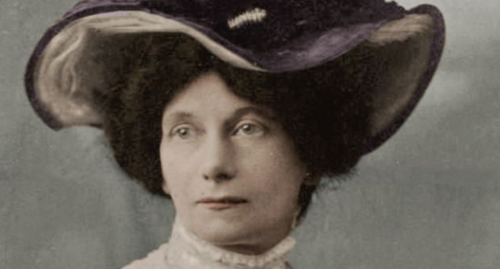 Earlier this year I attended the relaunch meeting of the Brighton & Hove Women’s History Group. After two years of being unable to meet there was, as you can imagine, lots to talk about! One of the items on the agenda particularly caught my attention – The Mary Clarke Statue Appeal.

Like most people I felt I knew a bit about suffragists, suffragettes, and their unquestionably heroic struggles to advance votes for women, but to be honest, I had never heard of Mary Clarke. The fact that she lived and worked in our city and was described as one of the most important figures in the fight for women’s right to vote and the first suffragette to die for the cause, made my ignorance worse. So, I decided to look a bit harder for this woman and try to reason why, unlike many of her contemporaries, her words and her deeds have not received greater attention.

Mary Jane Clarke (nee Goulden) was born in 1861 in Salford. She grew up exposed to radical political beliefs and activism: her parents took part in the campaigns against slavery and the Corn Laws; her mother was a passionate feminist; and her older sister was, arguably, the best-known suffragette of them all, Emmeline Pankhurst.

Mary married John Clarke in 1895, an abusive man who made her deeply unhappy. Divorce would not have been a realistic option for Mary, not least because of the expense involved and the scandal it would create, however, truly desperate, she did leave him. A courageous move, but one that may have adversely affected her standing within “respectable” Edwardian society, as may the periods of destitution and homelessness she experienced during the marriage.

But Mary found relief from what her niece, Sylvia Pankhurst, described as “the regretful memories of an unhappy marriage” by putting all her energies into the national London-based Women’s Social and Political Union and then the Brighton branch, where she became paid Organiser. And she was very successful in recruiting local women to the cause and obtaining the publicity the organisation needed to raise the issue of votes for women.

Unlike her more gregarious sister, Mary preferred to work behind the scenes, excelling in the administrative and organisational side of her role within the WSPU. Her shy, gentle character did not stop her from regularly campaigning in Brighton’s streets and speaking to large crowds on the seafront, fearlessly addressing the “Brighton rowdies” as they were known. On occasions when she was physically threatened some of her colleagues were inclined to strike out in her defence, but she always restrained them. Her way was to use intelligence, wit and good humour to disarm even the most hostile of hecklers, leading prominent Suffragette Lady Constance Lytton to comment on Mary’s “understanding of human nature.” Lady Constance was the key speaker at a meeting Mary chaired in Hove Town Hall on 23rd October 1909. She had been jailed twice that year after protesting at the House of Commons and is remembered for bringing to the public’s attention the class divide operating within the prison system, claiming that she received worse treatment when she posed as a working-class seamstress than when her identity was known. She also found a place in the history books for attempting to mutilate her body in pursuit of her aims - she had planned to scratch the words ‘Votes for Women’ on her skin, beginning over the heart and ending very visibly on her face.

Clearly, the approach Lady Constance took to her activism was different to Mary’s, but there are, unquestionably, parallels in their bravery and commitment to women’s rights. The two women spent time together when Lady Constance stayed at ‘Sea View’, the boarding house run by Minnie Turner at 13-14 Victoria Road, Brighton and home to Mary Clarke.

Minnie famously ran ‘Sea View’ as lodgings for WSPU members and visiting speakers, a holiday destination and crucially a refuge for suffragettes recovering from imprisonment, hunger strikes and forcible feeding. She advertised in suffragette newspapers, saying that she offered rest cures, home-made bread and “meals served in the garden”.

And the support Minnie offered was just what Mary needed as her work with the WSPU drew her into militant, non-violent resistance. In January 1909 Mary led a delegation to Parliament which resulted in her arrest and one month imprisonment. This was one of two periods of imprisonment for nothing more than attempting to petition the Prime Minister – legal activity which, if carried out by men, did not lead to arrest. Mary’s frail constitution was already weakened by her experiences, but regardless she attended the 18th November 1910 ‘Black Friday’ event outside Parliament. Here, over a six-hour period, 300 women were brutally beaten and deliberately sexually assaulted by the police. Mary was injured and deeply distressed. She returned to Brighton and was bedridden for three days.

Anxious not to be considered a “shirker” and ignoring appeals from friends not to expose herself to more violence, Mary returned to London on Tuesday 22nd November to join a delegation protesting about the police’s actions. On hearing that protesters had been arrested, including her sister Emmeline, she deliberately broke a police station window - almost certainly her first illegal act - and was arrested. When her sentence was pronounced, she telegraphed her Brighton colleagues: “One month. I am glad to pay the price for freedom”. Once in prison, Mary went on hunger strike and was forcibly fed.

After her release from Holloway prison on the 23rd December 1910, she attended a Welcome Meeting in Brighton, before going to spend Christmas with her brother in London. Mary collapsed two days later and died on Christmas Day, aged 49. The cause of death was a brain haemorrhage brought about, her sister and many others believed, by injuries sustained on Black Friday.

A moving memorial service was held for Mary in the Royal Pavilion, Brighton. Isabella McKeown, a Brighton Suffragette, rallied the mourners saying: “Her they must not mourn in silence. They must take the torch from her and light the darkness of craft and cruelty”.

Fanciful maybe, but I see this as an instruction from across the decades to ensure that this quiet woman, who preferred to use intelligence and reason as her weapons, but who had the heart and the courage to match any other, is rightly acknowledged. And, if we in Brighton don’t do it, who will?

For further information & to donate please visit the Appeal’s website at maryclarkestatue.com.  To donate directly go to localgiving.org/charity/mary-clarke-statue-appeal/ or https://www.paypal.com/gb/fundraiser/charity/3881341.

The current fundraising target is £35,000