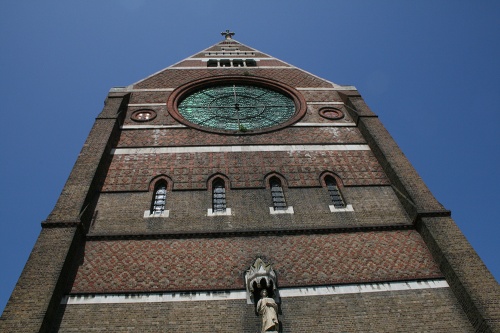 “In the noise and glitter of cheerful Brighton this great church is a tall sanctuary of peace. Its interior awes beholders to silence” (Sir John Betjeman)

How can you fail to be impressed by the sheer size of St Bartholomew's, the dominant landmark in the Preston area and now the only nineteenth century building remaining between London Road and the station.

This Victorian church, built in Italian Gothic style, is remarkable not just for its scale, but because of the vastly different attitudes people have towards it. Over the years some have regarded it as a folly, others have seen little more than a railway shed in the towerless and spireless structure, but mostly people have been intrigued by the supposed claim that it has the dimensions of Noah's Ark and awed by what appears to be its gravity defying construction.

I have tried to imagine what St Bart’s must have looked like when it was first built, how it overshadowed the surrounding small streets and how local people might have felt about it. In 1868, Rev. Arthur Wagner had built a temporary church on Providence Place along with a school accommodating 400 pupils, but after the death of his father, Rev. Henry Michell Wagner, Vicar of Brighton, Wagner resolved to build a more impressive new church on the site. He instructed a local architect, Edmund Scott, to do the design work and the foundation stone was laid in 1872. The building work was undertaken by a Brighton company, Stanning & Co., and cost £18,000.

The final plan shows the length as 170 feet, width 59 feet and a height of 135 feet to the ridge of the roof. The high, rather severe walls of reddish-brown brick, now aged to a purplish-brown colour, were topped by a steeply pitched roof with dark tiling. A mixture of red and black tiles was originally applied, but the roof was retiled in its present monochrome form in 1930. Running the length of the east and west sides of the exterior walls are a series of narrow buttress with tall, pointed windows. On the south side, an unusually large rose window dominates the area below the apex of the roof, upon which stands a nine foot gilt cross which brings the total height of the structure to an amazing 144 feet - making this probably the tallest church in England. Internally the immense height is emphasised by the openness and relative lack of division: the church is effectively one large hall, with nine shallow bays, which are formed along the nave by the internal buttresses. The interior walls are mostly made up of unadorned brickwork identical to that of the exterior, but this does not mean the church is in any way plain. Indeed, its beautiful decoration scheme by Henry Wilson, (combined with its size) led St Bart’s to be listed as a Grade I church. Among its treasures is a towering cross that lies above the alter and several brilliant mosaics by F Hamilton Jackson who was a follower of the Arts and Crafts movement.

The official opening of St Bart’s took place on 18 September 1874, but the stark and unusual design, together with its relatively opulent interior, caused considerable controversy at first. Some members of the clergy were distrustful of the extremely wealthy Anglo-Catholic Wagner and questioned whether the building was going to be used solely as a church, ridiculous reports were circulated about the building having 58 dark cells in which nuns or anchorites were to be kept. A variety of derogatory descriptions of the building were made, including "a cheese warehouse", "a Noah's Ark in brick", "a monster excrescence", "a huge barn" and "Wagner's folly."

All aspects of the building and its promoters were criticised, but the thing that upset the clergy the most was Wagner’s intention to make the 1,500 seats for worshippers free, when the usual practice was for individual churches to charge “pew rents”. The Town Council were none to happy with Wagner either. They had passed the original plans, but when the church was erected and the actual dimensions seen, they regretted giving permission. Their unhappiness was compounded when, having discovered the church was actually two feet higher than the plans had show, they found they were unable to take any meaningful action. The maximum fine they could impose was £2, a sum that made absolutely no impression on a man who had just spent £18,000 of his own money on building the church. Indeed, Wagner’s financial resources were such that when local residents complained that the height of the church caused downward draughts of wind, which caused their chimneys to smoke, he simply bought the houses and reduced the tenants' rents, in order to avoid continued objections.

It seems that it was impossible to be indifferent to St Bart’s and, just like the Victorians before us, we too have our own attitudes to this unique and outstanding building. It may be Rev. Wagner’s reputation for building churches in poor areas of Brighton and offering free seats to all thus breaking the pew-rents ring; the idea that religious hermits were housed in dark cells or simply the unusual appearance and sheer height of this building that interests you. It could, of course, just be the wonderful acoustics that hold you enthralled.